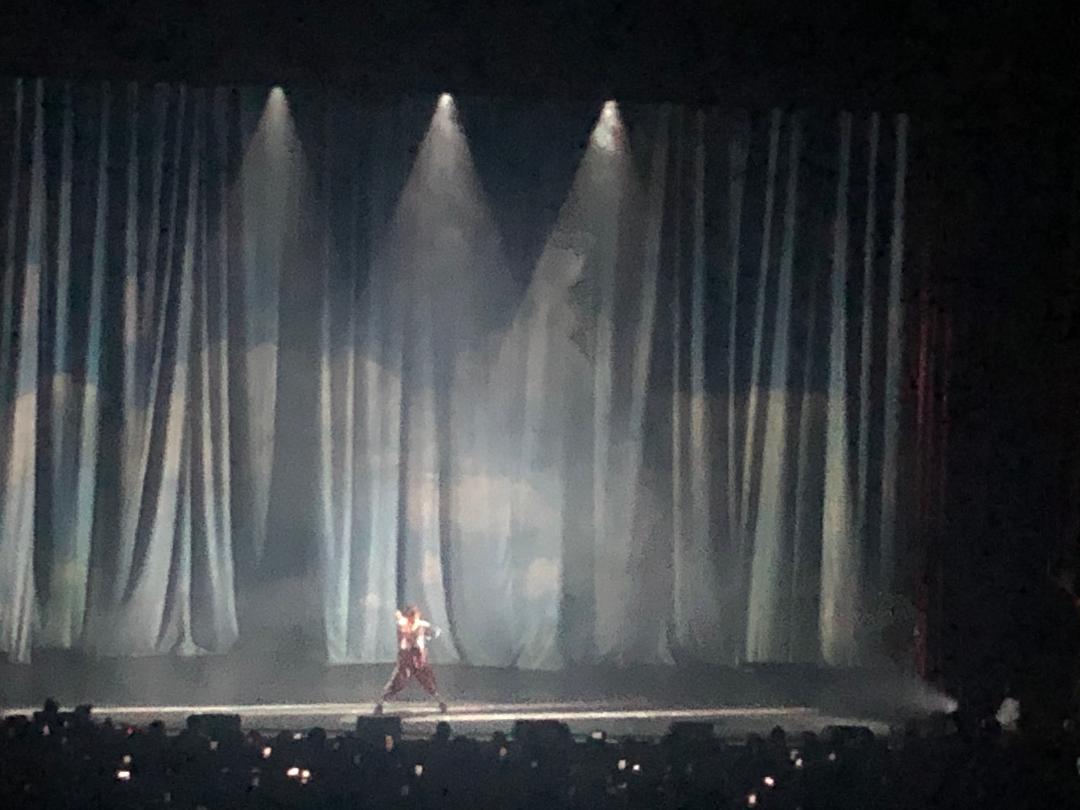 The other day, I finally had Popeye’s next great level, jazz for the mouth, black experience like someone’s Grandma once made, chicken sandwich. It’s a really good sandwich and an instant fast food classic, but I was a little disappointed after all the reviews. That’s the way I felt about the English singer songwriter goes dance artist FKA Twigs. I am a huge fan of the formerly, formerly known as Tahliah Barnett:  I saw her on stage on 2014 (here), admired her current Magdalene, and absolutely bought into every five star review of the tour that arrived last night at Kings Theatre in Brooklyn.

It seemed more than plausible that Tahliah had made a seamless merge of modern dance and hi-tech confessionals, and certainly deserved last night’s sell out. But in a year featuring Björk’s game changing perrformance art, “Cornucopia,” at The Shed and Madonna’s extraordinary and deeply flawed theatre of the real “Madame X”, FKA Twigs dance is sub-contemporary work you can see at Joyce Theatre (their interpretation of David Bowie here) any given day, and while the sound is immaculate and gorgeous, from my place in the 3000 seat theatre, it still sucked, still too far away. The usual complaint: no close circuit TV, so the steep seating area made her even further away, and we can only guess whether she looked sincere. Plus… what, the actual, fuck: no opening act, doors at seven, she got on stage at 908pm.  Maybe she is the greatest dancer of all time, who knows? All I could see was her bending her knees (actually, I do know, checkout her videos)

Another problem, Magdalene‘s story of emotional submission and break-up was a whole lot better before I realized it was about white shadow Robert Pattinson. Perhaps it’s me, but what do you think you’re gonna get from a man whose profession is the feigning of emotional commitment? Really, that many tears over him? Also, in 2017  she underwent surgery to remove fibroid tumors from her uterus. That is worth singing about, the uterus isn’t a metaphor for love, it is where love’s finishing end expression occurs, there is a clear connection but she never connected them for us.

The production itself was very good. Tahliah starts by tap dancing in front of the curtain before performing three songs solo, the curtain then comes down and is replaced by white, gossamer and ethereal curtains and four dancers, which comes down around the eighth song of the evening to show the stage proper, a variation on Jailhouse Rock’s cell blocks, with a three piece band programming computers. Twigs doesn’t speak much to the audience except to make sure we are a part of her story -“how many people are here alone?” is her first question after telling us how much she loves New York, and, despite my distance, it is a personal and engaging mix to show true, real, empathetic and compassionate feelings.

Which makes it all the sadder that it is just not quite good enough. Sure, she, unlike a lot of people, can dance, her outfits are beautiful and eye catching, and like Aretha Franklin circa Sparkle, she is confused and confrontational to the need for a submissiveness that echoes Mary Magdalene’s towards Jesus (though not as pretentious as it sounds). Her dance, if it is an interpretation of those feelings, doesn’t feel like one though distance will obviously effect that. How can you do dance if you can’t make out the movements, which from my distance seemed perfunctory. Her pole dancing was thrilling during “Lights On,” it is just a pity you can’t really see her. A sword dance seemed like a lotta fun… But she had to keep on changing outfits for her various tableaus and I spent a goodly portion of the evening having no idea where she was.

The highlights were both off Madalene and both had her simply singing to the audience. “Cellophane” -one of the best songs of the year. closed the evening , “Didn’t I do it for you? Why don’t I do it for you? Why won’t you do it for me? When all I do is for you?” is perhaps the best opening of a song this year, and as it backed away from love, she transformed it into a question for the audience. Even better was a song that was just an also ran on the album, “Mirrored Heart”, “I’m never gonna give up though I’m probably gonna think about you all the time” echoes a found truth shared. Her soprano here is all ache, all tumultuous closed doors.

I am considering ponying up for a better seat and going again tonight so I guess she did do it for me.