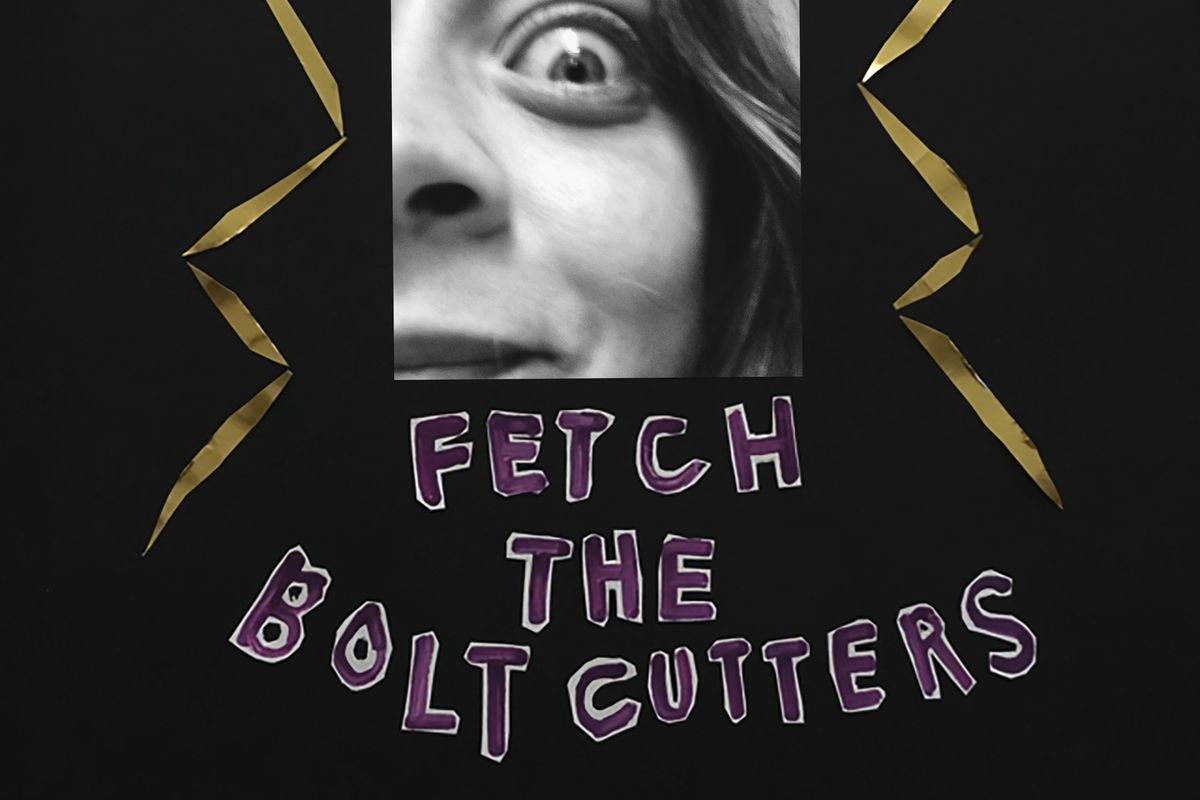 Fiona Apple has always been in a league of her own, all fire and passion, unruly and free, a true artist who has never followed any conventions and norms and has even made her fans wait eight long years for a new album. ‘Fetch The Bolt Cutters,’ named after a line said by Gillian Anderson’s sex-crimes investigator, was released this Friday and has already received praises from many, even rewarded with a perfect 10 by Pitchfork, when does this happen seriously?

The recluse and elusive Fiona may have spent several years writing and recording ‘Fetch The Bolt Cutters’ but one thing is certain, the album is full of life, and driven by some buoyant energy embodied by a galore of beats, a fierce delivery, and an unapologetic stare at the things of life. Overall, it is a very stripped-down collection of songs, and I sometimes miss her sumptuous keys which nevertheless shine with the opening song, ‘I Want You To Love Me,’ and its cascading piano lines collapsing and raising again, rushing toward her words, her very dense and wordy lines. The song roars and riots like a feisty tide of keynotes while Fiona’s emotional and intense voice breaks into a demented falsetto in the end.

There’s simply no music like this anywhere you look. If there are traces of cabaret, jazz, avant-garde, blues or even Sondheim musicals, nothing sounds like her music or a million things sounds like a million things she puts in her music. Her amalgam and unruly songs are filled with percussive sounds, glorious beats, obsessive drums, deep bass lines, multi-voices choruses, handclaps, whispers, humming, dog barks and post-recording parts which could have been left by mistakes, while they sound completely essential. There is the chant at the end of ‘Relay’ and the humming at the end of ‘Cosmonauts,’ working like little intimate parts of life Fiona seems to have recorded only for herself.

The feel of the album is often intimate because of the stories she tells, but also because of its organic sound, the production looks home-made, while the music and Fiona’s voice resonate as loud as if you were sitting right in the middle of her Venice Beach cottage where she recorded the songs. The sound is banging against the walls of the room, Fiona’s restless breathing is palpable, and she looks at you with this deep and intense stare of hers, almost asking, what are you doing here?

The melodies are there, all habited by Fiona’s big full voice, always raw, emotional, angry and vulnerable at the same time, while the structures of the songs are breaking any rules, they are upside down or looping over each other, they shake and shift, they are broken apart and put back together in a new unknown and chaotic symphony: Fiona will surprise you at each turn, she is rearranging the furniture in each room of her songbook.

She is in full attack with ‘Shameika,‘ angry and passionate, almost rapping her high school bullying stories ‘Shameika said I had potential,’ she repeats very seriously. The title track is a meditative flashback to her early career, when ‘All the VIPs and PYTs and wannabes’ were ‘afraid of not being your friend’… a dog bone percussion tune, about ‘breaking free from a prison you built yourself,’ she has explained, ending in a barking concert.

The album is filled with personal confessions and little pieces of life put together like puzzles, the stories are both precise and partially enigmatic, while the narration is vivid and often filled with humorous and biting details ‘Kick me under the table all you want/I won’t shut up, I won’t shut up,’ she sings during ‘Under the Table,’ narrating an unwanted invitation with stabbing keys and an unmerciful tone. ‘Check out that rack of his! Look at that row of guitar necks/Lined up like eager fillies, outstretched like legs of Rockettes,’ she playful sings in ‘Rack of His.’

All the songs are inflamed by catchy rhythms, each time Fiona seems to go back to the genesis of rhythms with liberating loops, and this is particularly true during ‘Relay’ a triumphant exorcist-like dance with the mantra ‘Evil is a relay sport/When the one who’s burnt/Turns to pass the torch.’ If she is stirring up ancient deep anger, she takes a stab at social media with the great line ‘I resent you presenting your life like a fucking propaganda brochure’ – while she ignores all of them in real life.

When you reach ‘Rack of His,’ ‘Newspaper,’ ‘Ladies,’ and ‘For Her’, you realize how much the album is about woman solidarity, from worrying about girlfriends of her exes to raging about newspaper headlines at a time when male abusers and sexual violence are at the center of the conversation. And Fiona knows something about this, she was raped at 12 and has been open about it very early on. If a lot of her past and new lyrics could refer to her trauma and other women’s trauma, ‘Fetch The Bolt Cutters’ also celebrates Fiona as a full force of nature, ‘I spread like strawberries (I spread like strawberries)/I climb like peas and beans (I climb like peas and beans)’ and even contemplates the possibility of romantic love, ‘Oh, you and I will be like a couple of cosmonauts/Except with way more gravity than when we started off.’

The album is rich and filled with new discoveries at each listening, ‘Newspaper’ has the percussive angst of her earlier work ‘Sleep to Dream,’  while ‘For Her’ is a jubilant gospel of voices, a fast outburst of bold energy, which even incorporates a ‘Good Morning’/’ Singin’ in the Rain’ line before crashing with the revelation ‘You raped me in the same bed your daughter was born in,’ … try singing that part to yourself.

In an era when all albums are overproduced and vocals autotuned to death, Fiona’s new album goes in the opposite direction, bringing rawness first row with passion and a unique approach. Drums and voices – mostly hers and Maude’s, her sister – are always the stars of ‘Fetch The Bolt Cutters,’ but they evolve with an unbridled, often hypnotic creativity and a full fist in the air.