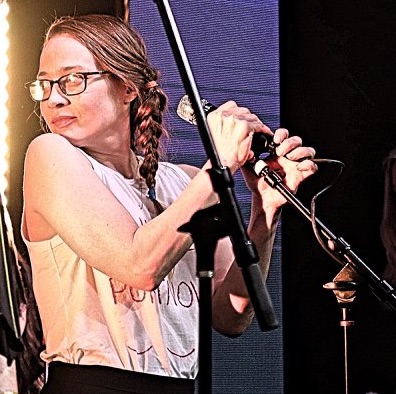 Fiona Apple has been in the news lately, she announced she would probably release a new album early 2020, she said she would donate two years of royalties from ‘Criminals’ to an organization that assists refugees, and 2 days ago, she gave a rare interview to Vulture. It’s a great read and an unusual interview as you would expect it to be with her, without any bullshit in sight, she is being very Fiona Apple, sharing every detail and fighting for the good cause. Fiona is strong on justice and that’s one of the reasons why I love her.

Her 1996 song ‘Criminal’ is used in Jennifer Lopez’s recent film ‘Hustler’, and in a bizarre incident, Variety’s Twitter account used a video to promote it but dubbed the word ‘refugees’ giving the impression that Apple was donating royalties to the movie. Of course, this didn’t sit very well with the fierce singer-songwriter.

If the interview also mentions Fiona Apple not letting Panic! At the Disco use a sample from ‘The Idler Wheel’ and Brendon Urie calling her a bitch, one other thing was apparently not included in the interview (there is an update now). Fiona immediately corrected it and a video was posted on the Tumblr fan site Fiona Apple Rocks (because Fiona doesn’t care for social media).

In the short clip, Fiona is calling out Lil Nas X for precisely sampling one of her songs, ‘Every Single Night’ in his 2018 track ‘Kim Jong’, which was released before he became famous with his remake of ‘Old Town Road’. Here is what Fiona Apple says:

‘One thing that the lovely Rachel Handler didn’t mention, that I did say in the interview which I would just like to say now is that Lil Nas X … you’re probably really great, but you used my song ‘Every Single Night,’ too. You sampled that song, too, in a song called ‘Kim Jong Un,’ I think. And, um, hey … where’s my money, you cute little guy? Where’s my money?’

I just wonder why this was not included in the interview? It looks like a great point, especially after the Panic! At the Disco incident. Maybe the interviewer didn’t want to piss off Lil Nas X and his producers? But, when Fiona speaks, it’s always a no-bullshit zone. It seems that Lil Nas never made any money off that obscure track, which was posted on Soundcloud (and never officially released?), but I just want an answer from Lil Nas, at least he could call her a bitch…