Finnish Black Metal Band Horna Got Their Shows Canceled… Or Not? 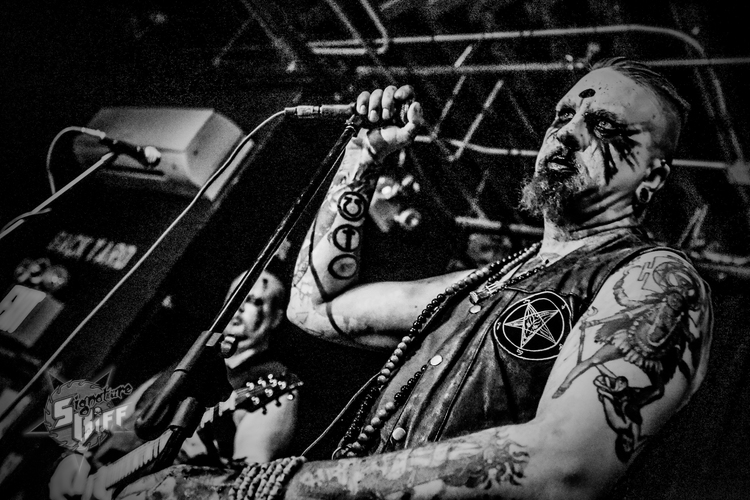 Metal bands can be scary looking and deafening sounding, but most of the time, I don’t take them seriously? It’s all an act after all, right? Except when it’s not an act…

Horna, a band from Finland which is described as ‘one of the best and most important Finnish black metal bands’, was supposed to tour the US with a stop at the 5 Star Bar here in Los Angeles this weekend and several other dates in Chicago, Brooklyn….

The problem is that several websites, and especially Metalsucks, are reporting about the band ties with NSBM, aka National Socialist Black Metal, something difficult to deny when you know about a song recently released by the band with the terrible line: ‘The destruction and death of the Jewish people’…

Plus according to Metalsucks, guitarist Shatraug was also a member of the band Blutschrei, whose album (‘The Voice of Forbidden Pride’) and songs such as ‘White Agony’ only reinforce the fascist association with lyrics such as ‘If we don’t change the course, our culture will be dying’, or ‘Mother Europe, here I stand, a proud son today and a white father tomorrow’ among other examples of white pride demonstration. According to Metalsucks, Shatraug’s ex-label also released albums entitled ‘Kristallnacht’ (it speaks by itself) or Hammer (which shows a swastika on the cover). On the other hand, vocalist Spellgoth is also part of a French black metal band ‘Peste Noire’ (black plague) whose founder, La Sale Famine de Valfunde, claims to be part of ‘right-wing anarchism’ and describes himself as a ‘French national-anarchist’ with a 2001 demo called ‘Aryan Supremacy’. The cover art and logos are also very telling, as one album art includes blackface with a noose and a Ku Klux Klan hood.

The Metalsucks article gives even more details about Horna’s fascist, racist, antisemitic, and white supremacist links, despite the band denying them. Horna put the following statement on their facebook page: ‘Regarding recent publicity, HORNA has never been and never will be anything but Satanic Black Metal. We judge every man and woman only by their demeanor, not by their race or sexual preferences. We have zero interest in politics, left or right.’

They are not Black Pussy, a band which triggered the same kind of outrage on social media a little while ago when they were about to play at the Hi Hat, Horna’s ideology is certainly problematic, and once again, social media fired up, and the show was canceled as well as many other shows all over the US…. Except for the Karman bar in Laguna Beach

This is what was posted by Hate War Productions, the promoter of the band’s tour:

‘Welcome to the Extreme Metal Scene in 2019.

The 5 Star has been under constant attack receiving ridiculous threats for hosting this show. They were trying to stand strong but at the end of the day, it’s his business & how he makes his living so I can’t blame him for not wanting to move forward. Maybe if enough of you message them your support it could help………….

In the meantime I have a small army searching for an alternate venue. With such short notice, there’s the chance that whatever we find may not be able to hold as many as the backroom. The Karman Bar is 100% behind the show tonight so if anyone wants to come tonight we’ll honor your Saturday ticket. Please print out the transaction so we can keep it to adjust the list for Saturday.’

It’s always very delicate to write about a band like Horna, because of the direct publicity it gives to an underground black metal band with terrible political views… you mention them and it brings attention to them, you don’t mention them and their social nationalism mini rally can go on. But I just wonder what is accomplished when a show like this one is canceled, as the promoter said, they find another venue and the show can go on somewhere else? People are happy because it doesn’t happen in their neighborhood, but so what? Horna is still playing in California, and the most confusing part, according to the many comments I have read, is that the show will also be attended by many Latinos who are into metal.

The cancelations are a few other victories accomplished by the Antifa and some satisfied social justice warriors but so what? I have always been against censorship because it doesn’t accomplish anything and always defeats its own purpose. As a matter of fact, there was an update posted by Hate War Productions on the 5 Stars Bar event page:

‘Horna will perform in LA on Saturday. Be patient – an announcement will be made when the time is right.’