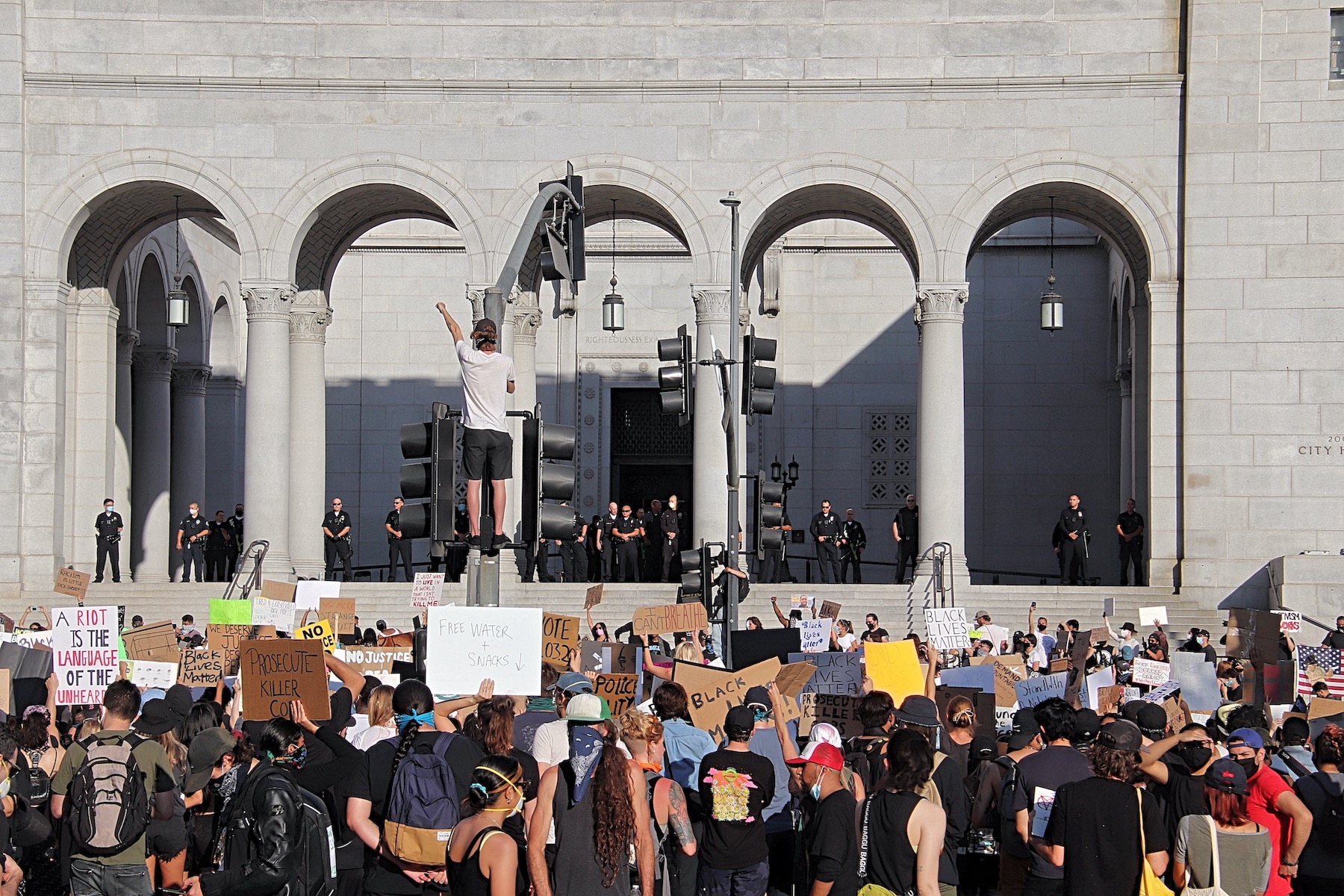 ‘Fifty Shades of Black and Blue,’ I stole this title from Ice Cube’s Twitter feed because it is summing up the situation very well. I am going to a lot of protests and I haven’t seen any celebrities there so far…. If some of them have been spotted at the protest which took place in Santa Monica over the weekend, I haven’t seen any of them wanting to lead and hijacking the event by talking to the crowd. Such a move would have been very unwelcome anyway, this movement belongs to the people, and everybody has understood that. However, many of the action occurs on social media, and in particular on Twitter.

Every time I go on Twitter, the first tweets I see are very often those of Chuck D, Ice Cube, and Tom Morello, among others. Probably because they have even been more vocal lately, and because I took the time to check them more often these past days. They are not the only ones — everyone has listened to Killer Mike’s moving speech last week — but it is so thrilling to see them sharing their take on the situation. From police brutality to the mismanagement of this crisis by our government, these are subjects that they have obviously never ignored. Right now, is there anything else that matters besides this fight for justice? Of course not, I am still receiving press releases for indie bands releasing some debut album, but honestly, should they expect us to be focused on anything but what’s happening in the streets? It is indeed fifty shades of black and blue on social media 24/7. And you have to sort out the bad from the good, the right from the wrong.

People in the streets are asking for a profound reform of our society, for defunding the police and an overall radical change and the Chuck D, Ice Cube and Tom Morello of Twitter are basically saying ‘we have been telling you to do this for years, even decades…’ But more than a told-you-so moment, these men rise to the occasion, their discourses are on point, direct, informed, sometimes funny and you can feel this spark of victory at each of their tweets, wrapped with their usual high confidence level. And look at what we have already achieved? All 4 police officers involved in George Floyd’s murder have been charged and Los Angeles mayor Eric Garcetti has announced a cut in the LAPD budget, a still very small cut compared to their huge budget but it’s a start. And all this would not have happened without the protests.

Since the president basically addresses the nation (and the world) through his Twitter feed on a daily and nightly basis, these men have basically the same platform, and even though DJT has more followers, there’s no possible comparison when you read the contents. Here are a few examples.

They’d rather arrest hundreds of American citizens then 3 of their own. Very telling.

Stop calling yourselves ex-slaves. Our ancestors were POWs. They fought to keep us there and were overpowered by gun powder (then turned into slaves). And every black person ALREADY in America were turned into slaves.

IT SHOULDN’T TAKE ALL THIS TO START THE PROCESS OF SIMPLE JUSTICE. Keep pruning that “BAD APPLE TREE” cause American Pie always taste better with flavor in it.

Really anybody making excuses for this WhiteHouse cat needs to get tested. I swear maybe he’s the smart one who celeb-pimped & CONvinced the most rural IQs of the USA thinking this gameshow- hustler gives a damn about anything or anyone else. Dude is Nixon1974 2.0-Feels like it pic.twitter.com/1vGT3ErA1I

So um now CIC is the King of reality TV and the whole planet is watching on their phones. Now the chess match question is-IS the USA a democracy or dictatorship? The swell will probably increase beyond just gettin Chauvinist.. the world is awaiting CIC to simply leave office-NOW

Deutschland 1933. I remember some limitHeads dissing my opinion here a couple years back when I said removal of freedoms & the climate was 1928-33 Germany-Trump threatens to crack down on social media platforms after Twitter labels his tweets – CNNPolitics https://t.co/a4sgT22vtw

We will not be waiting til November https://t.co/ACM9o9nbCG