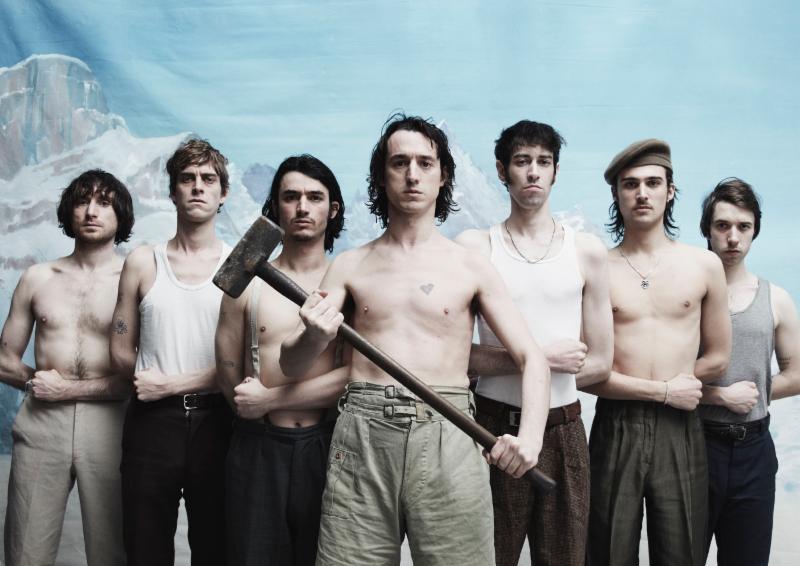 to “Tastes Good With The Money”

the latest track from their forthcoming album, Serfs Up!

Listen to the track HERE

Following the recent announcement of their third album, Serfs Up!, Fat White Family have shared the video to “Tastes Good With The Money”, an absurd Monty Python inspired ‘romp’ directed by Roisin Murphy.

Talking about the video, Roisin said:

I’ve been making it known for years how much I wanted to make a video for this band. I’m a massive fan of FWF and I’ve been chasing this opportunity for a long time. I used every possible connection I had, I have asked people to ask people, I’ve contacted the band on social media, I really set my heart on this. For me there’s such a charm about them and an authenticity that’s actually incredibly rare. I knew I could not possibly work with a more magnetic bunch of performers.

The idea of referencing Monty Python partly came out of the somewhat absurd and confusing political landscape that we are now living in Britain, Python seems prescient. The British laughing at themselves, a certain kind glee even in the loss of empire, singing as the ship goes down, well it just seems so…of the moment. There is this deep ambivalence to the establishment that resonates with the Fat Whites own irreverent world view.

Most of all I wanted an idea that would give them the confidence and the space to really let go and just perform, too allow them to be raw in what is essentially an unnatural situation for a bunch of ne’er do well musicians.

When I look at the video, what I see is the trust they put in me and I’m so proud of that. Maybe it’s because I am a performer too but they let themselves be put in a kind-of vulnerable situation; they allowed themselves to be foolish, silly and absurd in a way that could have gone tits-up, however, the result is hilarious and the performances are second to none.

Having recently played two intimate sold-out shows at the Lexington in London, the band head out on a headline U.K. tour in May.

Tickets for the shows are available now via www.fatwhitefamilymusic.com

Having released their second album, Songs For Our Mothers, in January 2016, core members Lias and Nathan Saoudi relocated to Sheffield and set about writing the album. Joined by co-conspirator Saul Adamczewski and recorded at their own Champzone studios in the Attercliffe area of the city, Serfs Up! was finished in late autumn 2018 with the help of long-time collaborator, Liam D. May and features a guest appearance from Baxter Dury on “Tastes Good With The Money”.

Serfs Up! is a lush and masterful work, lascivious and personal. Tropical, sympathetic and monumental. It invites the listener in rather than repel them through wilful abrasion. Fat White Family have broken previous default patterns of behaviour, and as such their third album heralds a new day dawning.

Serfs Up! will be released on April 19, 2019 and will be available on CD (WIGCD401), standard vinyl (WIGLP401), cassette (WIGMC401), Dom Mart exclusive vinyl (12” heavyweight transparent red vinyl with fold out poster – WIGLP401XM) and via digital download (WIG401D). You can pre-order Serfs Up! HERE.