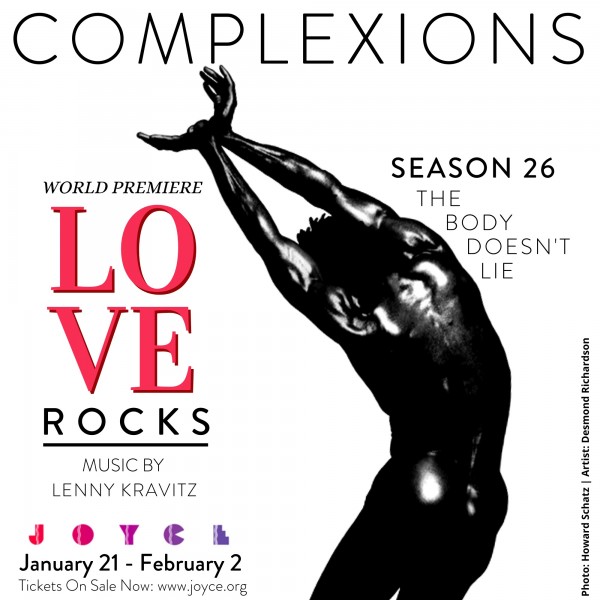 Lenny Kravitz is a magpie of a rock star, he doesn’t birth or originate, and not in the sense that Prince didn’t originate his funk but developed it from Sly Stone’s template, but in the sense that his music copies the hallmarks of black classic rock, specifically Prince and Jimi Hendrix, without moving it anywhere at all. That made him the most actively disparaged musician till he got lucky and Rolling Stone amusingly anointed Gary Clark Jr. to the ranks of the new Jimi.

Which makes Kravitz nothing if not a bemusing choice for Desmond Richardson and Dwight Roden’s 26 year old  company Complexions Contemporary Ballet. In 2017 Complexions presented (here) a David Bowie dance  tribute (the first of two parts, we are eagerly awaiting part two), the only tribute for Bowie worth your time at all after the disastrous Carnegie Hall one by City Winery, as well as Tony Visconti’s attempted cash ins. “Stardust” takes something that we all honor in Bowie, sexual ambiguity and high-low culture, and exploded it. But Bowie is conceptually complicated, it is easier to choreograph ideas that are simple to grasp, like every last one of Kravitz’s. If you don’t think Dwight Rhoden knows precisely what to do with the bathetic “Here To Love” ( sample lyric: “We must all unite for we are one creation, we must join the fight, together we are strong, We must do what’s right in every situation, love each other’s lives as you would do your own…” doesn’t Lenny speak English?), you don’t know Rhoden. The sixteen member ballet, eight men,eight women, perform extended solos, pas de deux, pas de quatre, before joining together to extend themselves in love. It is a simple idea, Rhoden barely need consider Kravitz’s conception, he could place the dancers right at the heart of moldy ballad “Calling All Angels” and it still shines through.

The world premiere of the Kravitz “Love Rocks,” was the second half of Saturday afternoon’s Program C, the first was “Essential Parts: A Compilation of excerpts from Complexion Contemporary Ballet repertoire” and it is so good. Two dancers, the muscular and lithe Jared Brunson and the muscular and lith and exceedingly tall Jillian Davis, command any part of the stage they are dancing upon, they are commanding the way the leader of a band might be, of a Mick Jagger, they are doing what everyone is doing but they have magic in them, it is riveting , the other dancer who knocked me flat was Daniela O’Neil -her curly haired naturalism was in sharp relief to the teutonic metallic power and grace of the ensemble.By opening “Essential Parts” with classical composer Kaikhosru  Sorabji -born of an English mother and a Parsi Indian father, the homosexual when homosexuality had a whole lotta headaches, Rhoden is clearly actualizing a sense of openness, painted gloriously on Billy Porter’s  “My Man” (I thought it was a Sam Smith track I wasn’t aware o) , performed by Jared Brunson and Larissa Gerszke, a superb dancer I could watch all day. This unambiguous, libertarianism reaches its zenith a little later with an excerpt from “Woke” (“galvanizing protest rally of a ballet” (Hyperallergic))  performed in response to the news reports we are battered with on a daily basis,  and accenting where hip hop and modern ballet meet, where the beats are anything that stops and then starts, this is clearer, and a clearer explanation of where Complexions concerns are during”R.I.P. (Rewind In Peace)” by the English spoken word poet Suli Breaks. Just as good is a return to “Wonder” -first performed during Complexions first season in 1994, to Stevie Wonder’s “All In Love Is Fair” (from one of the greatest albums of all time, Innervisions), as Robert Christgau noted “(Wonder)  is technical/physical rather than logical/conceptual”.  Technical/Physical could be a description of ballet. And of Lenny Kravitz, of course.

Complexion’s “Stardust” was exceptional on every level, including having the dancers lip sync, because when you lip sync to “Lazarus” you are in the business of rebuilding Bowie. “Love Rocks” is gorgeous, perfectly performed, and deeply felt, but Lenny could never add a dimension, he isn’t that guy. He is a technician of feelings, and like, say John Legend and Common, he sinks into cliche. But if Rhoden is choreographing a world of love to express his political belief in racial and sexual equality in the face of  increasing hostility during the rebirth of national hatred, simplicity is a better weapon. Then why is Kravitz’s best song, the 1993 (the year before Complexions was founded) “Are  You Gonna Go My Way” also the highlight of “Love Rocks”? To put it simply, and from a music guys perspective, for all the gorgeousness of the interlocking bodies and sensual embraces of the dancers, “Calling All Angels” isn’t the song you wish you were hearing.

The dancers were so beautiful, a physical and emotional coming together, unfettered by tradition, it flies in the face of perceptions of ballet and emerges on the side as something that should truly be seen by rock fans. Hell,  if they can make Lenny Kravitz bearable there is nothing they can’t do. You can catch its final two performance of Program C  at next weekend matinees. and still make it back for the Superbowl.