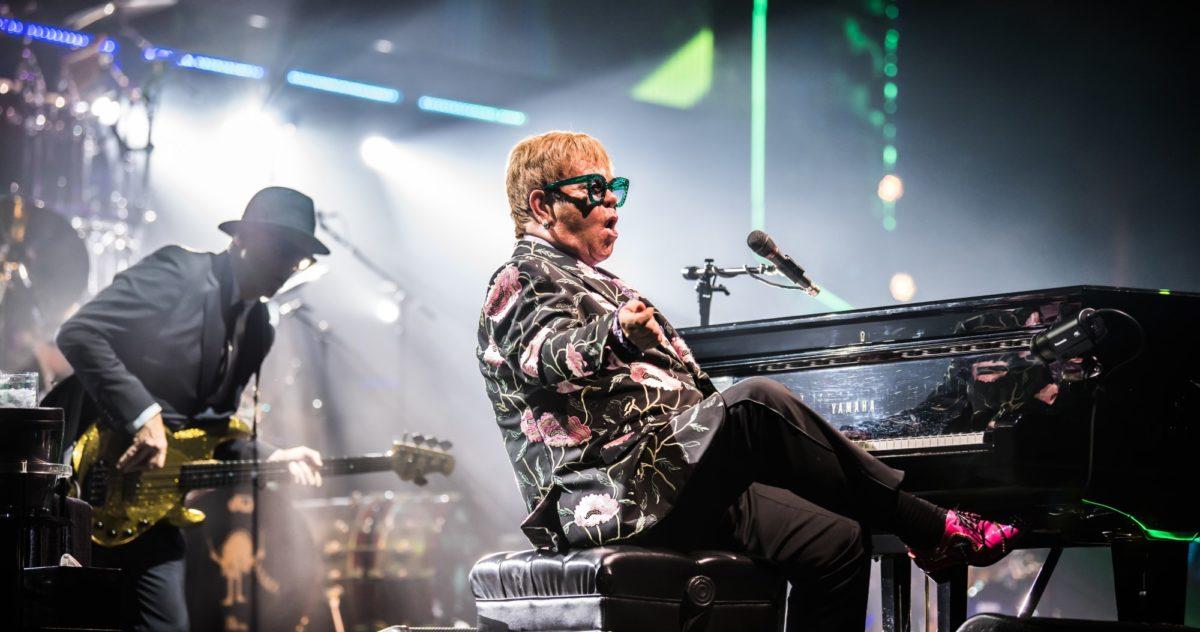 There are times when you go to a show with no expectations except you know what to expect – and it isn’t a bad thing, when it’s an artist the caliber and legend of Elton John.  He’s been on this endless “Farewell Yellow Brick Road” tour, which will run until 2020 and his greatest hits show at Barclays Center in Brooklyn on Saturday, March 9th, is proof positive is that you can still have fun, churning out (and listening to) the hits.  I think it’s simply because he’s giving the fans what they want and they’re happy to receive it – especially, if this is, indeed, his final tour.  He’s been at it, night after night, and even though his voice isn’t what it was (he doesn’t do the falsetto vocals he was famous for), it was strong, held up and had the necessary passion and gusto for the three hours he was on stage.

The last time I saw him was 35 years ago at Madison Square Garden, promoting the Breaking Hearts album (when the “Sasson Say So Much” jeans campaign was at a successful fever pitch) and even then, his show was a 3-hour event (it was an incredible performance that actually reawakened my fandom, as it had been dormant since 1976 or so). The only thing he’s promoting now is his love and thanks to the fans that have sustained him for nearly five decades.  So now, I’m in my 50’s and here I am, just a kid again, watching this man whose 45s are still in my collection and it feels quite right to say my goodbyes to this old friend.

The show started at a few minutes after 8 and kicked off with “Benny And The Jets” to rapturous applause and a crowd singalong; the band quickly spun into “All The Girls Love Alice” and then into a powerhouse triad of “I Guess That’s Why They Call It The Blues”, “Border Song” and the (always chill-inducing) “Tiny Dancer”.  The band, which features his very long-time regulars Nigel Olsson on drums, Ray Cooper on percussion and Davey Johnstone on guitar, were tight and absolutely spot-on.

It’s slightly ridiculous to try to say “another highlight” as this show was filled with peak moments – it is, after all, a greatest-hits-of-a-legendary-career concert – but the five in a row of “Rocket Man”, “Take Me To The Pilot”, “Someone Saved My Life Tonight”, “Levon” and “Candle In The Wind” was blinding – again, played with emotion and energy (a lot of people up and dancing throughout).  I would have to say – on the personal side – my favorite part of the show was “Crocodile Rock” (which was “dedicated to my fans – I love you.  Love, Elton.”, projected via the screen behind the musicians) into “Saturday’s Alright  For Fighting”, since they rank up there as my #2 and #3 favorite Elton songs (“Texan Love Song” has been my favorite since I bought Don’t Shoot Me, I’m Only The Piano Player in 1973).  For the encore/finale, the crowd sang along a very teary “Your Song” and the show closed with “Goodbye Yellow Brick Road”, after which Elton and the band were sent off, amidst a rousing, standing ovation.

All in all, it was a fine send-off for someone who’s been a part of my life since 1972; like so many other musicians who are now at the end of long and illustrious careers, I am very glad I had an opportunity to take part in saying farewell and thank you to Elton; his music has meant a lot to me – he was a cornerstone of my musical childhood – and the takeaway was hearing those songs one last time by the artist who gave them to me.