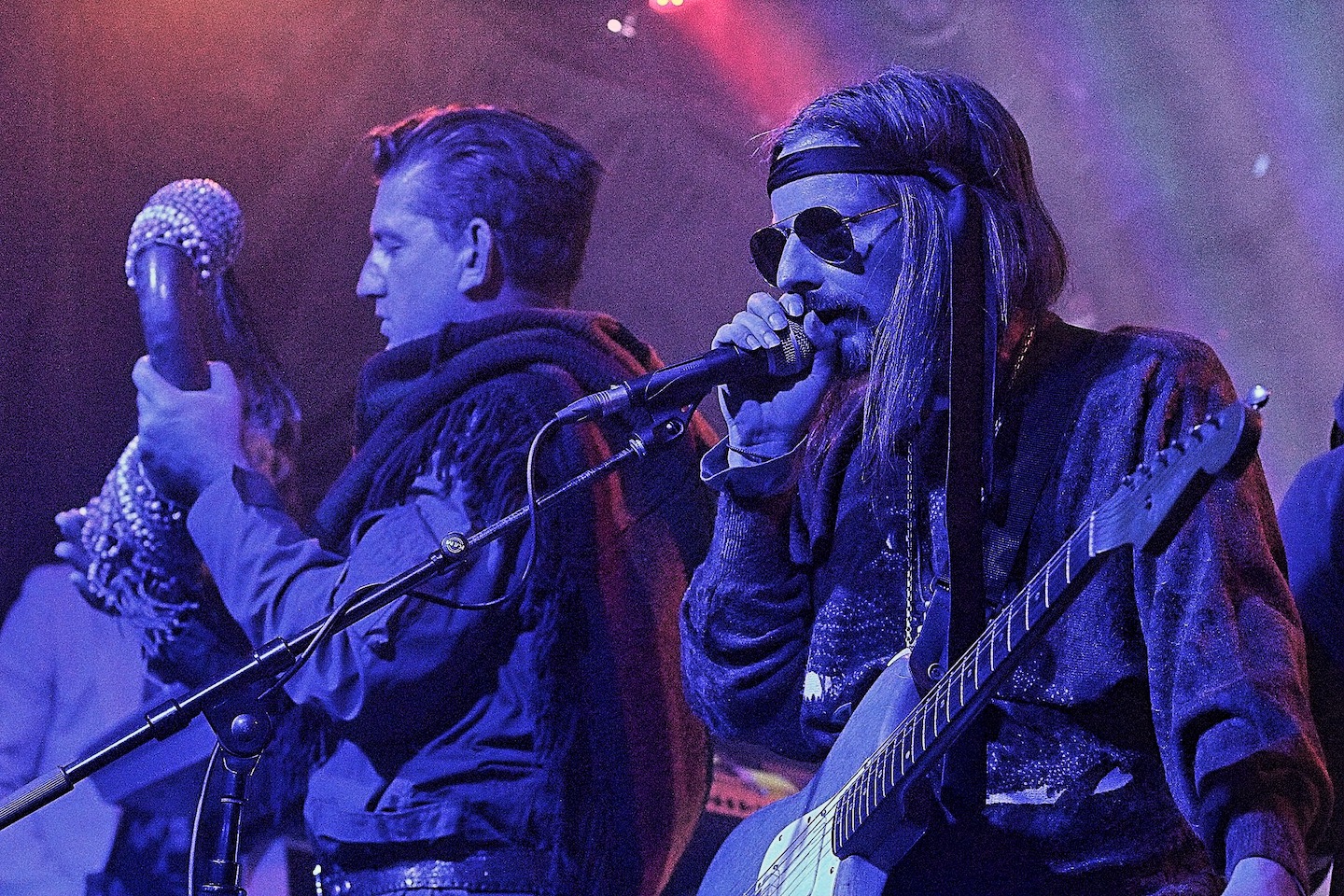 Future Pigeon at the Echo

It’s difficult to explain what brought me there, but the constant eagerness to make sense of the Echo Park scene with all its connections and ramifications, and the will to understand why there still is ‘some kind of taboo or just resignation in talking about Elliott’s death,’ as someone told me, are probably a good start. I never knew it would be such an intricate music scene.

The Silverlake/Echo Park scene has produced a few talents, Beck often comes to mind, but before Beck had won any Grammy, he was one of these local musicians, a good friend of Steve Hanft, who [ made many videos for him, including some for Beck’s best-known songs such as ‘Loser,’ ‘Jack Ass,’ ‘Where it’s At’,…

This is the same Steve Hanft who allegedly introduced Jennifer Chiba to Elliott or vice versa, and the same Hanft who, in 1998, made ‘Strange Parallel,’ an intriguing fiction movie following Elliott Smith and his odd dreams. In 2001, Hanft also directed ‘Southlander,’ who reunited Beck, Beth Orton, and Elliott in a cameo role of a bus driver, while Jennifer Chiba was an ‘Orbgasm player’. I am not making this up. A common denominator to all this was the band Future Pigeon, a dub/reggae revival group with a DIY ethic and a punk/skate esthetic, also good friends with Steve Hanft, and all over the movie ‘Southlander,’ in which they played the dub-pop band Future Pigeon fronted by Rocket, who was played by Beth Orton.

All these people were once again reunited at the Elliott Smith tribute organized at the Music Box on November 4th, 2003, just a few weeks after his death. Steve Hanft closed the show with his short ‘Strange Parallel’, while Beck, Beth Orton, Future Pigeon (among other artists) played a few Elliott Smith covers. I have heard Chiba was in the audience although I didn’t see her. At the time, it was announced that the show would be recorded for a possible tribute record, but the album never saw the light of the day and the reason may have been the authenticity of the beneficiary? The proceeds of the tribute went to ‘The Elliott Smith Foundation for Abused Children’ whereas the foundation was not established yet. One thing is certain, this Echo Park crowd seemed to be very united and preoccupied with Elliott Smith’s legacy, whereas there was no trace of the other Elliott Smith crowd, as people like Jon Brion or Mark Flanagan were nowhere to be seen. I know the Largo crowd was estranged from Elliott when he died, but death and grief often have the power to erase problems.

Future Pigeon, a 9-piece ensemble influenced by reggae and dub, seemed to be the constant link between all these people. Their other version, Wiskey Biscuit (without an h), consisted more or less of the same people, with, this time, a punk country vibe. They toured with Beck and Elliott Smith, and, if you believe the internet, Beck’s gorgeous album ‘Sea Change’ was written after his break-up with long-time girlfriend Leigh Limon when he discovered she was cheating on him with one of the members of Wiskey Biscuit/Future Pigeon. Despite a few digital albums, and the release of The Echodelic Sounds of Future Pigeon in 2006, the band didn’t leave a big mark in the music landscape, but they are undeniably connected to music landmarks.

I saw Future Pigeon play a few times, and with their DIY ethics, laid back humor, and bohemian lifestyle, they looked like a bunch of friends with modest origins and a common love for Rastafarian culture. However, it’s important to nuance this impression after learning a few things: bassist Eddie Ruscha is the son of renown painter Edward Ruscha, associated with the pop art movement and whose work can be found in the most prestigious museums of the country, whereas keyboardist Danny Preston was referred to me as ‘the rich guy,’ with a father who used to own a Beverly Hills office. They all live(d) in the same neighborhood, and Preston apparently still lives on Lemoyne street, a few houses down where Elliott died, whereas frontman and singer Jason Mason was living close by at the time.

This street is definitively rich in music legends as Roger Steffens and his wife Mary also live there, next to Chiba’s ex-bungalow. Steffens is an author, lecturer, editor, reggae archivist, photographer, producer, and he used to be the co-host of the award-winning Reggae Beat on Los Angeles radio KCRW till 1987. He has contributed to countless music anthologies and he is mostly known for his work on Bob Marley, as the matter of fact, his numerous books and contributions made him Marley’s official biographer. There is no doubt that Steffens has been a big influence for a reggae revival in this town, and the best proof is probably the long-running series of evenings called ‘Dub Club’ at the Echoplex, produced by Spaceland and featuring many reggae legends and DJs, often including DJ Roy Corduroy, better known as Jason Mason of Future Pigeon.

This convoluted and intricate series of details show how all these people are connected, world-renown Reggae authority Roger Steffens was probably looking at dub-revival band Future Pigeon with respect and love, while Jennifer Chiba once dated one member of Future Pigeon (according to several people including a close friend) and made a few appearances in Steve Hanft’s movies – Hanft also made a short film about Future Pigeon, where you see her, very briefly, playing some instrument. The Steffens are still living next door to Chiba’s ex house, and I was told by two different people that Mary Steffens, Roger’s wife, had developed a very close relationship with Jennifer Chiba, ‘they were like mother and daughter,’ one person said. If I could add one thing, I would say that Dave Erickson, a close friend of the members of Future Pigeon, was Jennifer Chiba’s lawyer when she decided to sue her other lawyer in a second lawsuit, after losing her first lawsuit against Elliott Smith’s estate.

All this may explain why these people don’t speak and don’t want to talk about what happened to Elliott: They form a very close and united community and their respective stories go way back. I never managed to get anything from Danny Preston or Jason Mason, who recently said to a neighbor I talked to ‘Why do you want to open this can of worms?’ As for the Steffens, I once received this brief answer after sending a carefully worded email: ‘Elliott Smith killed himself and left a suicide note. We have nothing more to say.’ It was the sort of thing to shut down any possible conversation. It was even clearer than the silence from Jason Mason, who still has to explain to me his ‘can of worms.’

Note: The inspiration behind ‘Steve Threw Up’ is NOT Steve Hanft but Steve Moramarco of the band ‘Superbean’