Elliott Smith’s Case: We Still Don’t Know When The Police Arrived At The Scene 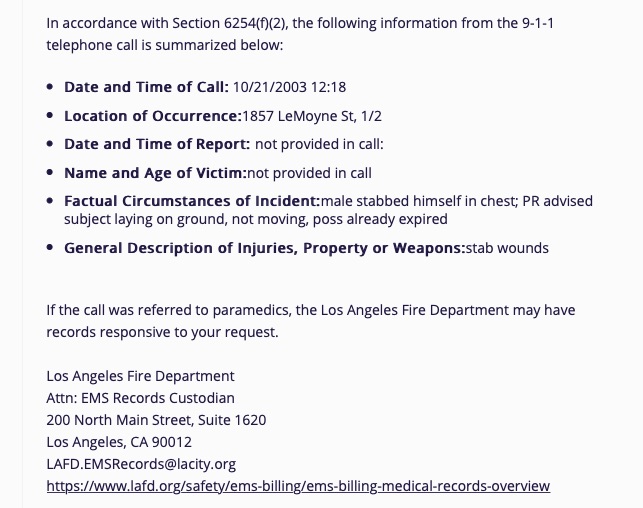 When someone is calling 911,  a police department dispatch center is usually reached, and the dispatcher is asking for the location and the nature of the emergency. If required, the call may be transferred to the nearest Fire/Emergency Medical Services (EMS) dispatch center, while the dispatcher remains on the line and may give potentially life-saving instructions such as how to perform CPR on an unresponsive person.

This is very probably what happened on October 21st when Jennifer Chiba called 911 at 12:18 pm after Elliott Smith was stabbed. An ambulance arrived at 1857 ½ Lemoyne street probably shortly after the call – there is a fire station located on Sunset Blvd, just a few miles away – and the whole episode, including transportation to the hospital, took exactly 52 minutes.

I tried to send a request to publicrecords@lacity.org in order to get more information, but unfortunately, they could only provide very few details:

In accordance with Section 6254(f)(2), the following information from the 9-1-1 telephone call is summarized below:

Date and Time of Report: not provided in call:

Name and Age of Victim: not provided in call

If the call was referred to paramedics, the Los Angeles Fire Department may have records responsive to your request.

Even if the name is not provided (and I wonder why), it is the right incident, and I have tried to reach the Los Angeles Fire Department before, without any success (but may try again). This probably confirms the paramedics were dispatched at the address and not the police, as Chiba told the 911 dispatcher it was a suicide and needed medical help. The police probably came later, and we still don’t know how long later: Chiba’s next-door neighbor doesn’t remember seeing the police when the ambulance was carrying Elliott away, and If he remembers correctly, we can assume the police arrived later in the afternoon. It would be very important to know the exact time of their arrival, as one or 2 hours could give a lot of time to possible alteration to the scene, either voluntary or not. If Jennifer Chiba said to the paramedics it was a suicide, there was no reason for the police to arrive at the scene immediately, then who knows what happened inside this room between the time Elliott was transported to the hospital and the police’s arrival? We know that detective King placed a phone call to the Coroner at 23:55 pm on October 21st, which was more than 10 hours after Elliott’s death – he died at 13:36 pm at the hospital – but it may have simply been normal procedure.