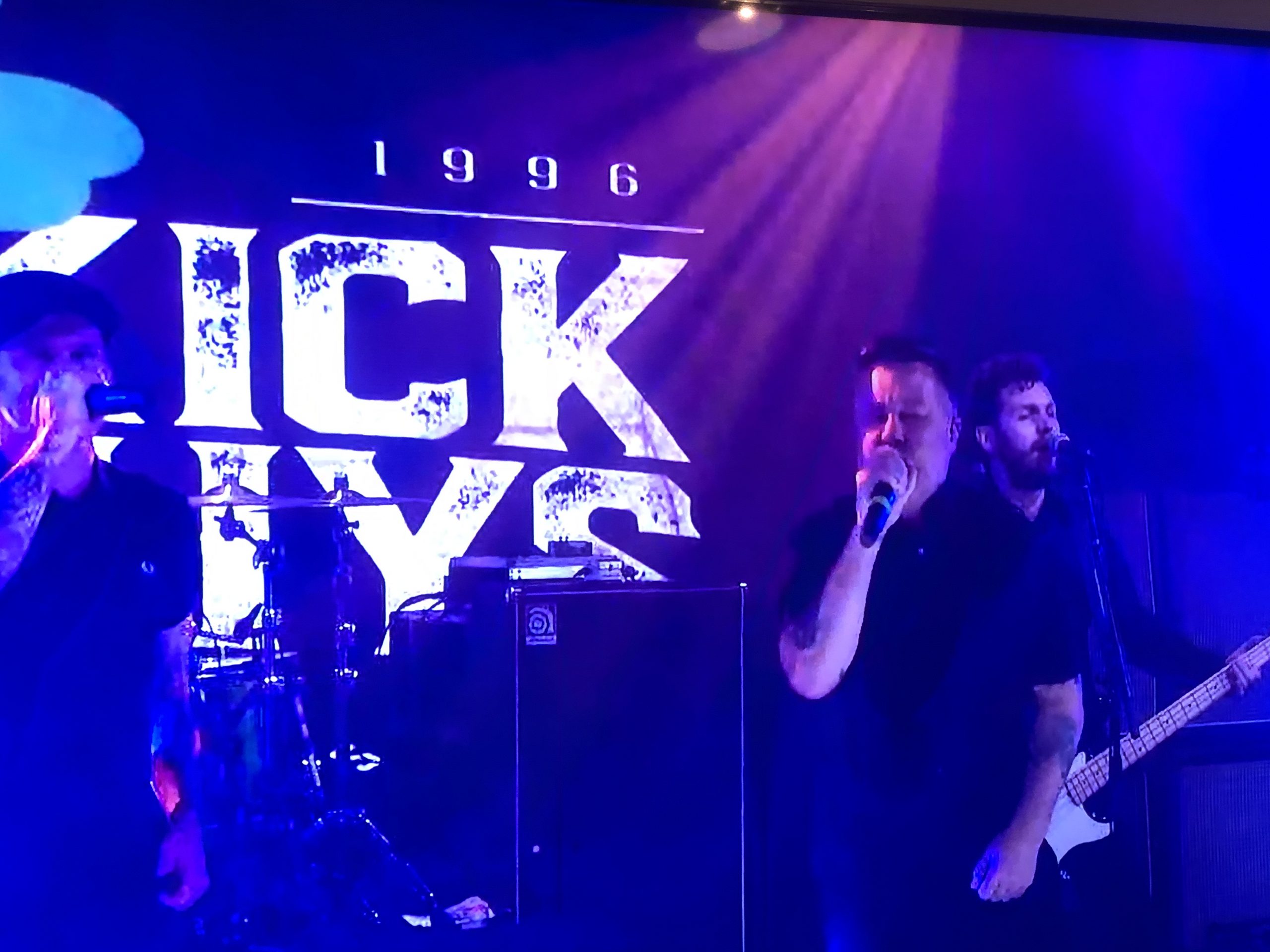 A city, reeling in pain and sorrow, lifted its eyes to favorite sons Dropkick Murphy in hope, in brotherhood, in everything the Punk Hardcore Celtic rockers in arms has always provided, and at a streamed live performance, The Murphs (named after a detox center -hahahaa) didn’t let them down. “We had a good run, he taught us how to have a winning culture here in sports… Shall we support him wherever he goes? Yes, except when he plays against the Patriots”. Tom Brady is shipping down from Boston  in search of another  Superbowl ring (with Tampa Bay? How?) and Ken Casey called Brady a good guy, and his family good guys, and the Murphs -who are really ace fellas I promise, if they say support Brady except when he plays against the Pats, that is what will happen.

Yeah, really good guys. When I saw em at Terminal 5, they reacted to a skinhead Nazi who invaded the space by kicking him in the head and throwing him out, they support Unions, they support the working class and the AFL-CIO. What’s more, they are close friends with a man who was once one of my best friends, the photographer Joe Stevens, and anyway who is alright in Joe’s books is fine with me.

“We are all in this together” Casey claimed before launching into a moving version of “You’ll Never Walk Alone” – first division Liverpool’s theme, though the last time I heard it  Renee Fleming was singing it much better than Casey and Al Barr combined, but Renee was singing on Broadway and the Murphs were singing for their friends in Italy (they played Milan in February),  because, while Brady leaving the Pats is sad, the Celtic wonders missing their first St. Pattys in 24 years was sadder and they went out of their way to make it good.

And they were good, occasional great, but the nearly two hour set wasn’t great. What was wrong was some stuff you’d assume, they really missed a live audience and were left shouting out the stagehands in search of a response (“Can you boo us?”), and the other problem is one that hurt Code Orange last Saturday (here), it isn’t live but it isn’t live on film either, and it isn’t closed circuit TV to bring an audience in the arena closer. Live on film is a bit like a live album, there is nothing to stop the band from twisting and fixing after the fact, and at an Arena you are looking up to the screen then down to the stage, but streaming a live show needs the cameraman not to direct, but to step back and for the most part simply capture the show. This cameraman never stopped chasing the band members around: Tim Brennan is a mesmerizing guitarist, and I get the urge to see him up close, but it disrupts the flow even on a solo. Then they make the exact same mistake Code Orange did, pull back and let’s see the place empty, let’s see what the band is seeing, the brain jump they need to make to play to an empty room would mean more if you could see what they were seeing, it would have been scary and intense and unique. Before the show, Ken said he was nervous because it was easier to play to somebody then to play nobody, that was the opportunity they missed: to illustrate the horror of social distancing. The counter on YouTube hit a 155K viewers height half way through, it was also on Facebook and their website, so maybe 300K viewers? Impressed and it would be more impressive if we could see them not seeing it.

It took forever for the show to kick in properly, a quarter of the way through the set and it was still only okay till a tremendous take on the traditional  “Johnny, I Hardly Knew Ya” set them straight. The two openers, while certainly standard bearers, weren’t show stoppers, and the band had no center, everything was racing everywhere. It was just taking them so much time to nail it, and really what saved the sense of a band, beyond “a loud cheer from the studio audience…”, was two recently released  songs: “The Bonny” and “Smash Shit Up” (loved the recordings as well) was a turnaround and until they mistakenly performed three pretty good new songs slowed it down, they were on fire. The newbies were lead by “Mick Jones Nicked My Pudding”. They don’t mean the Foreigner guy, but… well they also covered on one of the best moments of the entire evening, “I Fought The Law”. The end of the first side of The Clash’s debut album, the Sonny Curtis classic was given a world class treatment as Al and Ken traded verses and the band roared behind them with not their hardcore, but their punk roots in full bloom. The best moment of the evening. Maybe. Except “Going Out In Style” has always been a masterwork, a wake sung by the man who is planning on dying, along with “The Bonny” -a cover of their friend Gerry Cinnamon’s neo-classic Irish folk transformed to, well you know, a rip it up Celtic rocker (let’s hope the DM/Rancid gig where Gerry is opening actually happens but in May? A tough one…), and “Sunday Hardcore Matinee” -which is even better than you thought it was.

More, or at least as much as possibly more, the greatest thing was that in a nearly empty room the band still managed to maintain its community, reading questions, plenty of shout outs and just really, really good vibes.

So admit it, it wasn’t the best show Dropkick Murphys have ever performed, it isn’t even the best Dropkick Murphy show I’ve ever seen. But it was a good show from a great band and I enjoyed it.