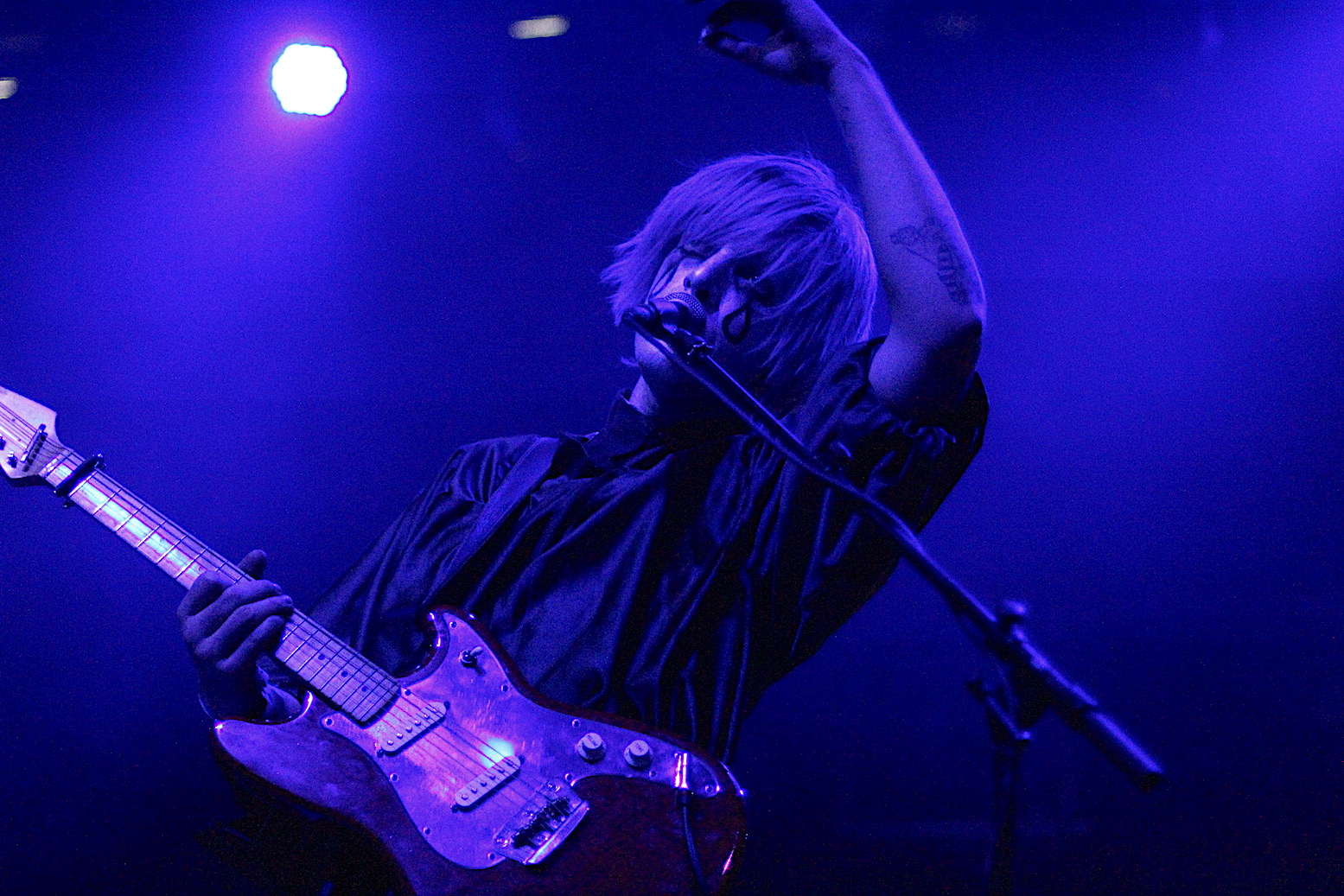 On a day when Nick Cave has once again expressed sharp criticism of cancel culture in one of his Red Hand Files, another band almost got canceled after tweeting two jokes that were not supposed to be considered too seriously, because they were just jokes? Drab Majesty, a LA darkwave-synth band fronted by Andrew Clinco, had to apologize several times over tweets regarded as ‘racist’ by our very politically correct culture.

The first tweet was about experimental sound and noise-maker Boyd Rice who is using the name of NON, and the second one was about Chinese people’s habit to eat dog. The two tweets have now been deleted by their author, but of course, they were saved in the Twitter-sphere beforehand: 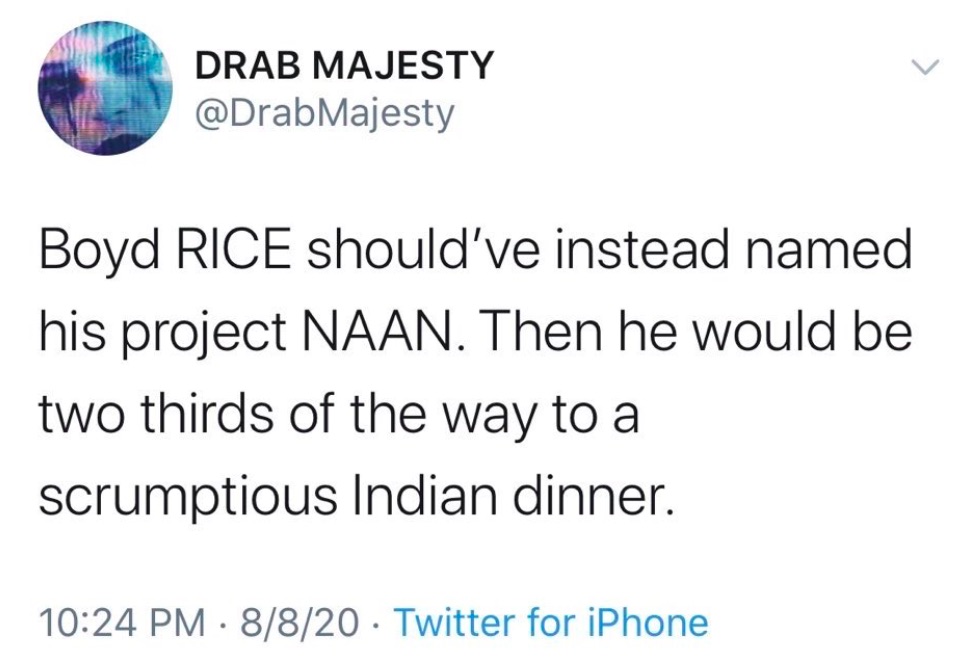 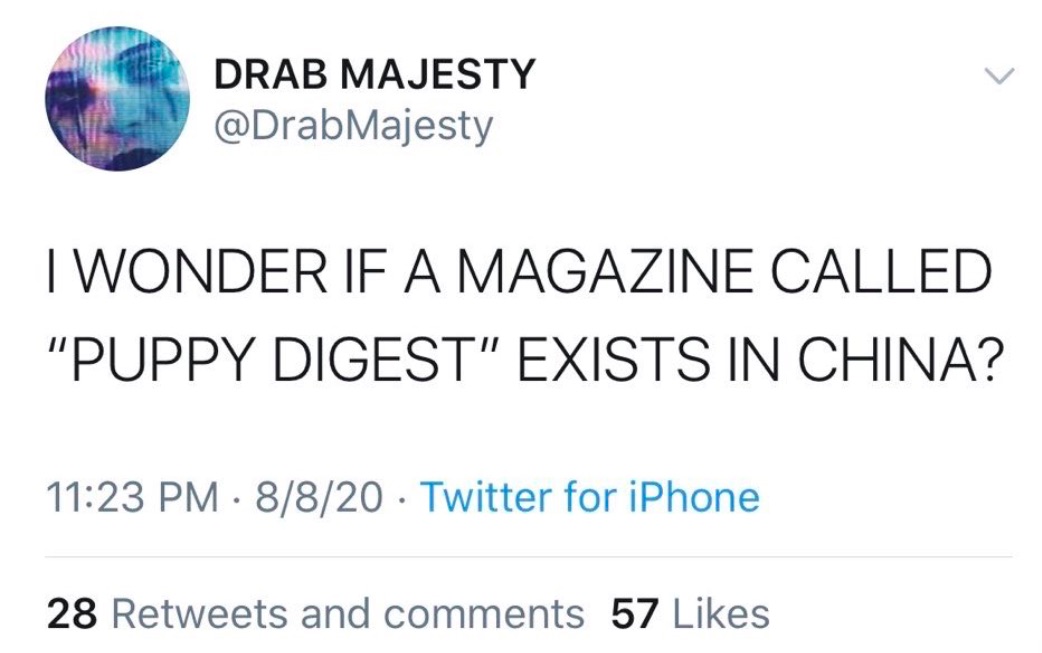 Clinco not only deleted the tweets but apologized, twice, probably because the first apology was not judged sincere enough, and his first attempt was the following:

‘Hey I appreciate your response I now know that the edge is very slippery and Cliff is very steep now that Twitter is not a free speech platform and that rationality and sensible scrutiny doesn’t exist here. it is not a place for me. I am deeply sorry about the tweet and totally understand its racial implications but never thought that commenting about an actual current event such as the Yulin Dog festival would generate so much hatred toward me it.’

But since cancel culture requires a certain vocabulary that was not present, he had to try again.

‘I have been listening, reading, and thinking about the horrible tweet that I made, and I wanted to further my apology.

The tweet was myopic, unsympathetic, steeped in culture prejudice, and it represented myself as both a racist and a bigot. I see now that it emanated from a position of white privilege, something that I promise to recognize moving forward.

It was a careless and selfish attempt at humor without considering my audience and the current state of the world, and I see how this tweet contributes to a frightening climate of increasing harassment against Asians and people of color, making a space for discourse less safe.

I am closely reading, listening to, and learning from every comment and will continue to do so. I deeply appreciate those who have already reached out to me in an attempt to help me better understand the severity of my tweet. I’m learning of the long history of microaggressions Asian Americans have faced, and I’m so deeply and truly sorry to have contributed to any capacity to that dark and undeserved narrative.

In addition, I’ve made a donation of $1000 to the AAJC (Asian Americans Advancing Justice) whose mission is to advance civil and human rights for Asian Americans and to build a fair and equitable society for all. I’ve done some research, and this one resonated with me because of how diverse their mission is. Their programs aim to increase visibility of Asian Americans as part of the fabric of America, preserve the considerations of race as a factor in education admissions, and eliminate racial barriers in voting to name a few.

Lastly, this experience has made me rethink my own appropriation of cultural imagery. As a result, I will be giving much more diligent attention and thought to the future aesthetics of this project.

I am truly sorry for what I’ve said. Moving forward I will work on correcting my biases in thought and in action. I promise to never alienate anyone ever again.’

Can you imagine writing such a mea culpa after the tweets above? Can you imagine using the required terminology such as ‘racist and a bigot,’ and of course ‘a position of white privilege,’ without forgetting the necessary donation to a cause for 2 jokes?. What would this guy have said and done if he had really acted like a ‘racist’?

I don’t want to live in a society that triggers that kind of insanity for something that was not racist. If he played with food stereotypes for the Indian joke, he called it ‘a scrumptious Indian dinner,’ so it was not at all disrespectful. Of course, the Chinese joke was the one which put him in trouble because he dared to draw a ‘Morrissey,’ although he was far from being as offensive as the Moz! His joke was not condemning Chinese culture for eating dogs.

How was this racist I asked to the millennial crowd? I was told he used a ‘racial stereotype.’ Obviously, but doesn’t humor constantly play with stereotypes? Then I would add it’s not a ‘racial joke,’ a cultural joke would be a more appropriate denomination because a lot of other countries besides China eat dogs, unfortunately. Then, you have to look at the subject of the mockery, it is a very reprehensible cultural habit to say the least! The Yulin Dog Festival, that he is mentioning in his first apology, is a horror show where not only dogs are eaten but killed in very inhumane ways after being transported in cramped cages. And if the American meat industry doesn’t treat pigs and cows any better, this is the main reason why I have been vegetarian for several decades, and why a growing number of Americans are realizing this. Any mistreatment of animals should be denounced and criticized.

But I would add that dogs have a very special place in our history, they have been man’s companion since the beginning of times, as the first undisputed domestic dog is about 14,000 years old. And if cultures vary, it’s not racist to criticize a culture doing the wrong thing, it’s not racist to denounce a culture inflicting unnecessary suffering to our most loyal companion. More people should speak up against this horrible festival, it’s not even an example of a culture’s moral superiority over another one, I bet there are a lot of Chinese people, right now, who also want this to stop too.

As Nick Cave wrote it, cancel culture ‘has become quite literally, bad religion run amuck,’ I would even say it is now a cult with strict rules. Say anything about another culture and you are automatically labeled ‘racist,’ say anything about a woman, and you are automatically labeled misogynist, even when there is a genuine concern for something horrific happening,.. like abusing and sadistically slaughtering dogs?

If cancel culture had originally good intentions it now protects the worse and often legitimate horror. Many cultures have bad aspects, we still need to preserve the right to criticize and mock them without being canceled. Drab Majesty’s Andrew Clinco should have stopped at his first apology, that was more than enough.