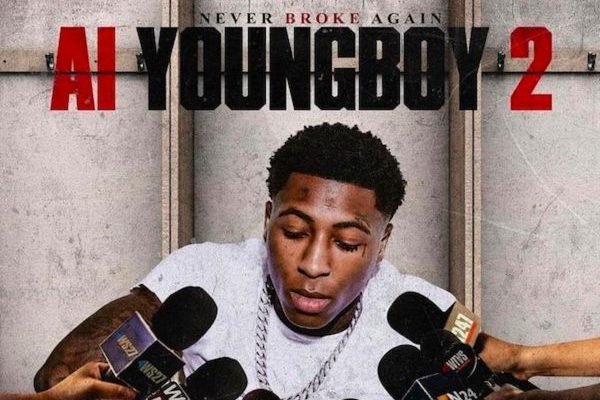 Louisiana rapper YoungBoy Never Broke Again is currently at the top of the Billboard 200. He is pretty good rap guy, and pretty good. His dad was imprisoned for 55 years, he moved in with his Grandma, dropped out of school, got sent to juvenile for six months at the age of sixteen, came out, his Grandma died, he moved in with another rapper and they maintained their criminal activities to pay for their rap recordings. YBNBA released rap mixtapes and caught on, stories of the gangsta life. And now, at the age of twenty, he got it right. With any luck, he will never be broke again.

How good is he? He is pretty good, he is a good rapper and the sounds are autotuned plus pro-tool arranged around smart beats. What he doesn’t have is great songs. And that is why people think pop in the 21st century sucks: what you and I might consider next level songwriting, folks like Smokey Robinson or Holland-Dozier-Holland, don’t exist. The songs as sounds are remarkable and ear catching,. they are a form of background sounds, original and thrilling without being memorable. Because there are no tunes. Apparently, beats and hooks are considered enough for pop.

Within limitations, I tend to agree, they are enough. I would rather listen to Young Thug than, say, Elbow. But if modern pop guys worked harder on the songs they would make more music that lasts. I’m a hip hop head, I listen to rap all the time, but I have problems remembering it. I love the sound, the unsteady wooz of beats and voices, without finding em memorable. There isn’t enough to hold on to, to bring you back to em., to hum along to if you prefer.

It is a seachange in pop and it affects everything. A great songwriter, say Taylor Swift, arranges and produces her music so much it fades. One reason Kanye West is the primary songwriter of the 21st Century is that he can throw anything at a track and it remains Kanye West; he never, ever gets sucked into the endless whirl of Max Martin and cohorts, tricking out songs that might not need it.

Even so, at least it sounds good, it least it is exciting, at least it isn’t tinkling synth songs from the 1980s or bad grunge from the 1990s: it is its own thing.  Finally, just as Joe Strummer promised, it is wide open, everyone’s a star. All you need is some beats and a recorder, you don’t even have to play an instrument. What’s not to like?