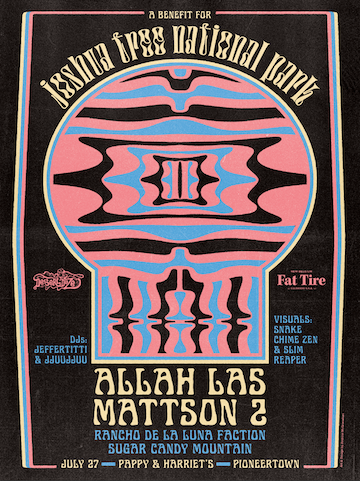 Desert Daze and Fat Tire are teaming up for a very special show benefiting Friends of Joshua Tree (www.friendsofjosh.org), a local non profit dedicated to cleaning and restoring the park after the recent government shutdown. Taking place on Saturday, July 27 at Pappy & Harriet’s in Pioneertown, CA, A Benefit for Joshua Tree National Parkwill feature performances on two stages from Allah-Las, Mattson 2, Rancho De La Luna Faction featuring Dave Catching and other desert all-stars and Sugar Candy Mountain. Jeffertitti and JJUUJJUU will also DJ and there will be visuals by Snake Chime Zen and Slim Reaper. Tickets will be available on Friday, June 21 at 10am PT via http://bit.ly/DDJtreeBenefit.

Desert Daze will donate all ticket proceeds from the concert and the event’s ticketing partner, Eventbrite, will also waive their service fees for this special event. Plus $1 for every pint of Fat Tire sold at Pappy’s over the course of June and July will be donated as part of their Pints for PublicLands campaign.