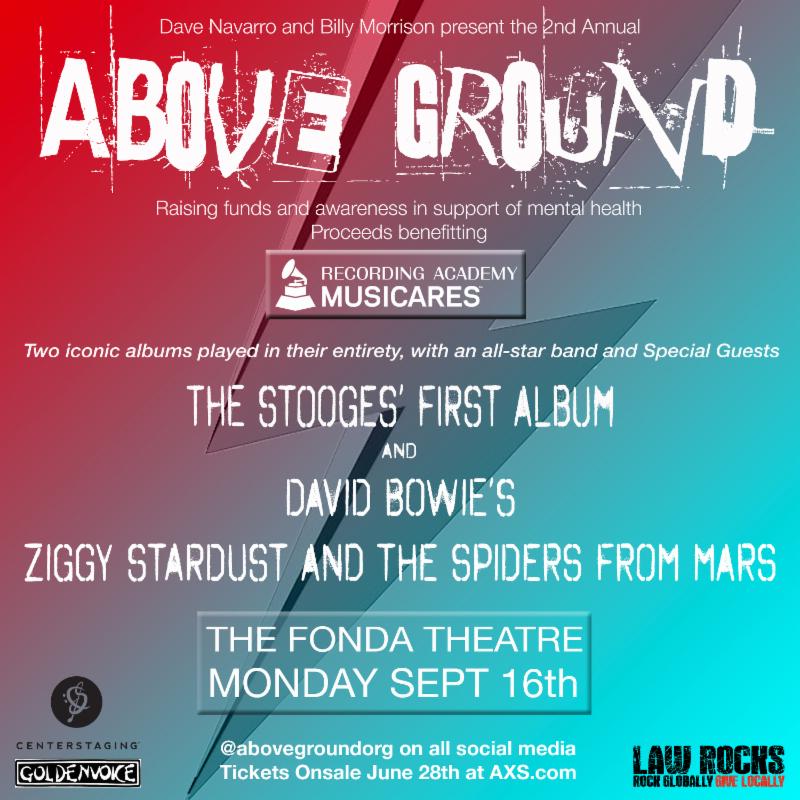 TO JOIN FORCES WITH THEIR MUSICIAN FRIENDS FOR THE

THE VINYL ALBUM AS AN ART FORM

WHILE ALSO RAISING AWARENESS AND FUNDS

FOR THE TREATMENT OF MENTAL HEALTH

Guitarists Dave Navarro (Jane’s Addiction) and Billy Morrison (Billy Idol) have announced the second annual “ABOVE GROUND” benefit concert on Monday, September 16 at The Fonda Theatre in Hollywood. As with last year’s successful event, this immersive evening of art and music will celebrate the vinyl album as an art form, and at the same time raise awareness and funds for the treatment of mental health, with the profits being donated to MusiCares®, a charity of the Recording Academy™. View a trailer for the event here and read an interview with Navarro and Morrison below.

This year Navarro and Morrison–and an array of special guests to be announced in the coming weeks–will tip their hats to two of the greatest albums of all time: David Bowie’s The Rise and Fall of Ziggy Stardust and the Spiders from Mars and the Stooges’ self-titled debut album, on which the world was introduced to Iggy Pop. There will be unique stage sets and production for each album’s performance.

Tickets for the event are on sale via http://axs.com/events/372475/above-ground-tickets.

“ABOVE GROUND” is being produced with assistance from Law Rocks, which promotes music education programs.

During the intermission between performances, there will be speeches from people in the mental health field along with art items for auction, live graffiti from prominent street artists and information booths. 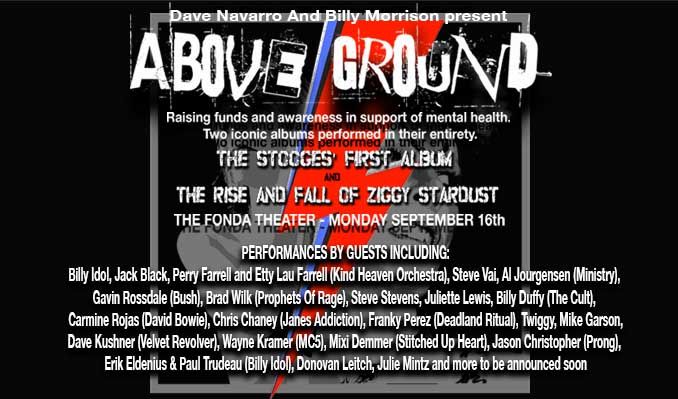 Last year’s inaugural Above Ground event was both a success musically and as a fundraiser for MusicCares, raising awareness and funds for the treatment of mental health. From your perspective, can you talk about how your goals were achieved that night?

BILLY: I think Dave and I really did manage to get people talking about mental health and raised some valid discussion with people during the press we did for that show.

DAVE: I believe our goals were achieved beyond what we had hoped. In addition to raising awareness about mental health issues, we raised a substantial amount of money that went directly to those who need it most. Personally, many people have approached me since to thank me for our efforts to help end the stigma of mental health issues. I have spoken openly about my own and I think it comforts some to know they are not alone. Put it this way, we are working toward ending a need for our own event in a way!

This year’s event continues your celebration of vinyl albums as an art form. How did The Rise and Fall of Ziggy Stardust and the Spiders from Mars and the self-titled debut album by the Stooges shape you musically?

BILLY: Oh, the Ziggy album was everything to me. A sexually ambiguous alien in a woman dress singing about space? What is there NOT to like about that?? Mick Ronson formed my whole playing–listening to his Les Paul when I was a kid was almost a spiritual experience. And the Stooges just personified raw power and emotion–the things that spoke to me the most when punk was happening.

DAVE: Both of these iconic albums helped shape the sound of Jane’s Addiction and were instrumental in terms of influences. As a young man I had been drawn to theatrical performances, Kiss and Elton John among them. When I got to Ziggy, it was as if I had found the perfect blend of theater, story and depth with a musical originality. As for Iggy, let’s just say that our punk rock roots were firmly in place when this album came out, pushing the boundaries of aggression and art and poetry, something that I see in Perry Farrell as well. It’s no wonder Iggy is one of his all-time favorites as well.

Why do you think both these albums continue to resonate with music audiences today? Why are they so pivotal?

DAVE: I think they resonate because they are authentic. Authenticity lasts, lingers and influences. Both albums are crafted bodies of work. Track listing made a difference, what song started what side made a difference. These full-length albums to me are like fine art. Painstakingly created to stand the test of time. And they do!

Each of these albums is important on its own, but pairing them together, in one night, makes quite a statement. What inspired you to present both albums in one night?

BILLY: The Iggy and Ziggy thing has always worked. Even when they both did shows together back in the late 70’s/early eighties, the pairing of Iggy Pop and David Bowie worked. Bowie produced Iggy and they had this ongoing musical relationship that just seemed perfect and iconic to us.

DAVE: I think it’s no surprise that both Billy and I are heavily influenced by the Sacred Triangle of Rock and Roll: Bowie, Reed, Pop. Last year we did Velvet Underground as one of our choices, so it seems only fair that we complete the triangle!

As with last year’s event, the evening will be marked by an array of special guests TBA making appearances. Can you reflect about some of the special highlights from last year’s performance?

BILLY: Having Billy Idol perform The Velvet Underground’s “Heroin” is something that sent shivers down my spine. He nailed it and it was a totally unexpected moment. Also, having Marco Pirroni fly over from the UK to perform Adam And The Ants songs with us for the first time in many years was a definite highlight for both Dave and I.

One of my favorite moments was Macy Gray doing “Sunday Morning” by Velvet Underground. I recall being nervous about that one as Nico’s voice was so iconic… Who could pull it off? Luckily Macy joined us. Now, at rehearsals, Macy tends to just listen, learn, take in and get through so she knows what’s she’s doing. But we don’t know her process! SO…she had gotten through it a few times at rehearsal with us and we all felt it sounded decent. However, when Macy gets on stage, she completely changes and blossoms into the amazing singer and talent we have come to know and love. When she started singing live, I literally had shivers as she made it so special and her own. I was blown away.

Finally, and importantly, mental health is more than ever the big issue of the day, with devastating suicide rates on the rise. Can you talk about the important role that the music world can play as a consciousness-raiser?

BILLY: We all work in a business that gives us a platform. And it’s our duty to utilize that platform for good whenever we can. So the music world has so much influence and real power that so many people don’t use – Dave and I are just trying to use whatever platform we have to help make a small change and I encourage everyone to do the same. Together we can make a difference.

DAVE: I think one of the reasons music is such a great tool is that it can get at a feeling inside us that is uniquely our own, yet we can share it. Much like those who suffer from mental health issues, they are all uniquely personal but can be shared for a much broader conversation. I am proud to stand as a survivor of trauma and depression and drug addiction. I feel that anyone who chooses to keep pushing forward through the tough time and asks for help should be proud they have done so. We are warriors who choose to not let this disease kill us, yet we have trauma all throughout the body physically, which can be harnessed into addiction and self-destructive behavior. I am here to say, stand up and be proud that you choose life, no matter what it takes to stay in the game…you are NOT alone. Here are a handful of musicians who understand YOU and want to help YOU because WE GET IT. We understand you and consider you part of our family on the road to recovery.

A friend and ally of the music community, MusiCares® was established by the Recording Academy™ to safeguard the health and well-being of all music people. A four-star charity and safety net in times of need, MusiCares offers confidential preventative, recovery, and emergency programs to address financial, medical, and personal health issues. Through the generosity of our donors and volunteer professionals, our dedicated team works across the country to ensure the music community has the resources and support it needs. For more information, visit www.musicares.org, “like” MusiCares on Facebook, and follow @MusiCares on Twitter and Instagram.

Law Rocks’ mission is to promote music education for underprivileged youth and raise funds for local nonprofit organizations by combining the power of music and the generosity of the global legal community. Law Rocks accomplishes this mission through epic battle of the band fundraising concerts in cities across the globe that star legal professionals-turned-rockstars. Since its 2009 founding, Law Rocks has toured to 21 cities around the world, held more than 100 concerts, and raised 3.2 million dollars. For more information, visit https://lawrocks.org/ and follow Law Rocks on Instagram