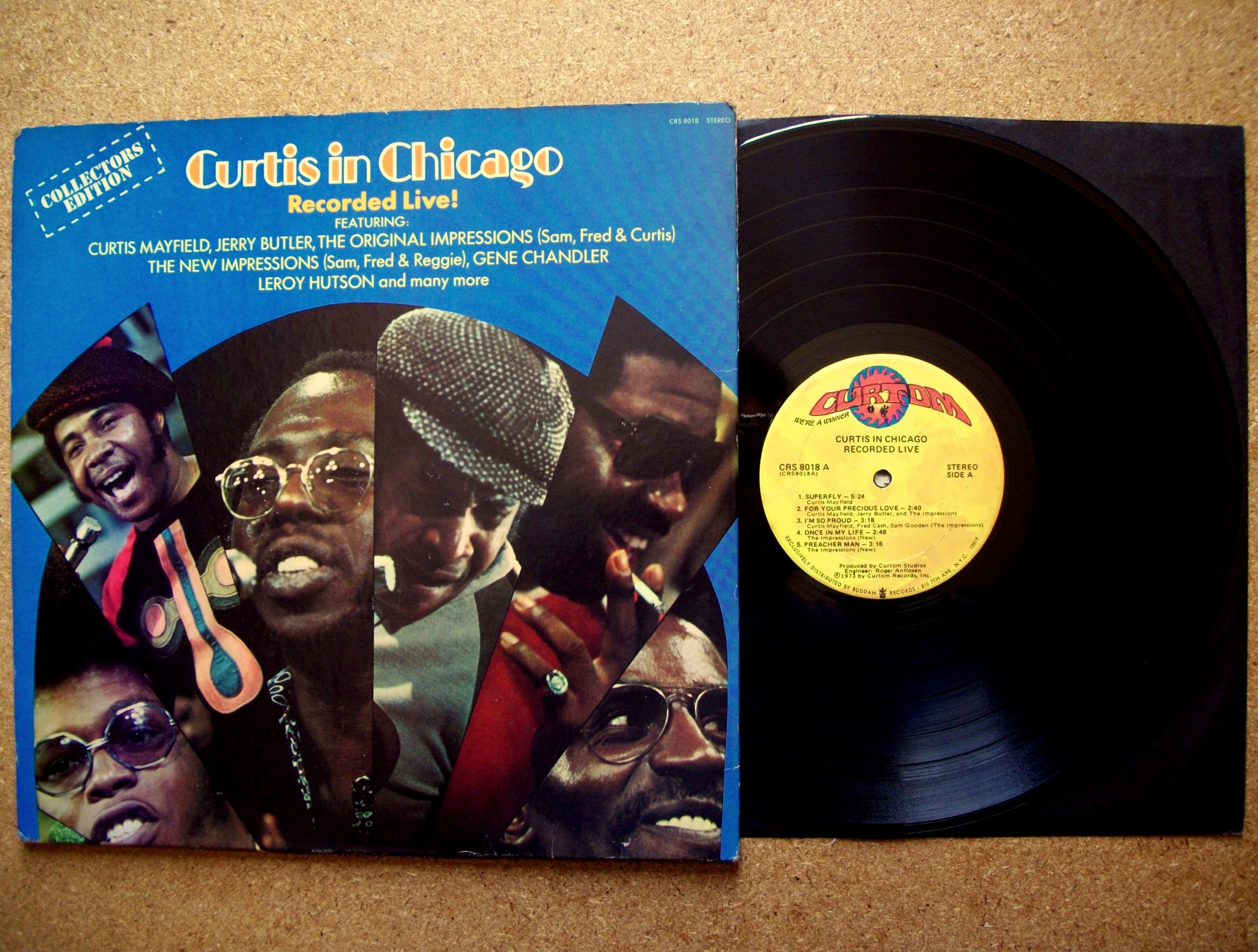 Curtis In Chicago  is not just the second solo album in two years, but the lesser of the two. An unremarkable homecoming, and a stop gap for no good reason. 1971’s Curtis/Live was given the A+ treatment from us (here), the double album was a drawing in of breath (only his second solo album) and a regrouping at the Bitter End. In 1973, Curtis In Chicago Recorded Live! is an Impressions and friends reunited for PBS (recorded and shown on Chicago’s PBS second city flagship WTTW,) including the original Impressions, (Jerry Butler, Fred Cash, Sam Gooden, Mayfield and Reggie Torian), the newest Impression Leroy Hutson, and the great Gene Chandler, but it is a TV special and it shows. It  is too perfunctory to be useful, too polite to wrong the Impressions history, and they gave us Fred on “I’m So Proud,” Jerry on “For Your Precious Love,” and Gene’s classic “Duke Of Earl,” but failed to give us “People Get Ready”. In other words, on Cuurtis label, and with Curtis name in the title, it isn’t a Curtis album.

Cut live at Chicago public television station WTTW, 1973’s “Curtis In Chicago Recorded Live!” was billed as a Mayfield solo album, but in reality  should have been marketed as an Impressions family reunion. In addition to the original Impressions line-up (Jerry Butler, Fred Cash, Sam Gooden, Mayfield and Reggie Torian), the album gave a nod to the post-Mayfield Impressions line up in the form of Leroy Hutson (who was given a solo shot on ‘Love Oh Love’). Musically the album also showcased a mixture of Mayfield solo efforts, Impressions numbers and a couple of solo spots for Butler, Gene Chandler and Hutson, and Johnny Pate ‘s arrangement of “Amen” to close out the night.

This is warm hearted but irrelevant, even then, even in Mayfield’s own backyard, and with a history to enlarge upon, a great history, it sputters by ignoring the weight. . The “Superfly” that opens the album is slimmed down to under four minutes, the exact opposite of what should be done, and that is probably the highlight of the evening. It is an ill fit tribute from his home time to their breakout star once and for all. But it isn’t where Curtis was out, and it fails to connect as album, as a sight of Curtis in tandem through his career.

No doubt, Curtis In Chicago smells like a potential blockbuster, but it at 33 minutes in length it is over before you’ve started to dig in properly, it needed to be three times the length to signify in any real gap. Instead it is neither nor, a step back for no reason, not big enough for either Curtis or the Impressions, it survives as an interesting historic artifact and not much more, enough said album # 6 -except it only got to #135 in the pop charts. .