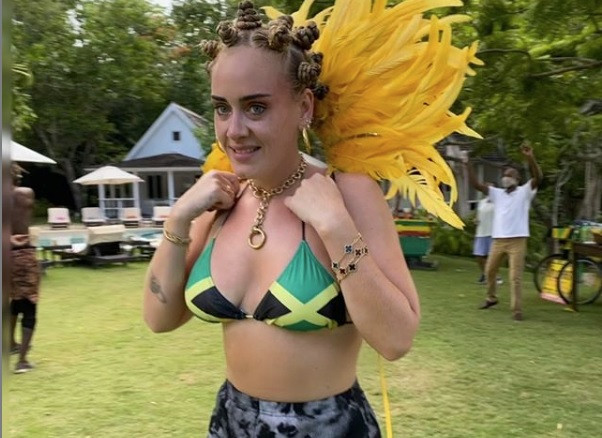 Two days ago, Adele was in the news, just after posting a photo of her in a sexy bikini on her Instagram. I thought everyone was commenting on her killer new body, but if most people were admiring her dramatic weight loss, she was trending for another reason: cultural appropriation. Adele was wearing a string bikini decorated with the Jamaican flag and had her hair in Bantu knots with the caption ‘Happy what would be Notting Hill Carnival my beloved London.’

Twitter went crazy, or should I say a certain category of people on Twitter, the usual social justice warriors, mostly Americans this time, as they accused her of cultural appropriation:

‘If 2020 couldn’t get any more bizarre, Adele is giving us Bantu knots and cultural appropriation that nobody asked for. This officially marks all of the top white women in pop as problematic. Hate to see it,’ tweeted American journalist Ernest Owens, among other ones.

Fortunately, plenty of Africans and English people took her defense, including David Lammy, the Labour MP for Tottenham. and I am sorry to say, this stupid incident made America look even more problematic than I first thought if it is even possible.

‘Americans generally are the most ignorant people the planet. 80 % them never travel outside the US. They know nothing about other cultures, still they want to spread their useless and dividing identity politics to the world. They should be ignored,’ replied @kimmystyle

‘It’s sickening tbh. They try to forcefeed the entire world with their brand of racism and hate. They feel like they have the right to dictate what the rest of the world should do. Pathetic,’ added @_esosa

‘Americans confuse me because if she’s at a Jamaican event, wearing the Jamaican flag and only doing it for that specific situation because she’s in an environment that’s embracing the culture then how exactly is it appropriation ?’ added @albertenechi

‘It’s not offensive. He’s an sh#t journalist trying to continue the trend of racial division and hatred currently circulating the US and being exported. He and his type are an absolute disgrace! The UK is not the US; we are unified here, so he needs to leave Adele alone!’ added @sipocharles18

‘I’m Bantu. And we really, really, REALLY, do NOT give a F. What annoys us more, is African Americans who constantly stake claim on a culture they know NOTHING about. @Adele I actually live on the continent whose style you are being accused of misappropriating. Do your thing,’ replied @MissCiku

‘I am from the Yoruba tribe in Western Nigeria in Africa and she looks beautiful. African Americans must stop being the police for African ‘cultural appropriation’ on behalf of a continent they desire to know little about,’ wrote @femiadebimpe…’ @Adele We Nigerians are part owner of this cultural hairstyle and many more. We approve of your use of it. Will like to engage you on more you can try out, we have Didi, and many other styles too. Wrote @Opeyem1prime

I could go on forever and could also comment on the stereotypes about Americans. But I agree, this outrage over Adele’s hairdo was completely stupid, and unnecessary. She was celebrating the Notting Hill Carnival, an annual event that celebrates Black British culture in London, and during which people from all backgrounds dress up as she did. Adele grew up in the multicultural Tottenham London, which has one of the largest and most significant populations of Afro-Caribbean people, so it looks like she was embracing a culture she was very familiar with. Her intentions were good, and the fact all the tweets from Africans and Afro-Caribbean people were completely supportive is very telling. It was a complete lack of understanding of how tightly Jamaican and British culture are intertwined in that part of London.

If Ernest Owens is black, a lot of white Americans shared their outrage on Twitter, and it’s difficult to qualify the madness of some of these so-called supporters of Black Lives Matter (some black but mostly white) commenting on the photo as if this was helping!

‘White people have NO RIGHT to culturally appropriate black hairstyles. Clearly defined racial boundaries MUST be policed. (Unlike gender, which is totally fluid.),’ wrote @TitaniaMcGrath

‘This doesn’t go far enough IMO. As a white woman performing soul music, Adele’s career is based on cultural appropriation. White people should only be allowed to sing country or classical music and if you elect me as your president I will enact this into law,’ @Halalcoholism

‘Absolutely disgusted with Adele here.This is literally modern colonization. White people will not allow POC to have anything!! Cultural appropriation is cultural genocide. @ShaneHarmer1

The world has definitively gone mad, and there are apparently no limits to the woke millennial culture’s outrage. And who else but Phoebe Bridgers could pose for the poster child of this millennial wokeness? In a tweet now deleted (people have taken a screenshot), she tweeted:

‘When your entire brand is that you’re a white woman who ‘sounds Black’ this shouldn’t be a surprise to anyone.’

Not one Jamaican was offended by Adele’s hairdo, but very white Bridgers thinks she is entitled to be offended on behalf of Black people? And when I say very white, she is, she only posted photos of Black people on her Instagram account when the Black Lives Matter protests were raging here in LA. She once again sounds arrogant, especially because this tweet was followed by an ‘I’m right’ while everything was deleted a bit later. With her still precarious indie darling status she sounds self-important enough to give a woke lesson to one of the most successful pop singers in the world while showing at the same time her ignorance, i.e. Adele’s story and connection with Jamaican culture. As for Adele sounding Black? Where did she get that? I would say Phoebe Bridgers is asking for attention, she has attacked a series of musician lately from Eric Clapton to Marron 5… why?

So why are we there? Why is wokeness so insane and so full of itself? I bet Adele couldn’t care less. 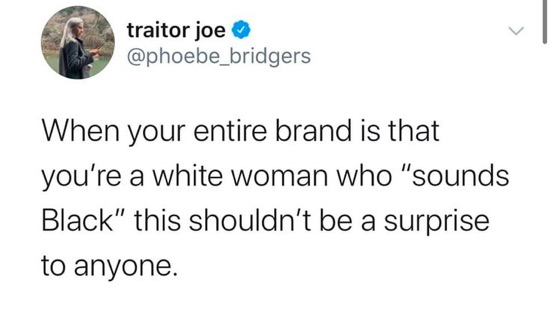