Cruel to Be Kind: The Life and Music of Nick Lowe by Will Birch Reviewed 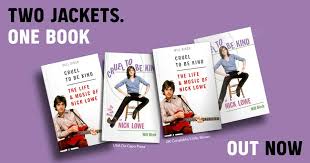 If you were a boy in the early 1960s, reading about the great pop song writer, producer, etc, Nick Lowe’s early years is a form of Boys Own Adventure: a daydream of youth with his RAF father in Jordan, friending with King Hussein, after the years as a fighter pilot in the second world war. rock nyc writer (and member of the armed forces himself) Steve Crawford considered the early years portions of Will Birch’s “Cruel to Be Kind: The Life and Music of Nick Lowe” overkill at best, page after page of a life that was like being  thrown down in the middle of a Biggles adventure (James Bigglesworth, nicknamed “Biggles”, is a fictional pilot and adventurer, the title character and hero of the Biggles series of adventure books, written for young readers by W. E. Johns (1893–1968) – FYI). Nick’s father was Group Captain Geoffrey Drain Lowe, CBE -he fought the Battle Of Britain. His early years with his loved and respected father and also, the real influence on Nick’s life, his mother, were a magical story that ended up, as these stories tend to, in an English boarding school where Nick was truly the Jesus of the cool, obsessed with girls and music and not in that order entirely. Like a million rock musicians before him, they fed off each other.

Lowe and schoolmate Brinsley Schwarz ended up forming a band and leading pub rock out of the pubs as Nick went down a rabbit whole of hallucinogens that almost destroyed his mind. When he was out the other side Brinsley Schwarz, the band, at the hands of Dave Robinson and Jake Riviera management (aka Stiff Records) flew the UK music press to New York for a disastrous performance at the Fillmore East.

Eventually, Nick lost interest in the band and became the house producer for Stiff Records, including Graham Parker’s debut Howlin’ Wind, the first punk rock album by The Damned, and Elvis Costello’s first five albums. At the same time he joined forces with  Dave Edmunds and formed Rockpile, as they performed on each other’s albums (Jesus Of Cool, Repeat When Necessary -to name two) which Dave disentangled himself from Led Zep owned label Swan Songs. Nick’s biggest solo hit, “Cruel To Be Kind” was on his sophomore release Labour Of Lust. Along with Elvis Costello’s cover of “(What’s So Funny ‘Bout) Peace, Love And Understanding” it would give him a lifelong career. But his solo work was less successful and easily the worst period in his career followed, from 1982 till the end of the 1980s the material simply wasn’t there (except, man, “The Rose Of England”) .

In 1990 he released Party Of One, beginning Act Two of Lowe’s career: a successful attempt to reboot himself as an Americana King of understatement. From 1990 to last years two, excellent ,EPs, eight songs isn all and all great with his backing band Los StraightJackets, the man has been impeccable.

Will Birch, the former drummer with a New Wave band well worth checking out, The Records, does a fine job of tackling the business side, the career of, Nick Lowe. He never loses you as you go from album to album and decade to decade. And he gets something that writers who weren’t English, or certainly not from that period of England, might have missed: Lowe was the personification of a certain English hero, like his father before him, Lowe personified absolute cool in the face of chaos; a charmer who could have been anything, just a superhero type character. The problem is, the more you know about Nick (I have a friend who was on Radar Records in the early 1980s, Jake’s label, who claims Nick was completely out of control), the less revealing the book becomes: Birch did a bit of a whitewash on the artist. It is as if Birch lifts the curtain a little, discussing Nick’s marriage to Carlene Carter, and his relationship with her step-father Johnny Cash, the long road to Cash recording “The Beast In Me”, and also keeps a lot out of sight: there is something not being said and he feels that way all the way through it.

Personally, I am a very big fan of Lowe and I still learnt a lot  (the entire Brinsley in New York City now makes sense). Birch has a gentleness to his prose and the story is told with respect and a certain clear pleasure in Lowe himself. It seems like Will, like me, suffers from hero worship when it comes to the beast in him, like he is James Bigglesworth if not Drain Lowe, with an electric guitar and an ear for a hook.