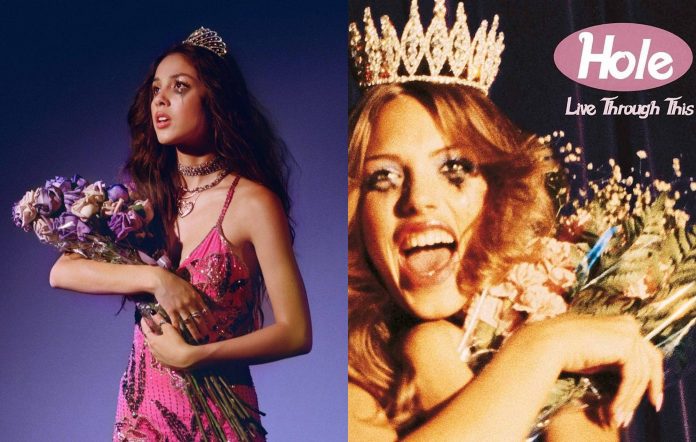 A few weeks ago, Love posted a batshit crazy rant on Instagram shaming Dave Grohl and trying to #metoo Trent Reznor – and she almost immediately took it down – but she is now after a much younger artist, Olivia Rodrigo. She called out the young singer on social media for her new promo photo, comparing it to the cover of Hole’s famous album ‘Live Through This.’ Rodrigo effectively shared a photo of herself wearing a pink dress, holding a bouquet of flowers with a tiara and mascara running down her face.

Courtney Love got mad but the photo is not even the cover of Olivia Rodrigo’s new album, it’s just a promo for her forthcoming ‘Sour Prom’ livestream event on June 29; after all, Olivia is only 18 and it’s prom season. However, for Courtney, the photo is about her, about her band, and an album that was released in 1994. Listening to Rodrigo’s music, I doubt she has found her inspiration in the grunge movement, so you will have to blame the photographer before calling out the young Olivia.

I understand that Love thinks it’s the most influential album of all times, but it has little (nothing) to do with Disney princess Rodrigo. Then, the event was advertised as ‘the ultimate alternative prom experience’ and, as many pointed out, the promo photo resembles much more to the prom scene from Brian de Palma’s Carrie, when Sissy Spacek is holding the flowers, just before being splashed with the bucket of blood.

Still, this didn’t stop Courtney Love from posting Olivia’s prom photo on all her social media, triggering thousands of comments from her sycophants. As for Courtney, she pretends this has nothing to do with ‘Carrie’, and that her original idea was stolen. She wrote:

‘it was rude of her, and geffen not to ask myself or Ellen von Unwerth. It’s happened my whole career so i.d.c. But manners is manners.’

‘I’ve asked her for flowers and a note, your right. It’s rude not to be asked. I know Ellen von Unwerth [the photographer] isn’t amused.’

This story screams attention whore. Courtney Love, the woman who has insulted the entire music business, the woman who has punched Kathleen Hanna in the face and threatened Kurt Cobain’s ex, is talking about rudeness and manners. Nothing will ever change, and this is just the attitude of a true narcissist.