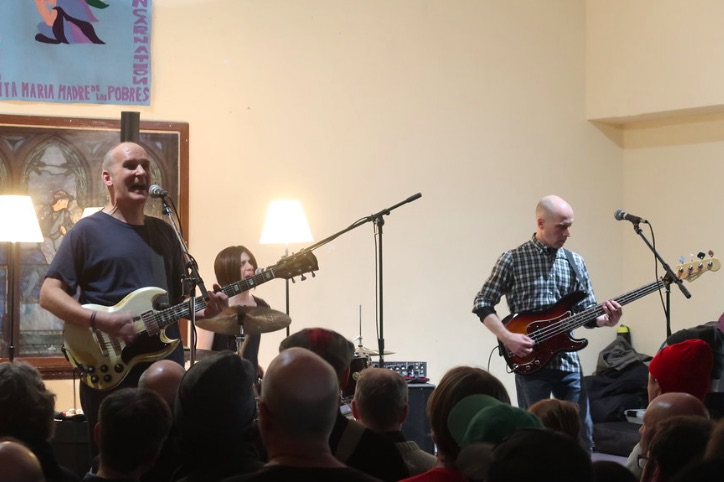 The song has a big hook, plenty of vocal harmonies and an infectious rhythm section, as clean as its title, ‘Clean Kill’. The tune also dies midway but regains vigor with emergency and furor plus a little of fuzz before abruptly stopping.

When Fugazi posted ‘Clean Kill’ on their social media on Tuesday, a lot of their fans got very excited for a good reason. It is actually the first single of an upcoming 11-song debut LP by Coriky, a band from Washington D.C. combining members of Fugazi and the Evens and featuring familiar names: Joe Lally is on bass, Ian MacKaye is on guitar and because it’s a family affair, Amy Farina (MacKaye’s wife) is on drums. MacKaye is also on lead vocals, but they all sing, thus these harmonies!

Coriky actually made its live debut late 2018 when they played a benefit together at St. Stephen and the Incarnation Episcopal Church in Washington D.C., (photo above), but at the time they didn’t even have a name. They have since recorded one album and have announced that they will tour.

I have no clue about the meaning of their moniker, and the lyrics of the song are quite cryptic – ‘Soap and water will never get rid of that spot/That she’s got?’ – but while the music is neither Fugazi nor Minor Threat, the song has a strong groove and the melody is super catchy.

Coriky will release their self-titled album on March 27th, via MacKaye’s Dischord Records, and the album is currently available for pre-order on LP/CD/Download via Dischords site and through the band’s Bandcamp page.

Here is the tracklist of ‘Coriky’:

Listen to ‘Clean Kill’ below: