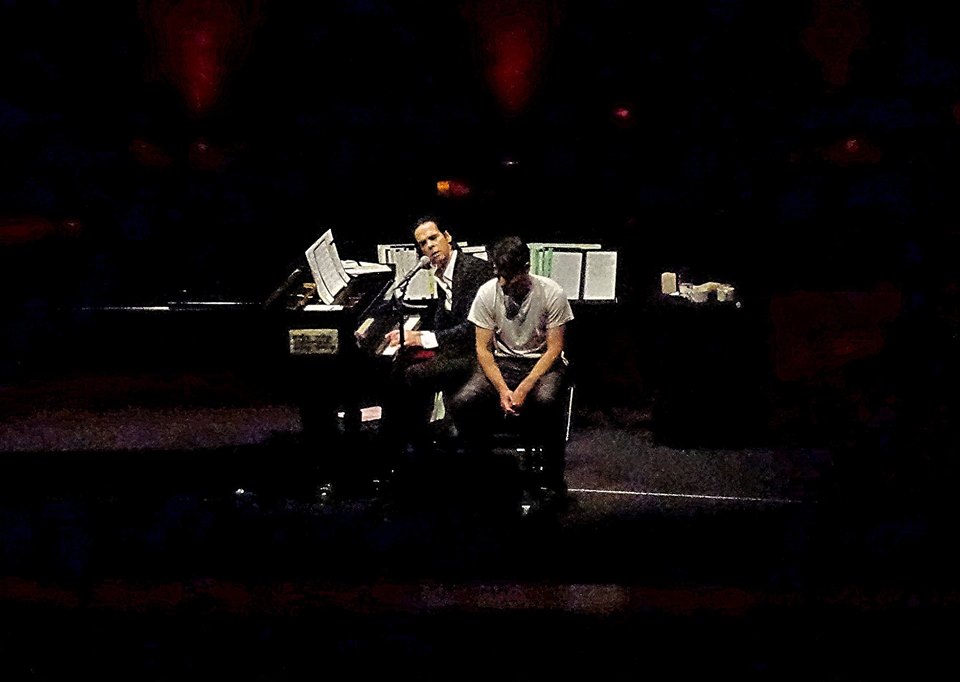 Very few people go through life without experiencing trauma and tragedy, but very few people find a way to articulate their tragic experiences and express their complex feelings as Nick Cave does. These were the words of wisdom, as a man who had lost his daughter put it, the words of someone who went to hell and back but chose to open himself to the world instead of retracting on his pain.

Last night, the last show of the ‘Conversations with Nick Cave’ tour was happening in the majestic Walt Disney Concert Hall, the perfect place for such an event. Nick Cave has been doing these conversations as an extension of the Red Hand Files, the website he uses to answer questions sent by fans, and on a postcard given at the entrance, a question and answer precisely was reading like an entry of the Red Hand Files:

Q: ‘Why are you doing these events?’

A: ‘This is something that I am in the process of discovering. I am acting on an intuition that something of value can be gained from an open and honest dialogue with my audience. I want to bring the whole thing back to something raw and naked and essential. In this respect, these events feel like reckless experiments – there is no safety net – and are, one some level, beyond my control. They are freewheeling adventures in intimacy where anything can happen. I hope that this further deepens the connection I feel with my audience. These events are works in progress!’

The show lasted close to 3 hours, with Nick Cave taking questions from all over the 2,000 seats of the Disney Hall, and eventually seating at his piano to play songs from the Bad Seeds repertoire and beyond. He ended up playing 11 songs during the night, sometimes provided by the conversation, like ‘The Mercy Seat’ after a question asked by someone who had worked with death row inmates, or chosen by someone, ‘what is your favorite song?’… ‘Into My Arms’.

Since he opened the Red Hand Files about a year ago, Nick Cave has received a lot of questions, and such an impressive number of emails – ‘Thousands and thousands and I read them all’, he told us, ‘I read hundreds of questions a day!’ – that he wanted to pursue the experiment. ‘It’s a long-form [on the RHF website] and some people can even write short novels’, he added with humor. It is clear that the experience has turned into something unique and several times during the evening he will tell us how good it feels for him to do this, ‘it’s a privilege to be part of this ‘.

If I had to sum up the night I would say it was filled with poignant exchanges between Nick and his audience and some heartwarming humor, always present even during the most difficult and teary moments. Unavoidably, there were plenty of questions about loss, grief, betrayal, trauma, and Cave is a man who has put so much deep thinking into what had happened to him that each answer was elaborated, and deeply meaningful.

‘When did you become this humanistic, loving person wanting to share everything?’ asked a man, and the answer was given without any hesitation: ‘It changed when my son died’. At this moment, Nick Cave revealed himself very vulnerable, almost naked, explaining, ‘I used to put myself up, to have an adversary relationship with my music and my audience, then the whole thing shattered in all directions, I tried to grab the pieces and to put things together, but I was a different person’.

This new Nick Cave is well aware that in a sense, what happened to him ‘is very ordinary at some level, because it happens to all of us’, ‘We all are part of this river of sorrow, at some point we experience it’, but it’s clear that he is now offering himself to audiences all over the country as ‘a way to survive’. During these conversations, the new Nick Cave finds deep connections with other people, like the ex-addict saying he had been cleaned for 4 weeks, or this young woman who had escaped a cult and was still traumatized by her childhood, or this woman trying to overcome betrayal, or this father who talked about losing his daughter. It is amazing how much people are willing to share in public, poignant and deeply personal stories, and if the entire thing sounded like therapy, it was difficult to decide who the patient was. ‘This is an act of survival,’ Nick told us. He doesn’t see these conversations as an act of bravery, ‘I feel incredibly privileged to do that, it’s not courage, it’s just survival, it keeps me alive’… ‘I don’t know what else to do’.

Beautiful and powerful stories were shared, like this man telling us his experience at The Bad Seeds‘ concert at the Forum last year. He was in a wheelchair at the time but got a front-row seat: ‘You made me part of the experience, you grabbed my hand for too long!’ he explained with emotion. ‘You are not going to #MeToo?’ joked Nick.

Probably, the most inspiring part of the story is not that Nick Cave can answer questions coming from perfect strangers, but that he can articulate his survival so well, and that he can find some terrible beauty behind trauma: ‘In grief or betrayal you have the choice between being resentful and bitter or adopt a defiant ‘fuck you’ optimism’. There is no doubt about Nick Cave’s choice, and he has even found a source of strength in the experienced trauma, he has discovered new defiance… because what else could happen when the worst has already happened?

Perhaps the most intense moment came when Nick mentioned the unknown: ‘I have given myself over to the unknown, given myself over to what is beyond the truth’… ‘We have a survivor instinct toward magical thinking,’ he added but ‘we don’t need to feel ashamed to think there’s something beyond, even though it’s not true.’ For Nick Cave the absurd is there, ‘Giving yourself to a possibility that probably doesn’t exist’, but he knows that this is essential to his art. ‘A yearning exists in my songs, a longing for something that probably doesn’t exist, but it is not my business to answer these questions!’… ‘Atheism is bad for the business of songwriting’.

Nick Cave has just found a second life, he has become a better, more compassionate man with a new relationship with the world, ‘Before I defined myself as an artist, after the trauma, I define myself as a father and husband’. Fortunately for his fans, he is still an artist who even declared last night that ‘Love songs will save the world’ and that ‘music is the greatest achievement of mankind’.

‘Ghosteen’ may be the end of a trilogy, but it’s is certainly not the end of Nick Cave’s career, and this is the most beautiful part of all this: He has the deep feeling he is still in the middle of something.

Some other thoughts and moments captured during this amazing evening:

– He worries about the younger generation who are writing too cautious lyrics (when talking about ‘Stagger Lee’). He sang the song while a young guy had taken the freedom to share his seat after being invited on stage.

– After his son’s death, he had to renegotiate his relation with his songs as the meaning of some of them had changed radically.

– ‘Ghosteen’ is sort of one long song, and many songs of the album were improvised. On Tuesday night, he didn’t play any new songs, but they will be performed live in the future.

– Warren Ellis is a gift from God for him.

– Coming to LA felt so free, and he finds Los Angeles to be an exciting place to live, he loves the people and the wilderness with hawks and skunks at just 5 minutes away from Sunset Blvd.

– He would like to see Patti Smith doing these conversations because she is an unsafe speaker.

– He loves Snoop Dogg’s recent version of the ‘Red Right Hand’, ‘I am finally embraced by hip-hop!’

– His most difficult heartbreak was PJ Harvey because it was so sudden,… but he got a lot of songs out of it.