Concerts During Pandemic Times: Anything Goes 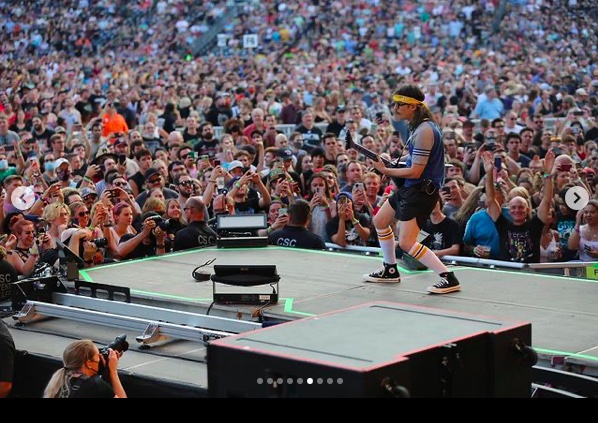 In these times of great incertitude, there is a lot of inconsistencies regarding concerts and venues. Many venues now require people to show proof of vaccination at the entrance, but it is not the case everywhere. Small venues, which tend to rely on people’s alcohol consumption, often do not require anything, and if wearing a mask is highly encouraged, I have been to many places where people were not wearing a mask inside, whether they were drinking or not. Concerts during pandemic times can be quite confusing.

As for the artists, everything goes: Limp Bizkit canceled their entire tour – they had a date here in LA in the upcoming months – and Fred Durst explained that he didn’t think a tour was a good idea given the circumstances: ‘In short, the system is still very flawed. Even if the performers, crews, staff, and promoters do their best to ensure safety on and behind the stage, that doesn’t ensure the safety of the audience as a whole,’ he said to Billboard. ‘We are all in this together, and we all — individually and as a whole — have to make our best efforts to be as responsible and proactive as possible moving forward to combat and stop spreading COVID.’

Stevie Nicks has also canceled her 2021 dates –she was supposed to perform at Austin City Limits, Jazz Aspen Festival, and BottleRock Napa Valley –  explaining in a statement that she was putting her health and age first: ‘These are challenging times with challenging decisions that have to be made. I want everyone to be safe and healthy, and the rising COVID cases should be of concern to all of us. While I’m vaccinated, at my age, I am still being extremely cautious and for that reason have decided to skip the five performances I had planned for 2021. Because singing and performing have been my whole life, my primary goal is to keep healthy so I can continue singing for the next decade or longer. I’m devastated and I know the fans are disappointed, but we will look toward a brighter 2022.’

A few days ago, Counting Crows also canceled their show in Boston, after a touring party member tested positive for COVID-19. Los Lobos have canceled their upcoming appearance at the OC Fair on the 15, and Roger Daltrey has canceled his show at the Pacific Amphitheatre on the 29. On a smaller scale, a mini-festival at the Echoplex that was supposed to happen this Friday has been canceled/postponed ‘due to concerns over what can happen when we (platonically/respectfully) touch our friends.’

Meanwhile, the Foo Fighters have rescheduled their concert at the Forum on the 26 and the Hella Mega tour (with Green Day, Fall Out Boy, and Weezer) has started and they are supposed to play on September 3 at the Dodger Stadium, a venue with a capacity of 56,000 seats!

So there is no logic at all, mega concerts like the ones at the Forum and the Dodger stadium are happening while a small gathering at the Echoplex (of a few hundred people) are postponed because there is a concern? Fred Durst and Stevie Nicks are not wrong, this is still risky to gather a lot of people in the same room, while data and info are almost changing on a daily basis. Although the vaccine is still strong protection against the virus, we now know that vaccinated people can spread the virus. Thus 17,000 people showing their card at the entrance of the Forum is not a guarantee that the event will not be a super spreader.

I suspect it will be the situation for a while. The Foo Fighters and Weezer of the world will continue navigating the pandemic while other events will be canceled. I didn’t know how venues would eventually reopen but I naively expected more logic. The Fonda and El Rey haven’t still reopened their doors, but Weezer played a 40,000-seat venue last weekend? I know it was outdoors, but these mask-free people seemed really close to each other.