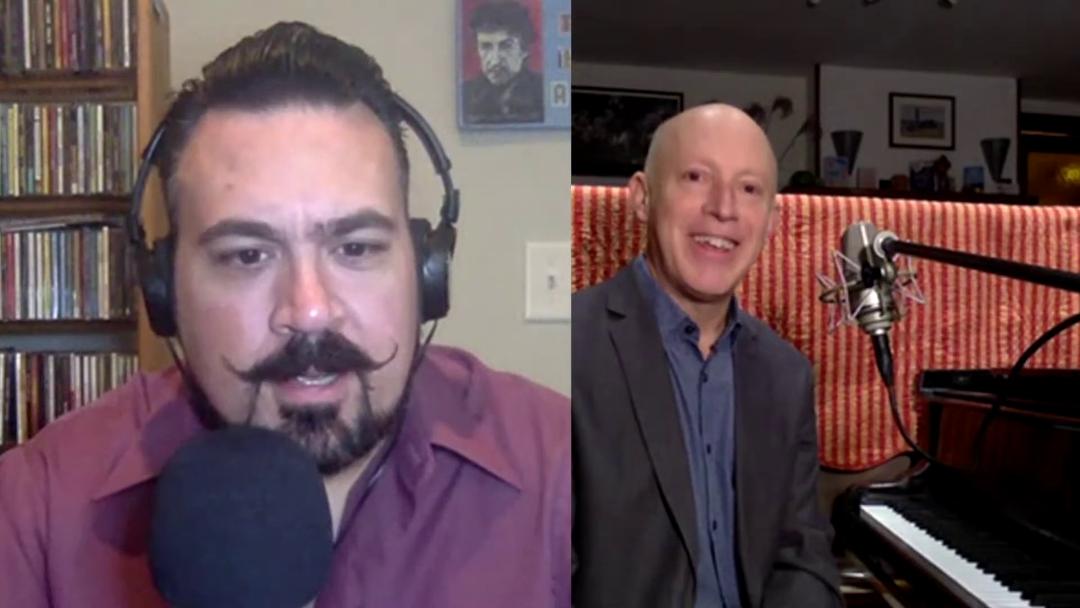 Conal Fowkes is not necessarily a household name but I’ll bet you’ve heard his music. If you have seen any Woody Allen films in the last decade, chances are you have. For he’s been for many years the pianist who has played with Woody at his Monday evening gigs at New York’s Café Carlyle, and more recently has replaced Dick Hyman as Woody’s go-to pianist for his films.

It was a thrill for me to see and hear Conal interviewed recently by the wonderful Paul Leslie on his podcast The Paul Leslie Hour (here). Paul and I share a love for Conal’s album Dizzy Fingers which is only available on his website (here).

Like most working musicians, Conal has had a lot of time to reflect at home these days. Although he performed last summer at a virtual jazz music festival in Spain, he’s spent his days spending “many, many hours of private practice which has been sort of a luxury.” Aside from practicing, he’s also been learning to use some home recording equipment. Among the pianists who have influenced his style but among the standouts include Jay McShann and Oscar Peterson whom he was introduced to by his father. Other major influences include Fats Waller, Teddy Wilson, James P. Johnson and George Shearing.

On the subject of the loss of his dear friend and band leader Eddy Davis, Conal says he “was a larger-than-life character. I was around him for twenty-two years pretty intensely; he was one of the most exuberant and enthusiastic musicians that I’ve been around, and that kind of vibe really rubs off. I’ve got to thank Eddy for a million things that he turned me on to, that he introduced me to musically speaking … Eddy could see the kernel of a piece of music very quickly and make you aware of it. He had an amazingly packed life; he was almost 80 when he died, and he seems to have put into one life what most people would need two or three lives to do. He grew up at a time that was maybe a richer, healthier time for jazz music. So, he was right there with a lot of the greats that were making that music and taking part in it. Conal recalled a friend telling him “when someone like Eddy dies it’s like a library was burned down. Another Eddy Davis is not going to come along again.”

He and his fellow jazz musicians feel fairly certain that they will resume shows at The Café Carlyle, but they can’t return until the city and the union of hotel workers allow for shows. It was Eddy who founded the group so his presence was very large when they played together – how shows will go on without Eddy and his banjo remains to be seen. Regardless, I hope to be at a table in the audience to welcome them back.