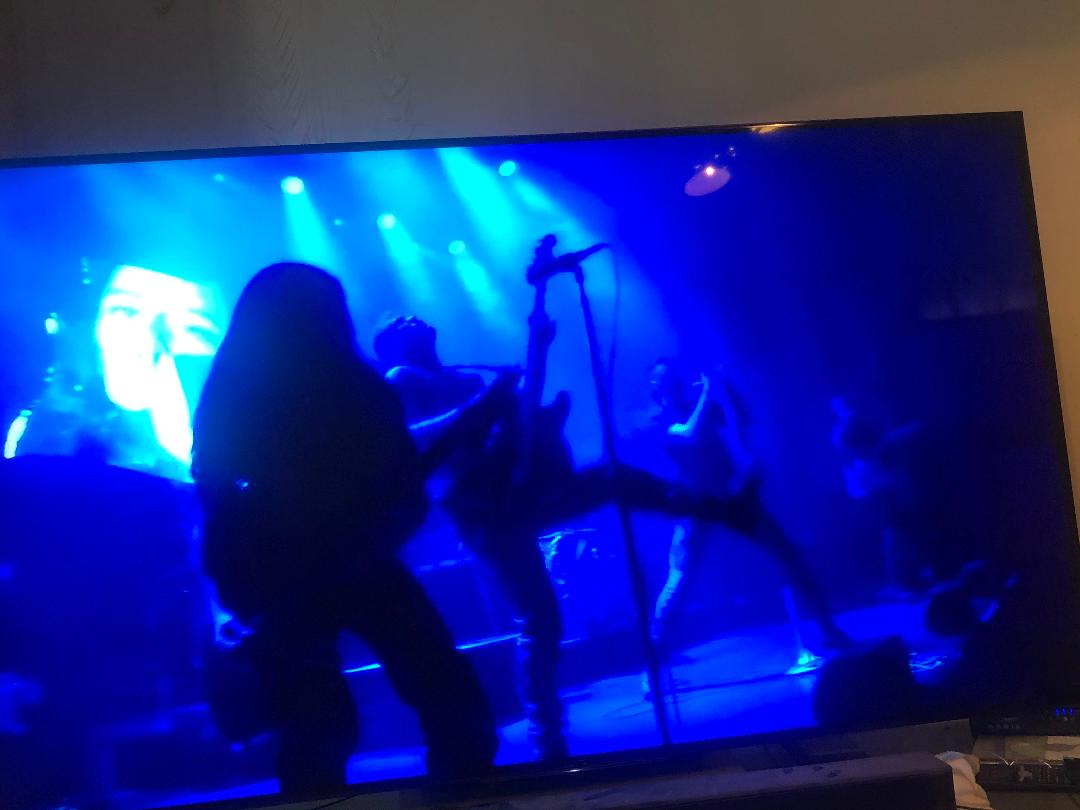 Code Orange are the Pittsburg, PA metalcore rockers with a screamo lead singer in Eric Balderose and a strong voice and melodic, who can also go bowels from hell, second singer in Reba Myers, and a power on sound that veers close to being something else again. Their latest album, Underneath, adds electronica to their hardcore and vicious sound, and when their album release party (with a five band deep line up) at their hometown’s Roxian last night was cancelled due to Coronavirus,  they decided to perform to an empty room, with visual asides aplenty.

It’s a great idea, and a strong set, with seven off Underneath, and an additional six off two of their previous three albums, and a song off an EP, they travel their career will an efficient, stage sharing earfuck. Streamed on Twitch Saturday night at 9pm, it wasn’t really the Code Orange live experience, they played too much with visuals, integrating the AI silver surfer dude with the physical performance, and interrupting for commercials all the time.

Also, the more hardcore you see, the more cliched it becomes, waving your long stringy hair and crouching tiger around the stage gets old in the same way rap has all the same moves on stage, visually Code Orange could be Four Years Strong. But if you are a fan, Code Orange performed a serious introduction to a very good album, and if you’re not this could open the doors to hardcore. Opening with two songs off Underneath before stepping back three years, the sound is seriously exciting with one of the great drummers joining the band, Chris Vrenna: Chris played drums on Nine Inch Nails The Downward Spiral: no honestly. It is hard to overstate how much he adds to the band, they are now the thunder and lightning of the best hardcore bands around, with an industrial side dish of noise and some melodic singing to add to the mix. It is spectacular.

The highlight of the evening wasn’t Shade calling out the “ratfucks who don’t care about any of us” with a shout of “I AM KING”,  but the greatest moment of their career, a breathless and breathtaking coming of age “Sulfur Surrounding” which I had admired on record but wasn’t prepared for live, the dual  vocals hammering the inside of my brain, it twitches in electronic horror and in bowels of hell singing, but then it goes straight from time to time as well (it is 37 minutes into the video below), and together is a multi-level game of horrorshows on the place where teen boys live (Fortnite is here, need I say more?).That one two, first “Sulphur Surrounding” and then “I AM KING”,” were the highlight and the calling card, when they eventually tour with it (a show I had no intention of going t and now absolutely plan to), it will kill you where you stand.

It was great and not good enough. It isn’t being there and Code Orange was aware enough to play with the format, and I wish they’d pulled away much more often to reinforce the emptiness of the venue , and I wish the commercials didn’t interrupt so much, and, well, silence ain’t a great idea. But I loved it for all of that, a must see so stream it below.