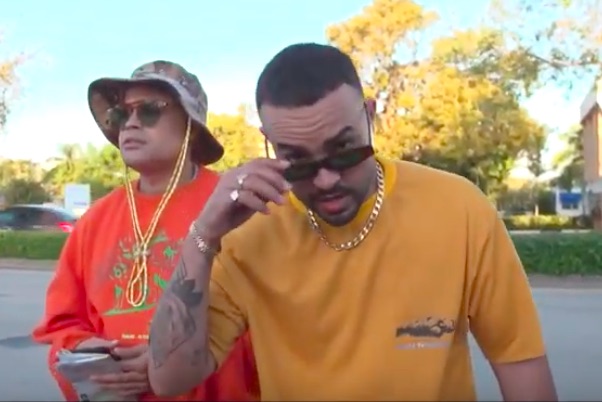 After the successful release earlier this month of their new single “Salvaje,” featured on 18 playlists and amassing +71 million impressions on Instagram through posts by artist friends and colleagues such as Lele Pons, Karol G, CNCO, Sebastian Yatra, and Luis Fonsi to name a few, the duo excitedly releases visuals matching the song’s hype.

The behind the scenes of the video was captured by Univision’s online channel KiuBo and the video was premiered last week exclusively on Unvision’s celebrated morning show Despierta America.

“It was an Interesting shoot to say the least between SWAT Team’s raid on the room three doors down (no lie) and a few sketchy motel guests who basically became part of the set, we had a blast with the crew and the cast which made the extremely long day a good ol’ jangueo (hang),” explains Jean Rodriguez about filming “Salvaje.”

Miami-based social media influencers such as Christian Melendez, who played the concierge, Fireman Gucch andRawndell, who played the spectators witnessing Danny from COASTCITY being attacked by the savages, and model Nadia Politano, featured in the pool scene, were all part of the video’s cast.

“One thing is to be part of a record on the production side and another thing is to see yourself on the screen and the song being brought to life. It takes things to another level! In the video it’s unclear whether we were part of an epic dream or a living nightmare…we left it open for interpretation as I escape and we don’t know what happens to Jean,” states Danny Flores.

The production collective Retronomad, known for their work with artists such as Lil Wayne, Ace Hood, Dvicio, and Mau y Ricky and for directing COASTCITY’s previous video “Desconocidos,” brought the duo’s vision to life via film.

“For ‘Salvaje’ we wanted to really push ourselves creatively and do something we’ve never done before which was to experiment blending digital with Super 8 film. When working with film there’s always a sense of uncertainty where you’re not sure if what you’re shooting is even going to show up but getting the scans back and seeing it all there is the greatest feeling. We love working with the guys because it’s always extremely collaborative through the entire process from coming up with the concepts, to the final edits, and we value their input every step of the way,” states Retronomad.

Behind the scenes of “Salvaje” by KIU BO – Univision