“New EP No Saviors – which closes with hypnotic mega-hit “Lay Back” – sees CLAVVS inject a new sparsity into their addictive electronica.”
– The Line of Best Fit

“As CLAVVS, they’ve hit on a sleek and suitably mysterious pop sound that straddles spacey trip-hop and ingratiating pop, with notes of psychedelia to keep the mix feeling ever-so-slightly off balance.”
– NPR

“The duo, consisting of Amber Renee & Graham Marsh, deliver a passionate Portishead-esquevocal performance and a lush instrumental production that help drive the evocative lyrics right through your soul. The songs intense instrumental builds carry along a burning resolve that makes this track feel so empowering by the end.”
– Earmilk

“CLAVVS mix killer pop hooks with dance/hip-hop rhythms, Renee’s sublime vocals, and subtle electronics…”No Saviors” is a song that delivers immediately on impact, drawing you into its singular world.”
-PopMatters

“Exemplifying a world-aware consciousness as well as an appreciation of world music, the Brooklyn duo construct a vibrant soundscape for listeners to lean into and get lost in.“”“Echo”, a new song that finds the two-piece attempting to let go of the past. “Your face is haunting my mind/ And even when I dream/ You find your way into my dreaming life,” Renee sings. Her laments are backed by a swirling production that evokes the feeling of being swept up in a whirlwind of wistfulness.”
– COS

“On their recent single ‘Lay Back,’ which hit #1 on Hype Machine last month,CLAVVS showcased a very chill sound evoking the song’s namesake phrase. Now, on ‘Slow Dive,’ CLAVVS are showing off their sonic evolution a little bit more…”

On Friday, Brooklyn alt-pop duo, CLAVVS release their new EP, No Saviors. The day before they were featured in The Line of Best Fit’s Discovery section where they shared the track, “Violet Sea,” and praised the duo, saying “It’s a brave step to acknowledge that less is more – particularly in the world of pop music. As a duo known for their rich, lush soundscapes, this holds particularly true for CLAVVS.” Tap into No Saviors here!

Prior to the release, they shared their new track “Devils I Know” on Earmilk and also shared the EP’s title track on PopMatters. They were also recently featured on NPR’s Austin 100 which highlights top artists at SXSW 2019.

In December, CLAVVS released their three recent singles in a package. The latest single “Echo” was shared on Consequence Of Sound with an Origins piece, in which they explain their influences for the track. “Echo” is also the theme song to Nike’s new podcast, The Fenom Effect, and was on CW’s Charmed. “Devils I Know” has also been featured with a minute and a half sync on the show. A few weeks ago they premiered the track “Slow Dive” on The 405 and also recently hit #1 on The Hype Machine popular chart with their track “Lay Back” (featured in Spotify’s Young & Free playlist). “Lay Back” will also be featured on the new ABC show “Grand Hotel” out this summer.

Check out some upcoming CLAVVS tour dates below!

CLAVVS is a duo of accidental best friends. Amber Renee and Graham Marsh might never have met if not for a last minute text invitation to a stranger’s house party. Conversations were shared. Jokes were made. Tunes were played. Soon they were writing the songs that would become their first CLAVVS releases.

Two albums later, Amber and Graham have dialed in their sound, one that merges his obsession with world music sounds and hip hop drums with her imaginative lyrics and off-kilter pop melodies. The result is both familiar and otherworldly, a distinctive sound that has earned the duo praise from Consequence of Sound, Earmilk, and The 405, who calls CLAVVS “indie hitmakers.”

Despite their often dark and hypnotic sound, there is something hopeful and human in their music, which is evidenced in the genuine nature of their live show. It’s easy to understand why they’ve shared a stage with fellow indie acts Ibeyi and Rhye. Amber and Graham are energetic and emotive, unafraid to move to their own rhythms.

Perhaps that would make sense, given that Amber grew up performing in musical theater and singing her original Americana songs at local venues. And Graham spent years on the major label side of the industry, earning four Grammys for his work with acts like Bruno Mars and Gnarls Barkley before walking away to find a place in music that felt a bit more human.

CLAVVS is just that— an alternative pop band that examines human experiences with candor and imagination. Based in Brooklyn, Amber and Graham craft songs that subtly challenge and subvert the pop genre, an element that stands at the heart of everything they make.

CLAVVS’ music has been featured in MTV’s Teen Wolf, The CW’s Charmed, Nike’s The Fenom Effect Podcast and in ad campaigns and global in-store playlists for brands like Becca Cosmetics, Urban Outfitters, and American Apparel. Their sophomore album World Underwater charted at no. 60 on the NACC chart, with noteworthy praise from KCRW, who called CLAVVS one of their “new favorite bands.”

The duo’s three new singles, “Lay Back,” “Slow Dive,” and “Echo” have accrued hundreds of thousands of plays across platforms. “Echo” is the theme song for Nike’s Fenom Effect Podcast and is currently featured in Spotify’s Pop Chillout playlist. “Lay Back” and “Slow Dive” both charted in the top ten on Hype Machine, with “Lay Back” reaching number 1. 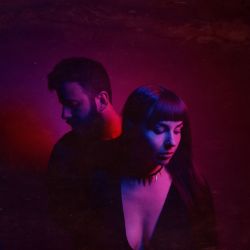 Tracklisting – No Saviors1. Devils I Know