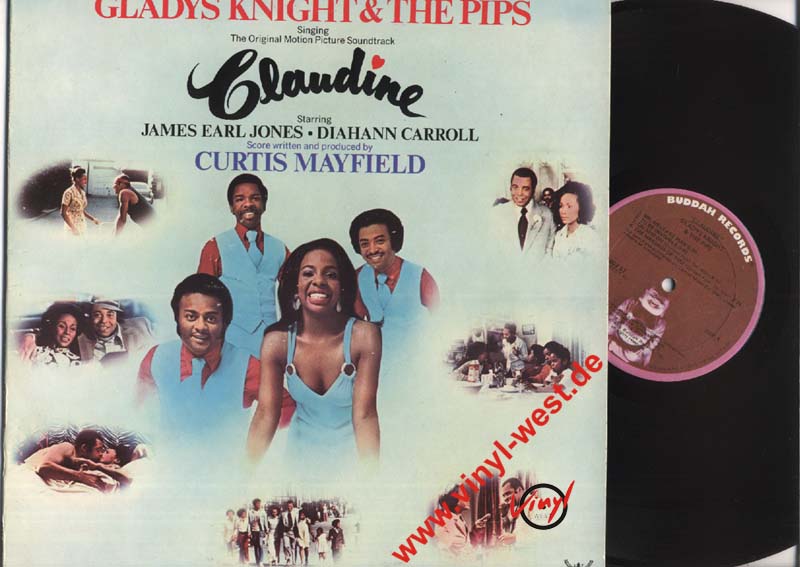 Or Curtis Mayfield’s second soundtrack and seventh solo album, and a return of sorts to the deep harmonies that fueled his years with Impressions. The motion picture  “Claudine” was the late black actor Diahann Carroll and Darth Vader himself James Earl Jones take on welfare and the lower middle class experience. If “Superfly” found the gangster ethos  of urban American getting trodden upon, in “Claudine” the basic freedoms are squashed out. No one ever doubted that marriage was a business arrangement, but did we believe that the Government had a hand in the decision making process?

That is the story of “Claudine,” where a divorced woman with six children can’t marry a garbage collector because she would lose her welfare benefits in this rom-com of horror from 1974. “Can you dig it?” is the tagline and the answer is, if you can’t afford to take care of them, why on earth have six children? And another answer is, it was a different time with a different set of mores, and it sticks it to the racist welfare systems who claim living is the same as gaming the system.

Gladys Knight and the Pips had broken pop five years earlier when they signed to Motown, and followed through after leaving for Buddha Records in 1973 with their smash breakthrough “Midnight Train To Georgia”. So a year later, it made sense for one of the biggest names in black pop to work with a very hot vocal band, on the soundtrack for a movie starring Julia herself, the first black actress in a TV drama that was in a no-stereotypical role, she was the harbinger for not just “Cosby” but also for “Blackish” -the entertainment media becoming a superb outlet for the brilliant actress. James Earl Jones was and is one of the great American actors. A powerhouse duo to bring out middle class black America to the movies, a vision of life and community as lived.

It was, in fact, a packaging in search of black spending money, and, while as a movie it isn’t terrible, and is, in fact, better than the next time Mayfield would be involved in a movie, as a soundtrack it has its weaknesses. It’s easy enough to hear the problem, replace Gladys Knight And The Pips version of Mayfield’s (off his first solo album) “The Making Of You” and what differences do you hear? Not much. Where are the Pips? If Mayfield wanted to rearrange the song for vocal harmonies, why on earth did he kill the harmonies? What did he gain by having Miss Knight do a straight up cover, a song that adds nothing to the original. It is as though Knight is being subsumed into Mayfield’s vision and can’t exert herself on the, admittedly, fine material.

Listen to Gladys’ (original by the way) version of “I Heard It Through The Grapevine” -it is a pull and response between Knight and the Pips, Knight in full Gospel mode and the Pips a Greek chorus that is equal parts Gladys subconscious and the grapevine itself. This is the sort of musical acumen Mayfield fails to grasp on the album, the biggest hit on the album, a funky workout that went top 5 on the Hot 100 but sounded so much like Curtis it makes you wonder if Gladys was overwhelmed by the towering presence. Except the Pips had been around since 1952 and it is hard to imagine the band under undue influence. It is more like that Gladys loved the songs,  the self-evident “Mr. Welfare Man,” the stirring ballad including string arrangement “To Be Invisible” underlying  the most insidious nature of racism, and the best use of the Pips “Make Yours A Happy Home,” none of these songs are top tier Curtis, but they all fit into the motion pictures framework, they are all clearly written for the film, and they all make the sort of everyman Black Middle Class integration into white society, the normality of the other. Curtis point has always been that the black experience is the white experience, the same peoples, only one of them is under extreme duress. That’s where he is going.

All of this is in Mayfield’s wheelhouse, it is what he has done as a songwriter since his earliest days of the Impressions, taking the exotic otherness out of Black America and letting it breathe on its own  through its life as lived for people under the jackboot of institutionalized racism. With “Shaft,” the hard funk was from hard men who saw the only way out through violence, “Claudine” doesn’t offer a way out of poverty and racism as such,  except through love and community, through friends and family uniting to show a common front to the world.

Undoubtedly, Knight was too much a pro to question Mayfield on “Claudine,” these were songs pointing to a change that had not arrived but should sound exactly like this, because the heroism of community is not the same as the heroism of a gangster, it is the difference between many and one. Knight wanted to sing this and she let Mayfield teach her but it was misleading, Mayfield could write the Pips harmonies and backing vocals with ease but he failed to get Gladys to sound like Gladys. Consider it a great failure (the entire motion picture posted below the grade).