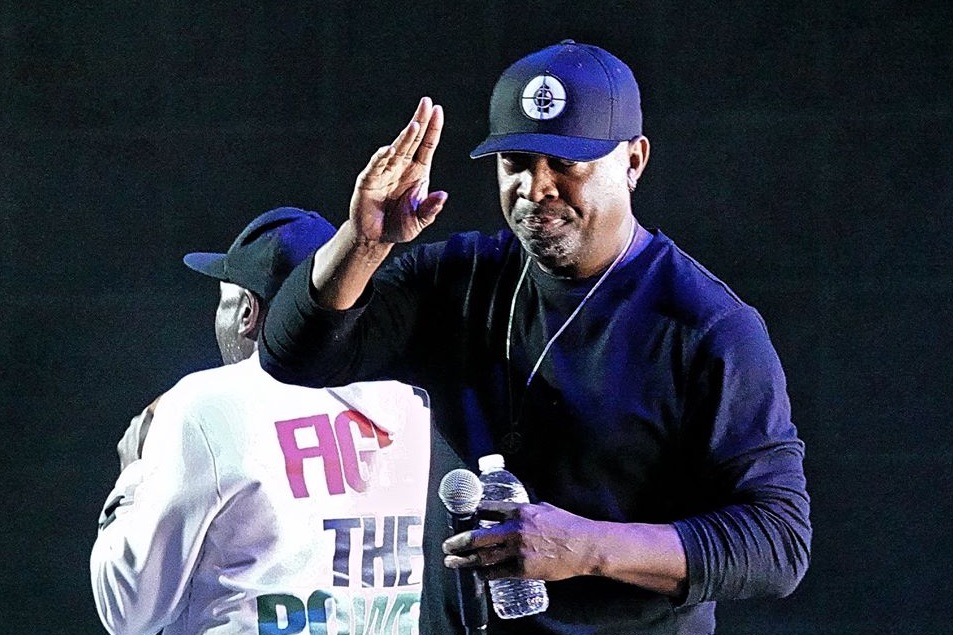 It’s clear that Flavor Flav does not support Bernie’s campaign and doesn’t believe in his revolution: ‘The Public Enemy Movement cannot allow its cultural identity likeness and life’s work to be misappropriated by political operatives in support of a fictional revolution – Don’t Believe the Hype!’

Flav had apparently a big problem with the use of ‘Public Enemy’ and wanted the endorsement to be instead ‘Chuck D of Public Enemy’, as he even added in Sharpie at the end of the letter: ‘Hey Bernie Don’t Do This’ Flavor Flav’

Since that time, Chuck D has been very vocal on his Twitter account, explaining that the rally didn’t trigger the split, which actually occurred much earlier, pointing out Flavor’s greediness and his refusal to support many causes like Harry Belafonte’s Many Rivers Festival:

‘If there was a $bag, Flav would’ve been there front & center. He will NOT do free benefit shows. Sued me in court the 1st time I let him back in. His ambulance lawyer sued me again on Friday & so now he stays home & better find REHAB

‘his refusal to do @HarryBelafonte #ManyRiversFestival in Atlanta 2016 was my last time. I built Enemy Radio to get far away from that ridiculousness.’

Chuck D also added that 93-year-old Harry Belafonte was the one who presented Public Enemy’s induction into the Rock and Roll Hall of Fame in 2013, while Flav ‘cannot give a ounce of time to reciprocate that honor to his @Sankofa [Harry Belafonte] fundraiser-to judge a Bikini $how. #Ungrateful’

The hip hop icon also didn’t miss to point Flav’s lack of education: ‘It’s not about BERNIE with Flav… he don’t know the difference between BarrySanders or BernieSanders he don’t know either.’

On his side Flavor Flav has continued to dismiss the performance on Twitter: ‘@MrChuckD are you kidding me right now???,,,over Bernie Sanders??? You wanna destroy something we’ve built over 35 years OVER POLITICS???,,,all because I don’t wanna endorse a candidate,,,I’m very disappointed in you and your decisions right now Chuck,,,’

‘I’m not your employee,,,i’m your partner,,,you can’t fire me,,,there is no Public Enemy without Flavor Flav,,,so let’s get it right Chuck,,,’

Even dismissing Chuck D’s accusation he is on drugs: ‘i’m not on drugs like you’re saying and have been clean for 10 years,,,i have battled addiction before and like millions of other Americans I know the massive toll it takes,,,Chuck you know better than to lie about shit like that,,,,’

People and fans have been divided on the story, some have even criticized the fact that Bernie has ‘divided their favorite hip hop band,’ whereas the rift has been there for some time, as Chuck D said… Between TV reality shows, a restaurant adventure which didn’t go too well, numerous arrestations for drug possession and DUIs, it’s not as if Flavor Flav had had a glorious career since he put his music career on hold. However, you will still find plenty of fans mad at Chuck’s decision: ‘BERNIE SANDERS broke up Public Enemy, and Flava Flav is now the voice of reason?!?!?! SOCIALISTS destroy everything good about the societies that they parasitically prey upon.’

As a definitive answer to this controversy, Public Enemy (so Chuck D) posted this letter on their social media:

Public Enemy did not part ways with Flavor Flav over his political views.

Flavor Flav has been on suspension since 2016 when he was MIA from the Harry Belafonte benefit in Atlanta, Georgia. That was the last straw for the group. He had previously missed numerous live gigs from Glastonbury to Canada, album recording sessions and photo shoots. He always chose to party over work.

Public Enemy Radio toured Europe and co-headlined with the Wu-Tang Clan in May 2019 without Flavor. They have also done numerous benefit shows without Flavor.

While Public Enemy Radio was moving forward, Flavor Flav was starring on the reality show “Growing up Hip-Hop New York,” where an episode featured his children discussing an intervention and putting him into rehab.

It’s time to move on and everyone wishes Flavor well. 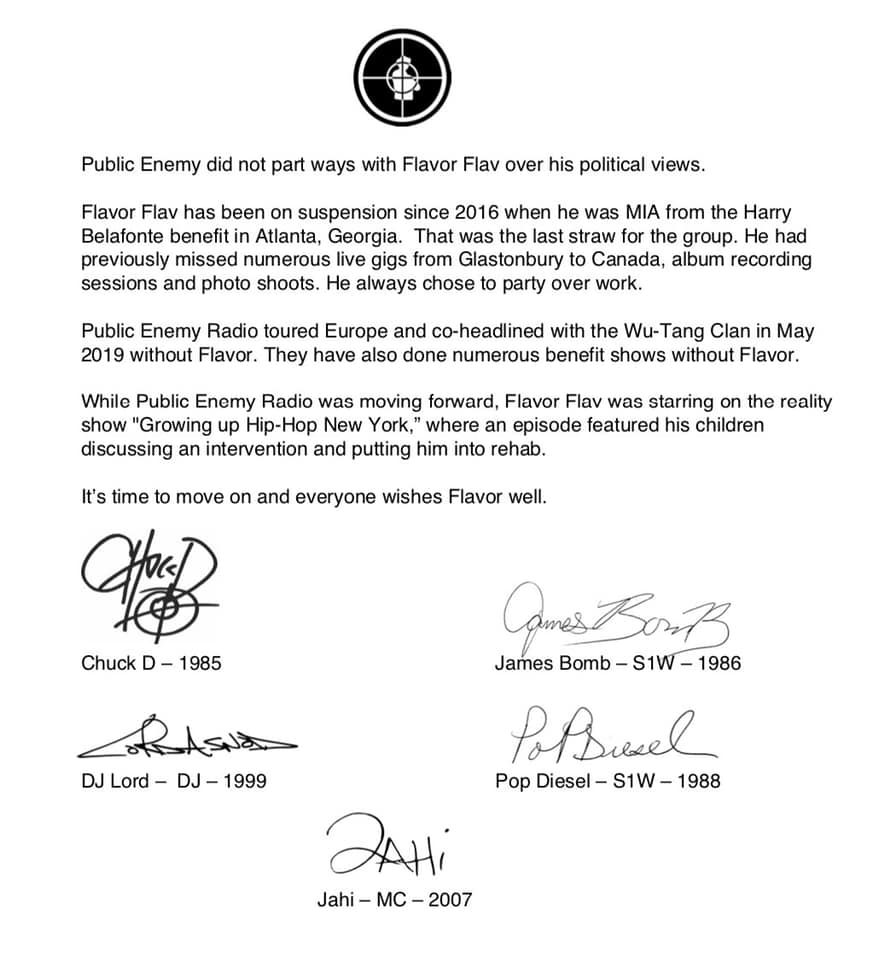