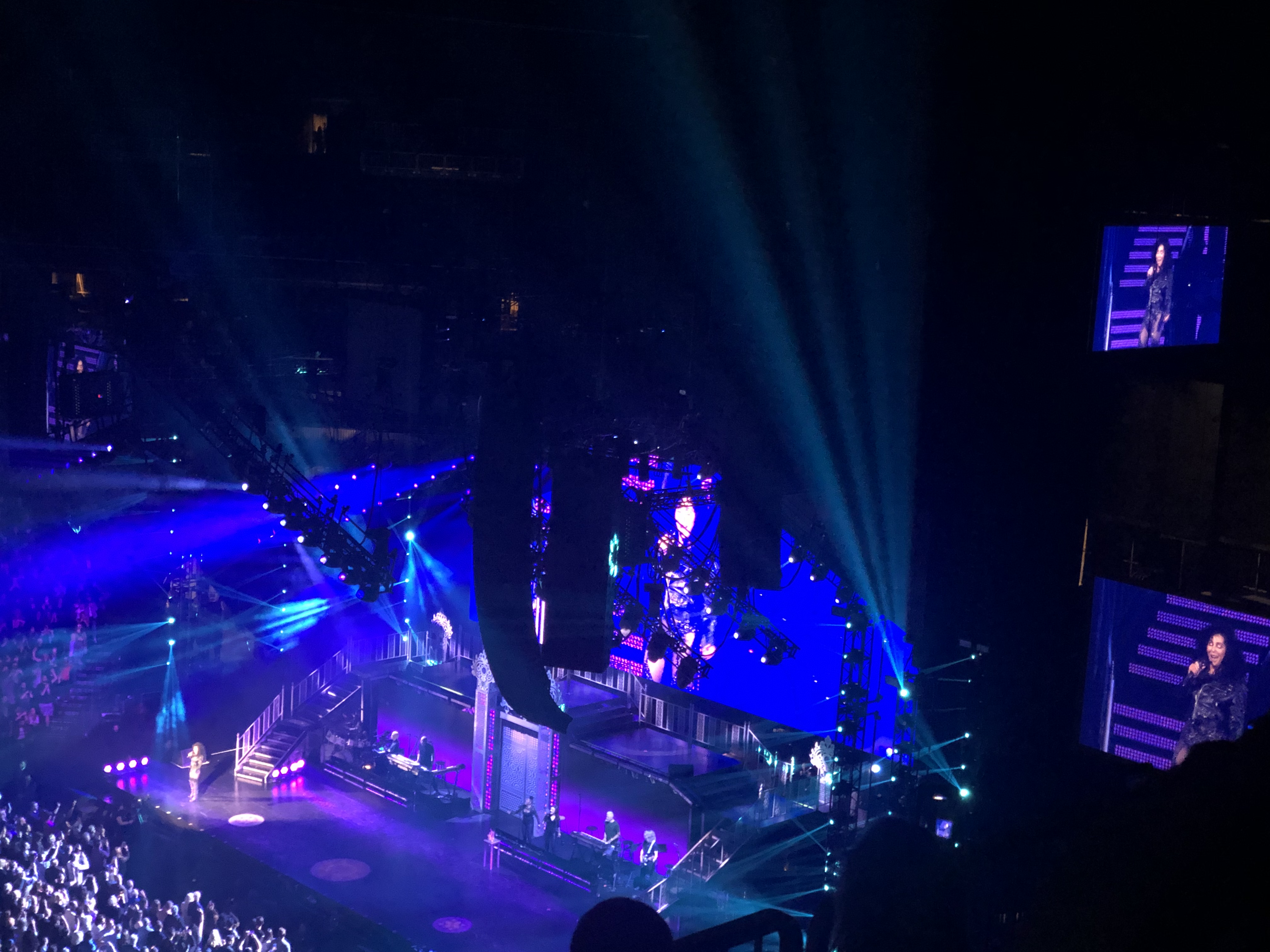 My friend, voice-over artist John Duffin, had this to say about Cher when he caught the tour in Philadelphia earlier this week: “I have never seen Cher perform live. It was my first time. She sounded great, although clearly lip- synced at beginning and end of show. I KNOW this was a cut and paste from other tours. Was new to me- so I loved it! However, if you’ve paid to see Cher before, you may not be as thrilled. Taking out FOUR classics from Classic Cher to replace with 3 ABBA was a misstep- although the ABBA songs sounded great. The energy was insanely good in Philly- helped to propel Cher (she seems to feed off the crowd.) Overall, really glad I got to see Cher and the last 3 songs were a great close!”

That’s one take, and opinion is opinion, but you’d have to be a more forgiving type than I am to go along with it. After a Niles Rodgers and Chic greatest hits performances that was exactly the same as the one I’ve seen maybe four times in the past five years, and an interminable break just like god planned it, Cher came on stage and performed a rousing “Woman’s World” and followed by a rousing “Strong Enough” Cher looked good, no, really good, it was like she was being filmed through gauze: everything seemed wrinkle free but a little blurry, the audience of gay couples, mid-60s couples, and girls nights outers, suddenly looked less glammy and more dull: everybody looked their age except for Cher, she looked as though she had been dubbed in butter: like the t-girl of your dream, like a Cher impersonator in her 20s.

I don’t know how she did that, working out and facelifts uber alles of course, and it was the best body money can buy. “What’s your Granny doing tonight?” the 73 year old icon asked. If only Cher had played it a little straighter, if only she hadn’t followed up the songs with a monologue taking you from nightclubs with Sonny Bono to talk shows with David Letterman to her 40th birthday, for no good reason. She spoke for twenty minutes and then went off for a wardrobe change and the show was completely stalled and she couldn’t get it back where she needed it to be.

I really don’t get it, at all. Not only was the staging antique (take a look at Bad Bunny’s stage last week, with floor to sky LCD screens that shifted in the round, or Mumford And Sons, or Arcade Fire, the stages seem to twirl on their axis and Cher’s stage was older than she is, it just needed to be better), not only was the band a loud session players faux rock and disco bummer, not only was she singing to tracking vocals, and sometimes simply lip synching -a friend of mine who works the TD Gardens claims it was more than sometimes, in a slim 90 minute set she changed costumes eight time, slaughtering any momentum, and as John Duffin noted, undercut her catalog by failing to perform some of her greatest songs, and taking a (you guessed it) costume change so the lead guitarist could take a solo and that solo was THE ENTIRE VERSION OF “BANG BANG”!!!

People may love Cher, I myself love her, but she is not warm and cuddly, once she got her acerbic wit together with Sonny, she became a harsh taskmaster, an angular witch of Eastwick toughie, and so when she performs her audience have to close in on her; Thursday night she was a rap superstar type self immolated mollster. We’re Americans, we want a little coddling, and Cher didn’t provide it. She sang ultra mini, inside the inside of the show, two song sets, before leaving the stage to film (the excerpts from her movie career were specifically enjoyable though not what we paid for), video, dancers, and the band, and doing it all again two songs later.

There are so many Chers on the stage, it makes sense of the dreaded “The Cher Show” on Broadway’s decision to have three actresses portray her (my review here), without actually capturing her essence. Her cool survivors vibe. In her time, Cher spent a lot of it beating back the odds, her earliest hits, both “I Got You, Babe” and “The Beat Goes On,” are forms of protest music, her credentials so solid she no longer mentions that she let Mick Jagger sleep on her floor during the Stones first trip to L.A. Speaking of trips, that tripped from a career derailed, to the strip clubs on the strip and the Sonny And Cher Show and then the Cher Variety Hour, then a tough period of getting her career on track while hanging at “Studio 54,” and a resurrection better than ever with a full scale, Oscar winning movie career.

Yet, she doesn’t quite seem to capture her fabulousness on stage. The audience, who were gagging to adore her, were finding it difficult in a show where she kept disappearing. Perhaps the set worked in Vegas, and it has the feel of a Vegas strip (“Welcome To Burlesque” especially) show: a Cher as near beer, but it isn’t the work of a major pop star doing anything much more than letting her backstory do the work for her. Much of the backstory she took verbatim from Broadway, though if that means fanboying Elvis Presley, I’m fine with that. “Walking In Memphis” is one of the sets few truly great moments, and I’m not a big fan of the song but the”Tell me are you a Christian child?” pause  “And I said “Ma’am, I am tonight” was show stopping.  Her “Fernando” -a highlight of the “Mamma Mia! Here We Go Again” movie, that proved Andy Garcia always had the heat and was a strong match, was spectacular. But it is time to put to bed the duet with a spectral and black and white Sonny,  and otherwise, well, I’ll throw in “Welcome To Burlesque” as well as a goodie, it wasn’t that great and even if it had been, it would have stalled over and over again.

Cher has a great legacy… this show isn’t part of it.