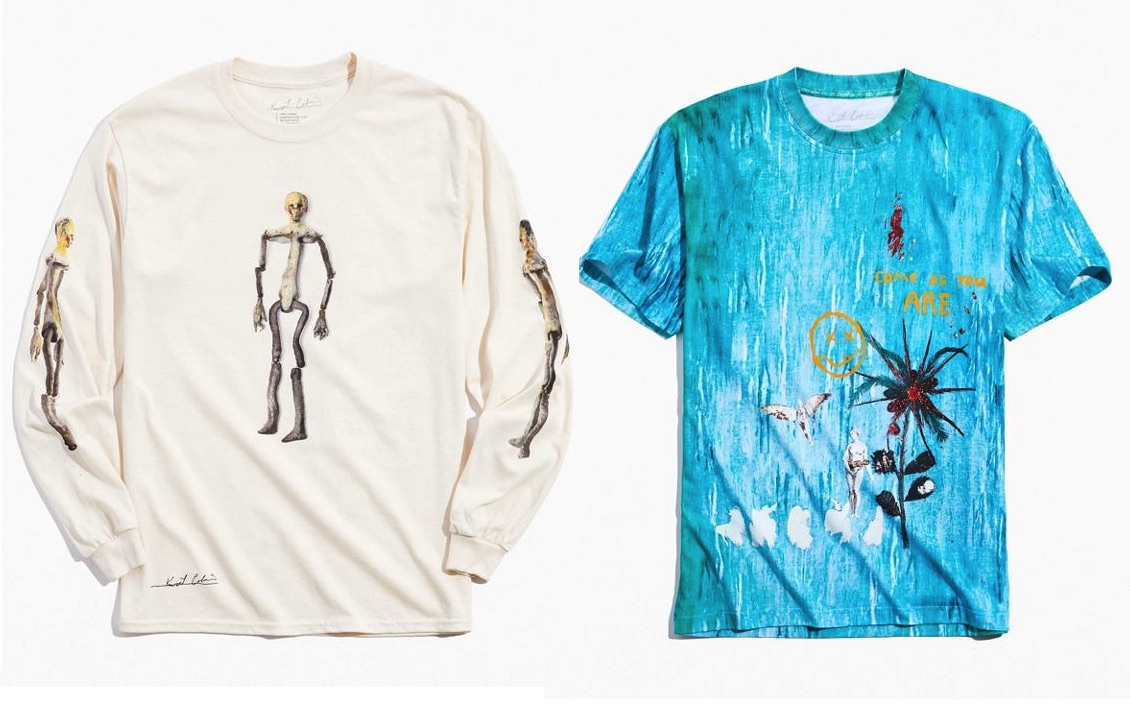 How long will Kurt Cobain’s family exploit his image, how long will they milk the cow? Last October, a New York City pop-up shop started selling Kurt-Cobain-related merchandise curated by his daughter, Frances Bean Cobain: The “Kurt Was Here” collection, which featured t-shirts, hoodies, and a coffee table book with Cobain’s sketches, paintings, and drawings, was on sale online as well at Barneys NY, Selfridges UK and also via ShopNation, Live Nation’s boutique store in Manhattan.

I don’t know how many items were sold but in case you couldn’t buy anything and had deep regrets, the same items are now available at Urban Outfitters, yes that upscaled shopping center ubiquitous store that has successfully marketed hipster clothing to the masses: the short and long-sleeve shirts are priced from $39 to $49, and the coffee table book featuring Cobain’s artwork is $100. Each item was described as ‘designed under the creative direction’ of Frances Bean, who is currently helping manager her father’s business empire.

It’s interesting that Frances is following her mother’s steps in this constant attempt to make money by using Kurt Cobain’s image. Just a few days ago, there was an update on their legal battle against Marc Jacobs as they have failed to reach a settlement. If Jacobs’ ‘Bootleg Redux Grunge’ collection is ripping off Nirvana’s famous smiley face, the famous fashion designer, Frances and Courtney have been friends for decades and Jacobs has basically invented grunge fashion in 1993, along Nirvana’s ascension to success. Despite this long-time friendship, the lawsuit is seeking in excess of $1 million dollars in damages. I should also add that the greedy estate sold Cobain’s famous (and unwashed) MTV Unplugged cardigan for $334,000 a few months ago.

Love and Cobain are after big money no matter what, and now you can buy a piece of Cobain’s art at your favorite hipster store, and thank his daughter and ex-wife. It’s pretty obvious to guess what Kurt Cobain – a man who claimed ‘Rather be dead then cool’– would think about all this if he were still alive.