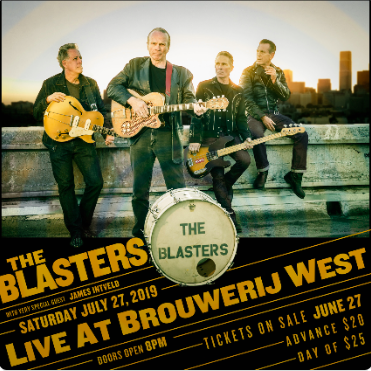 Brouwerij West Presents brings you The Blasters with special guest, James Intveld on July 27th beginning at 8pm. Tickets for this event are available now; $20 In advance, $25 day of show.

THE BLASTERS exemplify the best traditions of American Music, performing with passion and honesty that for over three decades has won the hearts and souls of fans worldwide. Composed of founding members vocalist-guitarist Phil Alvin, drummer Bill Bateman and bassist John Bazz with Keith Wyatt on guitar, they carry on a hard-won legacy as one of the most recognizable and credible bands in American Music. Fronted by Phil Alvin’s powerful vocals, the band follows through with spontaneity, power, and grit that make their live performances into experiences not to be missed. James Intveld is supporting his 3rd solo effort, “Have Faith“, on his independent record label, Molenaart.

The Blasters with James Intveld
@ Brouweij West
Doors are at 8:00pm, Show is All Ages
Tickets Available HERE

Celebrating three years as one of the hottest destinations in L.A’s historic waterfront Brouwerij West features a summer of great music, award-winning beer and local food vendors making it the go-to destination for entertainment and community.  All events will take place inside the wooden WWII-era 8,000 square foot brewery space or within the 17,000 square foot outdoor courtyard space shared with the Crafted Marketplace so that attendees can enjoy the waterfront adjacent beautiful and comfortable space.  Brouwerij West strives to provide a family-friendly environment where family and friends of the community can join together in our “Town Square” environment and enjoy each other’s company along with high quality beer, food and entertainment!

About Brouwerij West:
Brouwerij West is a unique craft brewery and venue located in the San Pedro neighborhood of Los Angeles. Brouwerij West was founded in 2010 and opened its San Pedro brewery in February 2016 in a former Port Warehouse originally built by the U.S. Navy during World War II. Brouwerij West’s operation encompasses 26,000 sq. ft. of the Crafted at the Port of Los Angeles facility, including 8,000 sq. ft. devoted to visitor use for its Tasting Room and events, as well as a 17,000-sq. ft. outdoor courtyard/beer garden. Inspired by the past, Brouwerij West brews its beers using traditional ingredients and methods combined with progressive experimentation to produce its own take on Belgian-Style Ales, Pilsners, IPAs and more. All Brouwerij West beverages are Vegan. Brouwerij West’s new facility is covered with solar panels and generates more electricity than it uses, and its mash filter-based brewery uses 30% less water than traditional breweries.