Nearly everything at Forest Hills Stadium last night was more than apt, it was a warm and sunny day leading to a chill in the air at the upper reaches of the stadium, in the white and Jewish enclave where both the Ramones and Simon And Garfunkel were raised. The milky white audience of 20s and 30s somethings were mostly out for their first return to live concerts, vaccinated and ready to step back into their lives by watching the forty something indie folk rockers.

Opening were Lucy Dacus in a long black skirt followed by Waxahatchee in a long white skirt. They looked like rejects from the Lilith Fair but they sounded 2021, Lucy with a full band and her finely crafted indie folk which seemed to stitch two versions, one a folk solo and the other a blast of electric energy from the full band, on song after song; including two highlights of the entire evening, “Hot And Heavy” and “Nightshift”. Her set was truncated to five songs so we they could shoo-in Waxahatchee, with a ten song set, including a Haim cover. but despite a full band, the “Lilacs” composer has no way to change up her sound and it killed her streaming performance earlier this year (here) and while it was better in person, it was still a bore…. but we did get “Lilacs”.

For me, Forest Hills Stadium is an easy go to, twenty minutes by subway from my home, a strict 10pm curfew, set times often posted, and, if you choose, you can go to the last row and point your cell phone south and capture this: 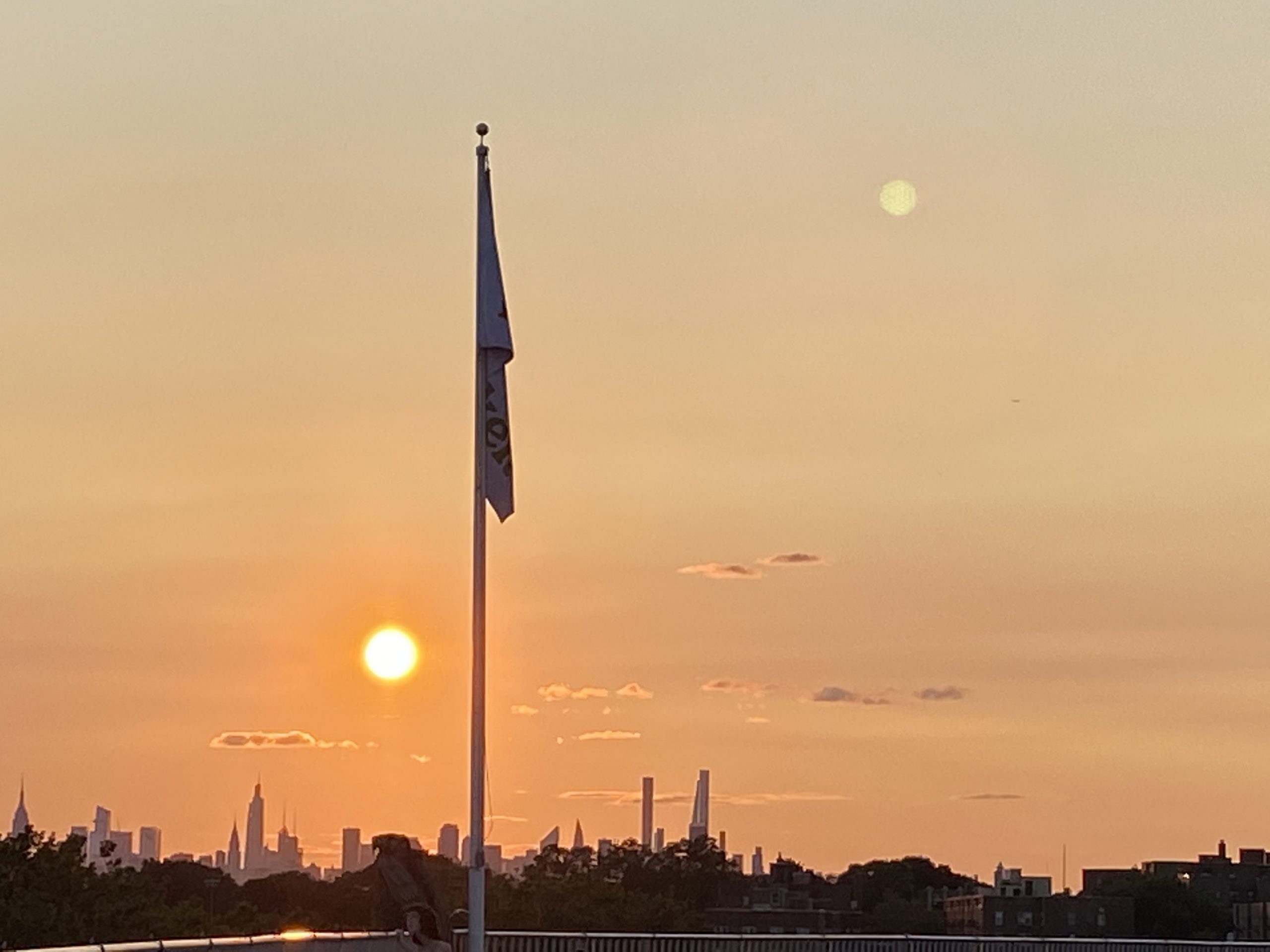 The evening was meant to start at 6pm and started at 545pm instead, and by the time Conor Oberst, the now 41 year old, former boy wonder divorcee reached the stage, the sun was setting and the band had just covered Christopher Cross’ “Arthur’s Theme” (you know: “If you get caught between the moon and New York City the best that you can do Is fall in love”) a tantalizing you are here titbit and then a great, obstreperous segue to… “Dance And Sing”. With a string orchestrate and two of the best multi-instrumentalists around in Bright Eyes buddies, the Jack Antonoff’s of the 00s Mike Mogis, and the utility man of indie rock Nate Wolcott, the band sounds exceptional and Conor teared his lungs out with his timorous, overblown, heart on his sleeve, Dylan like lyrics. But “Dance And Sing”? The setlist was a horror. I could write them a better setlist in my sleep.

Stuck with a one year old dog album to pound us over the head with, 2020’s Down in the Weeds, Where the World Once Was, the 20 song setlist renovated four songs off the dog with fleas that, as Conor noted in a dust on my shoulder moment, stiffed, also four from The People’s Key and, yes, four from my best album of the 00s, I’m Wide Awake, It’s Morning but not the four I still listen to. Twenty songs, and only “Another Travelling Song,” “Jejune Stars,” and (from the latest, true) “Mariana Trench” hit the sweet spot. Otherwise we get Bright Eyes at their most moribund, oldies like “Neely O’Hara” and “No One Would Riot For Less”. He could have given us “Hot Knives” or “I Must Belong Somewhere” from Cassadaga but no, “Riot For Less” we get. Over and over again, Oberst heads straight for the most stringent and least appealing moments in his catalog. “Ladder Song” AND “Comet Song”. Geez, when I saw him back in the day “Lua” was his closer, why this? What is he thinking?

Well, he seems to be growing into a grumpy old man for one thing, calling people (“not you guys”) stupid and dressed like a scruffy, unkempt mess with his looks fading fast and an attitude that finds him talking though it comes out as a mumble, he has become Popeye.

This isn’t the worst I’ve seen Conor, that solo set at Summerstage a coupla years ago was the pits, but it is the worst I’ve seen Bright Eyes. Ten years after a bummer set at Radio City Music Hall (and nearly fifteen years after the Town Hall residency), all Bright Eyes needs is me to edit their setlist and they would kill. They sound great but they can’t choose their songs with any sense of who their audience really is.