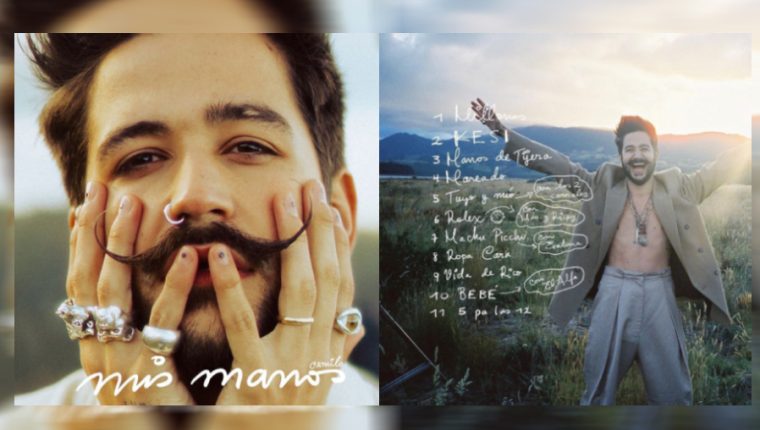 How Did We Get Here? – Blu DeTiger – it took me a while to heavy up on her bass placed, analog sounding, r&b style, but the second time round it reveals itself as a sweet and smart soul from the former sesion player – B+

Your Life is a Record (Deluxe Edition) – Brandy Clark – adds six songs to the snooze alt country gal, one is with Brandi Carlile, the other with Lindsey Buckingham. Sadly, they both are nothing special – C+

Mis Manos – Camilo – an outrageously gifted pop star from Colombia, song for song nothing beats it this week. Camilo is off center always: tunes, sounds (sometimes he sounds like Paul Simon circa Graceland), “KESI” is a great song that’s all – ALBUM OF THE WEEK – A

Made In The Pyrex (Bonus Track) – Digga D – London trap so you know the drill (haha), pretty good – B

The Golden Hour – Jaz Elise – smooth jazz with hip hop production, like the 80s meets the 90s meets today – B-

Mariposa de Barrio (Soundtrack De La Serie) – Jenni Rivera – in Latin pop terms, Jenni was the Patsy Cline of the genre in the best ways and also in the worst way: she died at the age 43 in a plane crash. This functions as a primer and is beyond worth your while. If you listen to Mexican music it is part of knowing the sound – A

These 13 – Jimbo Mathus, Andrew Bird – Andrew Bird has always left me cold, but this album on modern folk, featuring the excellent Jimbo formerly of Squirrel Nut Zippers for a collection of indie folk Americana in two part harmony – B

Reset – Kaskade – the popular trance band sound like a modified snooze MOR, if they sped it up and dumped the singer they would be deep house – C

The N.O.W. Experience – Kelontae Gavin – minor league Gospel newbie with the power of his convictions and that’s about it – C

Choices – Lucy Spraggan – UK singer songwriter details her divorce and sounds the better for it, try “Sober” – B

Retumban2 – Ovi – the Cuban native has that Bad Bunny neon lit look and a reggaeton at home with trap sound, a little been there done that but it is of this minute for sure – B

Heaven and Holy – Painted Shrines – The Woods singer channels his band’s earliest work, on a quietly lovely indie pop well worth it – B+

Change of Scenery II – Quinn XCII – one of the Variance crowd of sadboy singer songwriter plus, Jeremy Zucker is here, on an album that is alright without being the slightest bit arresting five years after his last – C

PEACEMEAL – Ron Gallo – not unpleasant and also not pleasant singer songwriter complete strangeness, it is like art confessional without the confessions – B-

DND – Teyana Taylor – an EP compilation with featured guest from Missy Elliot to Chris Brown… and one of her very best songs, the Kanye West featured “Hurry” is here – A-

Country Again (Side A) – Thomas Rhett – He will never write another song as great as “Don’t Threaten Me with A Good Time,” and none of these three are, but they are fair enough and ordinary, country rock – B-

I Won’t Care How You Remember Me – Tigers Jaw – the band dubbed themselves the middle ground between Fleetwood Mac and Saves The Day, which means they know from a melody but not from asong construction. Even so, indie pop lovers are gonna love it and everyone else is gonna like it a lot – B+

PLAYBOY – Tory Lanez – Tory is the Canadian guy who is in extremely hot water for shooting Megan Thee Stallion in the leg… you can’t make this stuff up. Here is a mainstream r&b hip hop album sex guy that falls asleep on you early, if only he had more songs as good as “And This Is Just The Intro” – C+

Boogie: Original Motion Picture Soundtrack – Various Artists – Pop Smoke fans, three new songs and a remix from the soundtrack to his first and also his final performance in a movie – B

Coming 2 America (Amazon Original Motion Picture Soundtrack) – Various Artists – In preparation for 2 I went back to watch 1 and couldn’t finish it, the album has its moments though the title track makes you more than miss James Brown – C

The SpongeBob Movie: Sponge On The Run (Original Motion Picture Soundtrack) – Various Artists – I saw the Broadway musical back in the day and wasn’t convinced and I am halfway through the movie and am a little cool to it, but Snoop Dogg was fun and his rap was pretty darn swell, and Tainy’s Latin Trap alone is worth the price of admission (though Kenny G ain’t!) – C+

My Head is a Moshpit – Verzache – The bedroom pop guy’s debut album is a nineteen song string of same sounding pop confessional, if he had cut to five he’d have a much better collection – C+

Human Work – Worn – have you ever been to Wilkes Barre? I went to a wedding there decades ago and it is the only US city I’ve been to that has tombstones on the sidewalks, and, of course, a legitimate hub for screamo. On their debut, worn are the best Svreamo I’ve heard all year, the singer’s voice is an echoey foghorn and the drummer a power tool – B+