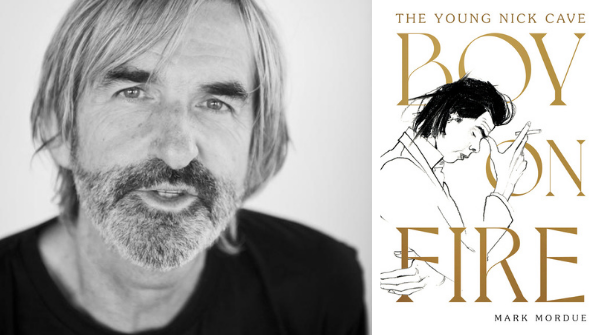 ‘Boy on Fire,’ the new book by award-winning Australian journalist and writer Mark Mordue is a labor of love and dedication, it explores all the big questions about creativity and art with one of the most iconic Australian artists at the center of the book: Nick Cave. Two days ago, Mark was discussing his book from an Australian bookstore, during a zoom conference and he admitted it took him 10 years to write this 401-page volume that focuses very much on the young Nick Cave and the Australian aspect of his career, putting some light on how his native country shaped the man he became.

The book, whose title refers to the numerous allusions to fire in Nick Cave’s work (‘I’m on Fire,’ ‘Fire Boy,’…) goes into details in the life of young Cave, growing up in Wangaratta – a very small town of 14,000 inhabitants at the time – then moving into Melbourne as a young man, while it explores Cave’s friendships, musical collaborations, and influences along the way. But mostly, the book asks the big questions: Why an artist becomes an iconic performer, a larger-than-life persona attracting all the attention while other talented ones never make it? What is talent and how does it translate into art that resonates with plenty of people?

Mark Mordue regards Nick Cave as the major Australian artist he is, ‘I really put him on the same sort of global footing as Brett Whiteley, Tracey Emin, and poets like Allen Ginsberg,… these people who are iconic even if you don’t actually like them.’…‘But he is not just a rock and roll singer,’ he adds, ‘he has written books, scripts, he’s done incredible film soundtracks, he has a vast repertoire.’ Furthermore, Cave obviously transcends his native country, Nick is not only a versatile artist, but he is an international artist, and nothing illustrates this more fully than the arena world tour that was scheduled for 2020-2021 and has just been canceled. As a fellow Australian, Mark Mordue regards Nick Cave as someone part of a bigger story, someone very much part of the Australian history, who then moved, grew and became successful, becoming relevant to a wider culture. ‘It’s really important because it’s about growing up in Australia,’ Mark says. ‘I think that’s where the interest lies, it’s not just about Nick, it’s about us,’ Mark adds while insisting that his book is a socio-biography project. This biography is about all of us, it’s about how we are shaped by our environment and how we influence the things we consume and enjoy. There is a mythical shadow over Cave’s childhood, the Australian part of Nick’s identity had not been very well mapped before, even though it is key to the famous artist, and this is what Mark Mordue is after.

While researching ‘Boy on Fire’, Mark Mordue talked many times to Nick Cave. ‘This is really fortunate that the book took place over a long period of time, I had many conversations with Nick,’ he said. But he also developed an exceptionally close relationship with Dawn Cave, Nick’s mother, whom no one had ever spoken to before. ‘Dawn is just a beautiful woman really friendly very intelligent, very humorous, very witty,’ he said while explaining he would often land at her place for tea, sandwiches, and biscuits while having a conversation about TS Eliot. ‘It was like having a second mom.’ Unfortunately, Dawn passed away on September 15th at the age of 93, before the publication of the book.

Cave’s Australian story starts in Warracknabeal, an even smaller town than Wangaratta, and the young boy was soon saturated by literature thanks to his mother Dawn, a librarian, and his father Colin, an English teacher and amateur historian. Colin Cave wrote about Ned Kelly, a famous Australian bushranger, outlaw, gang leader, and, as an art lover, was fascinated by Sidney Nolan’s paintings of Ned Kelly. Very early on, the Cave family and the Ned Kelly myth are deeply interwoven. According to Mark, you can find shadows, echoes, and allusion of the Wangaratta landscape in Nick’s work, while his literary influences allowed him to explore the darkness.

Later on, many musical influences can be added to the literature: Johnny Cash who ended covering ‘The Mercy Seat,’ 3 years before he died, Leonard Cohen, Jimi Hendrix, John Lennon and the Plastic Ono Band, and David Bowie.

‘It was definitely on my agenda to write a portrait of an Australian artist and it matters to Nick a lot that is recognized as an Australian artist,’ Mark said. These days, Nick even regrets he didn’t set his 1989 book ‘And the Ass Saw the Angel,‘ in Australia. The characters have a certain Australian dryness and a weird sense of humor, but it was written in a sort of Southern American gothic style and transposed into the southern part of America with the language of Flannery O’Connor or William Faulkner. ‘But it was much more intimate than that,’ Mark adds, ‘the mythology is a place to hide in, now I feel like he is back to being Australian.’

From the Boys Next Door in Australia (Cave’s first band that performed with youthful energy) to the confrontational Birthday Party in the UK, to the Bad Seeds, primarily established in Berlin and then across the rest of the world, Nick Cave expanded his artistic vision. He evolved from a rebellious country boy to a darker and more intense space, like a nuclear explosion ready to occur, while packing plenty of influences along the way. ‘Now it’s all about the relationship with his audience,’ Mark said, and everyone who has attended a recent Bad Seeds concert will agree.

Because the character he plays on stage is so convincing, it is difficult to make the difference between the real Nick Cave and the mythical Nick Cave. He has always had a hand in creating the Nick Cave myth and his identity comes out of his performances with the Birthday Party or the Bad Seeds: a prince of darkness hammering rock & roll and parading his demons. However, he married Susie Bick in 97 and became the father to two sons, the second time around (he has two older sons from two different women). ‘He changed very much through his marriage with Susie,’ Mark said. ‘Being a father changes you and it doesn’t necessarily stop you, it can intensify you, but you get a different kind of intensity out of it.’ Mark insisted that Nick is a very good, attentive, and caring father, while his decency and kindness have recently manifested themselves through the answers to his fans in the Red Hand Files. Aggression may have been the first mask of his youth, while some Buddhist-like compassion exudes through the Red Hand Files. ‘All of that is real,’ Mark says, ‘but it’s also a sort of defense as well.’

From musician to performer and now entertainer, Nick Cave is very comfortable with that evolution, if he expresses the best and the worst of himself through the characters created for his songs, if he explores the shadows and the darkness, his performances work like exorcisms.

Nick is also a ‘polarizing artist,’ Mark explains, his novel-worth characters on stage can emanate a sort of disturbed and dark masculine energy, and ‘because of the current nervousness around volatile material, it’s easier to not go there,’ Mark adds. ‘But we need this exploration to occur that is the kind of horror playground of the subconscious through which we face a whole lot of things that are otherwise not dealt with.’ Nick Cave is going where very few artists dare to go these days, and he has often expressed his opinion about cancel culture.

For Mark, Nick Cave’s greatness is also visible through his appropriation of already-existing material while making it his own. The song ‘Stagger Lee’ could be the best example, an old song with hundreds of versions, that has become an iconic Nick Cave song

Friendship has always been a conflicted thing for Nick Cave, his relationship with other musicians has been sometimes competitive, sometimes deceiving, as he has just dumped people. ‘Artists will use everything around as a resource,’ Mark says, ‘and this can be problematic, painful, or thrilling. Nick works with people then he moves on. He a very charming, intelligent and talented person, so he is someone that you like, and you like the communication, but he has a bigger vision, and he has a place to go, he’s on a journey and whatever part of the journey that you share with him, I think you can count yourself lucky,’ Mark adds.

If Nick keeps moving and pressing forward all the time, his collaborative relationships with Mick Harvey and Warren Ellis have been very important in his career, and Mark sees these two collaborations in a very distinctive manner. ‘With Mick Harvey, Nick had a sense of mythical places and mythical characterizations and then with Warren Ellis, he moved into this more amorphous and starry, and yet also sinister place that it is much more within his being,’ Mark says. His incredible last album, ‘Ghosteen,’ written after Arthur’s death, is the perfect illustration of this exploration of an internal landscape. There are still fragments of the outside world like the rain in a street, but we really inhabit Cave’s internal world and consciousness rather than being in a mythical place.

‘Ghosteeen,’ that Mark considers an absolute masterpiece and a magnificent work, can obviously be regarded as a ‘reconciliation with losses,’ while Nick became ‘very good at learning to live with the dead’ – his father died when it was 19 and his son died 5 years ago. The songs ‘hold some part of the person, some energy,’ Mark adds.

Because of his meticulous research ‘Boy on Fire’ had a very long gestation, and something extraordinary happened 5 years ago. After talking to Nick for years (the two men met in 1995) and after working on the project for a while, the tragic and sudden death of Arthur occurred in 2015. The dramatic change in Nick Cave’s life after this life-altering event was undeniable and he told Mark that there was a before and an after Arthur’s death and that everything he had said to him before was now irrelevant. But this didn’t destabilize Mark who still says he had a bigger vision in mind than just a portrait of Nick.

‘I was never Nick’s servant, but I was never his assassin either,’ Mark says. ‘I wanted to do something more complex and bigger than just a single portrait adoration about him. it was really about the world, about Wangaratta, about Melbourne in the ’70s, about Australian culture; it was about the birth of an artist,’ he adds while admitting he has been approached by someone for a possible biopic. ‘I felt that the book was very kind of cinematic,’ he adds, probably feeling in complete harmony with the subject of his book who has declared: ‘I can’t write a song that I can’t see.’