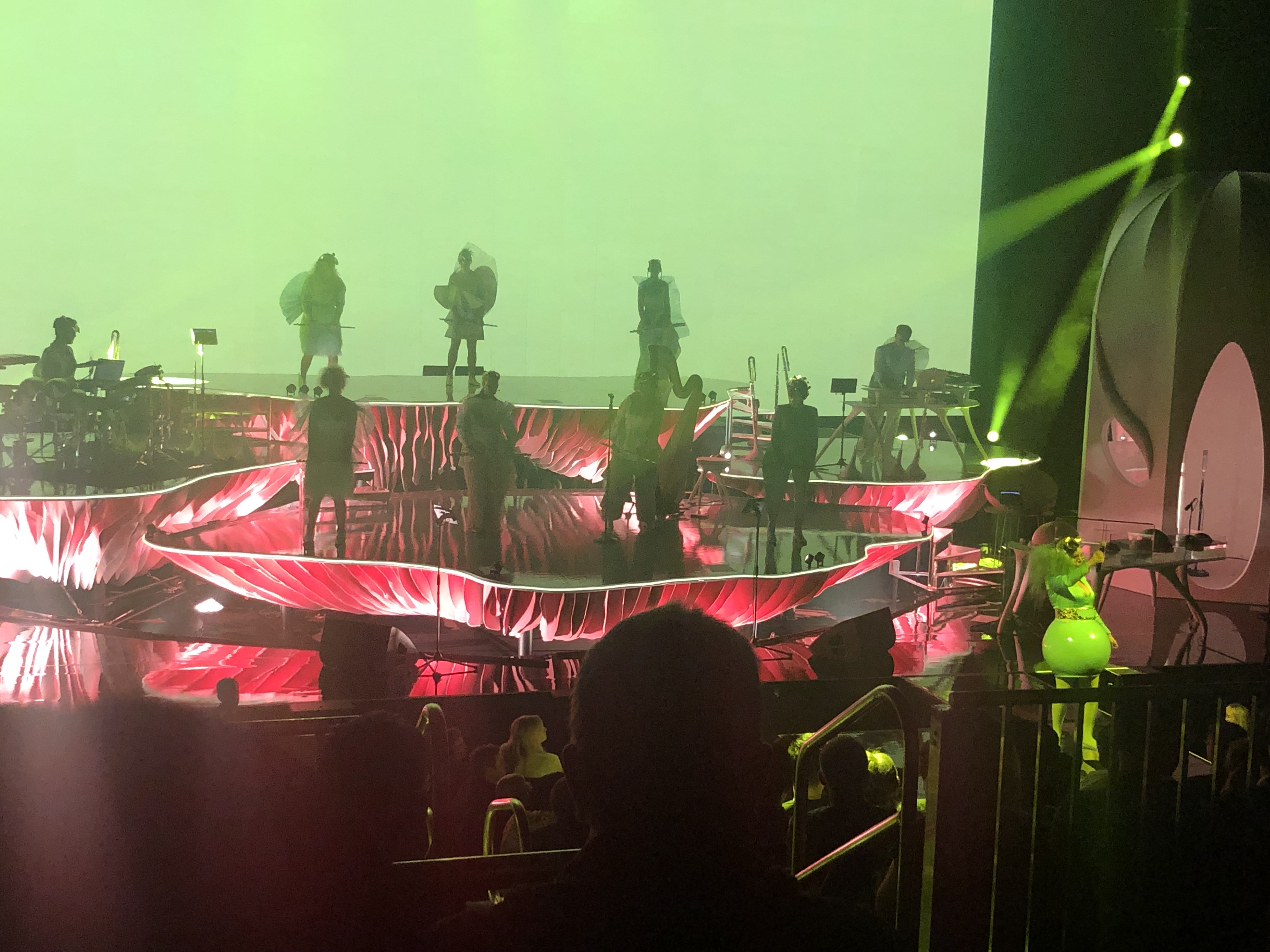 Last year Björk toured Europe in support of her album Utopia, today she expanded the concept of the album into a thrilling, astonishingly beautiful musical and visual illustration of a world where people and nature cross pollinate in matriarchal society. Imagine “Avatar” as a plant based human mash up.

To call the staging stunning is an understatement, it is like reality overlaid on to virtual reality and the sound, a 50 member choir sang for the first twenty minutes of glorious harmony veering between chorale and Björkrale, and the main instrument all night was the flute, making real a world of sound like no other.

The last time we saw Björk here, in 2015, she was performing the superior to just about everything heartbroken Vulnicura, but visually “Cornucopia” can’t be improved upon right this minute. In glowing pinks and greens and musicians decked as a new hybrid humans, it is all flutes, fauns and fauna and Bjork MCs the proceedings in an eggshell bottom and a mask that covers her nose. The sound emerges from everywhere, sometimes from behind you, the drums sometimes thunder like rain,sometimes, as in the introduction to “Blissing Me,” water being poured is another effect. “Blissing Me” featured an appearance by serpentwithfeet and was a soulful sidetrack and an evening highlight. So was a stunning “Isobel” and a surprise “Venus As A Boy”. The music was arranged so as to sound it was coming from someplace else entirely, and the effect was as much Edenic as Utopian. Utopian suggest a political place, but “Cornucopia” exists in world without politics: it is, in many ways, a place of the mind as well as the spirit, and, like “Biophilia” it is about NATURE AND TECHNOLOGY, only the technology is what you are seeing and hearing. Björk: “often, in all things theatrical, they are made to look good and then later fixed to sound good. but i wanted to try to start from what sounds good and collaborated with an acoustician on a reverb chamber which will be on stage . and it was so inspiring when the shapes started appearing, even though they were miniatures compared to temples and cathedrals, they aligned with the aesthetic language that sound inspires.”

I can’t say if Bjork’s voice sounded warmer or clearer because of the reverb chamber. I can say it sounded warm and clear and confident enough to be joined by the 50 members of the Hamrahlið Choir and the  Vibra Flute Septet.

So musically, it wasn’t as good as Vulnicura but that doesn’t make it less than great. Visually, though it slows down a little towards the middle and becomes closer to a normal concert, I have still seen nothing like it before.

I will probably write  a full review in a couple of days, for now, it is the best show in town.