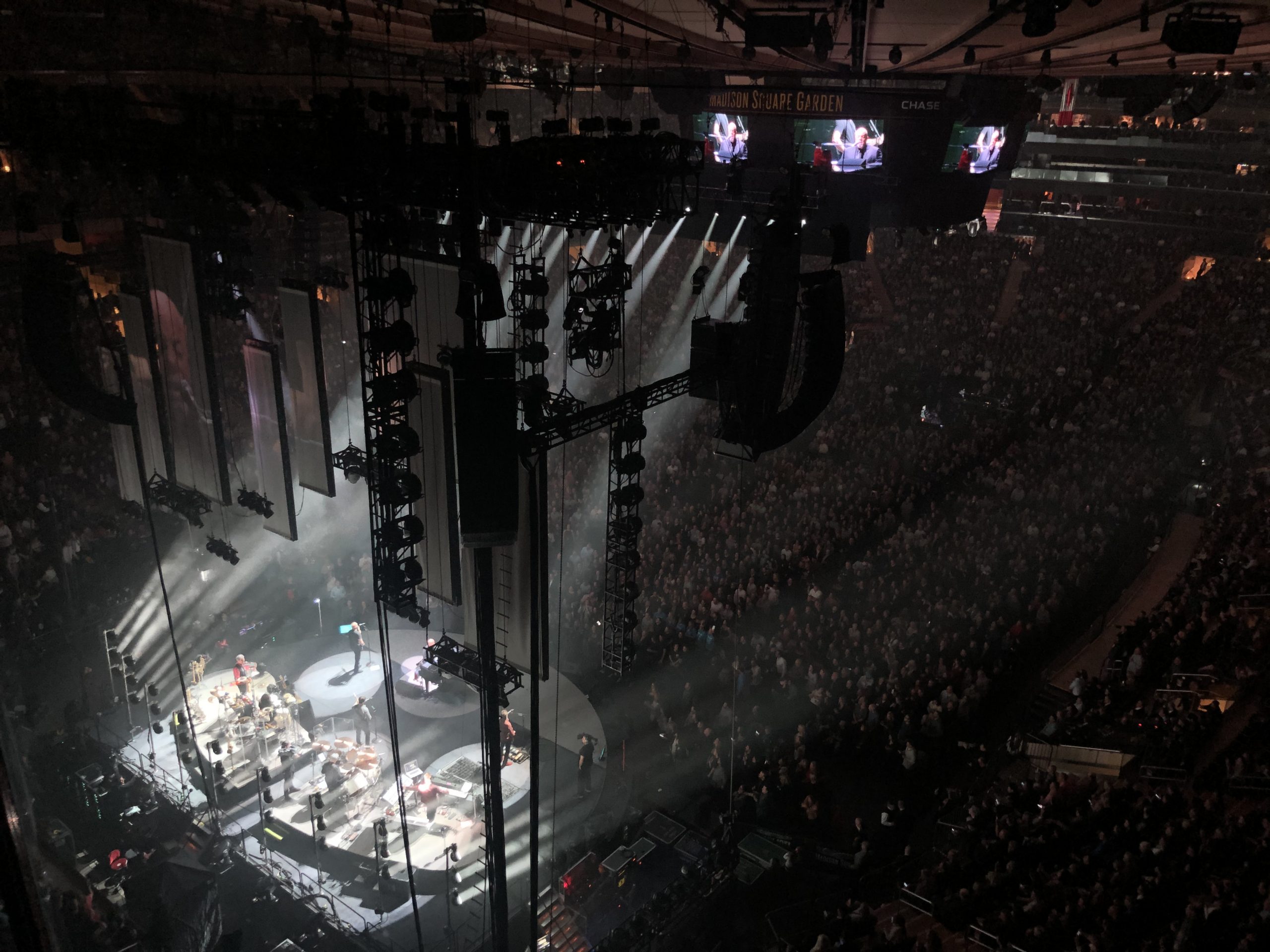 The 71st night, sixth year in January 2020, of Billy Joel’s Madison Square Garden residency, last night’s Christmas show, finds the entertainer having the set down to a fine art. Over the years he has tweaked it relentlessly, back in 2014 Billy had an opening act (the excellent Jamie Cullum), in 2016 he interspersed other songs (“Take me Out To The Ballgame” , and a ton of Elvis ‘thankyouverymuch’ Presley) into his own songs and in May performed the best set I’ve ever seen him do.  By 2017 he had gone too far in the one song versus another audience choice (hint: anything against “Vienna”? “Vienna” wins), in 2018 he became too chatty, and yesterday, like Goldilocks And The Three Bears, he had the evening just about right. Billy’s on stage patter is a little too curated, he doesn’t have the effortless segueing he had four years ago, and on a certain level, if you attend regularly, it is too obvious. But, as my friend Britt Slocum noted, He makes the garden quite intimate. It makes up for everything by making the 20K Madison Square Garden  his living room.

Six years in and you know what you’re getting, having not released a new album in 25 years, of course you do. A mix of hits and fan fave album tracks, this isn’t for the true believers but the legions of folks who want what they want. And Billy delivers, from the two song behemoth that ends the set proper, “Piano Man” and “Scenes from An Italian Restaurant,”  and followed by the encore, “We Didn’t Start the Fire,” “Uptown Girl,” an ode to his cultural irrelevance,  “It’s Still Rock and Roll to Me,” “Big Shot,” and “You May Be Right”.  “Miami 2017 (Seen the Lights Go Out on Broadway)”, which he was still opening with in mid-2018, has gone the way of all flesh, but the sometime replacement “I Go To Extremes” is a goodie. The heart of the set is what you expect it to be: “Movin’ Out,” “She’s Always A Woman,” and “New York State Of Mind” and I got two personal faves, “River Of Dreams” and “The Longest Time,” last night.If he had included “And So It Goes” it’d beamong the best sets to date. Billy  brought out his daughter for the Christmas portion which, paling in comparison to the December 2016 performance of Christmas Carols breaking out all night long, had Alexa Joel covering “Have Yourself a Merry Little Christmas,” and “White Christmas,” both taken a touch too fast though her whispered “I love you, daddy” made up for a somewhat perfunctory take on both. Daddy himself was a little on the quiet side, one year he told us how the suits at Columbia tried to convince the Jewish kid from Long Island to record a Christmas album, much to Joel’s bemusement, last night not so much. But he did claim that “She’s Right On Time” was the closest he had come to Christmas song (for the “Turn on all the Christmas lights cause baby’s coming home tonight” no doubt)..

If you haven’t seen Billy before, the show would have knocked your socks off. The level of professionalism is through the roof, Billy is like a zen master of his catalog, he dips in and out effortless, his knowledge of material, his and that of everybody else, makes his move from song to song like thought to thought, it is a form of musical levitation. And while, having seen him seven times during the residency, I am at the point of diminishing returns, the version of “The Longest Time” is certainly as good as the original,  it pays homage to doo wop with a full hand of back up singers, and a woman brought in just for that. It was irresistible, as the entire audience stole the “woohs wooh” from him, Billy snapped his fingers in a sharp, syncopated, just about flawless rendition. It was worth the entire night… and like the man himself, I’ve been a fool for lesser things.