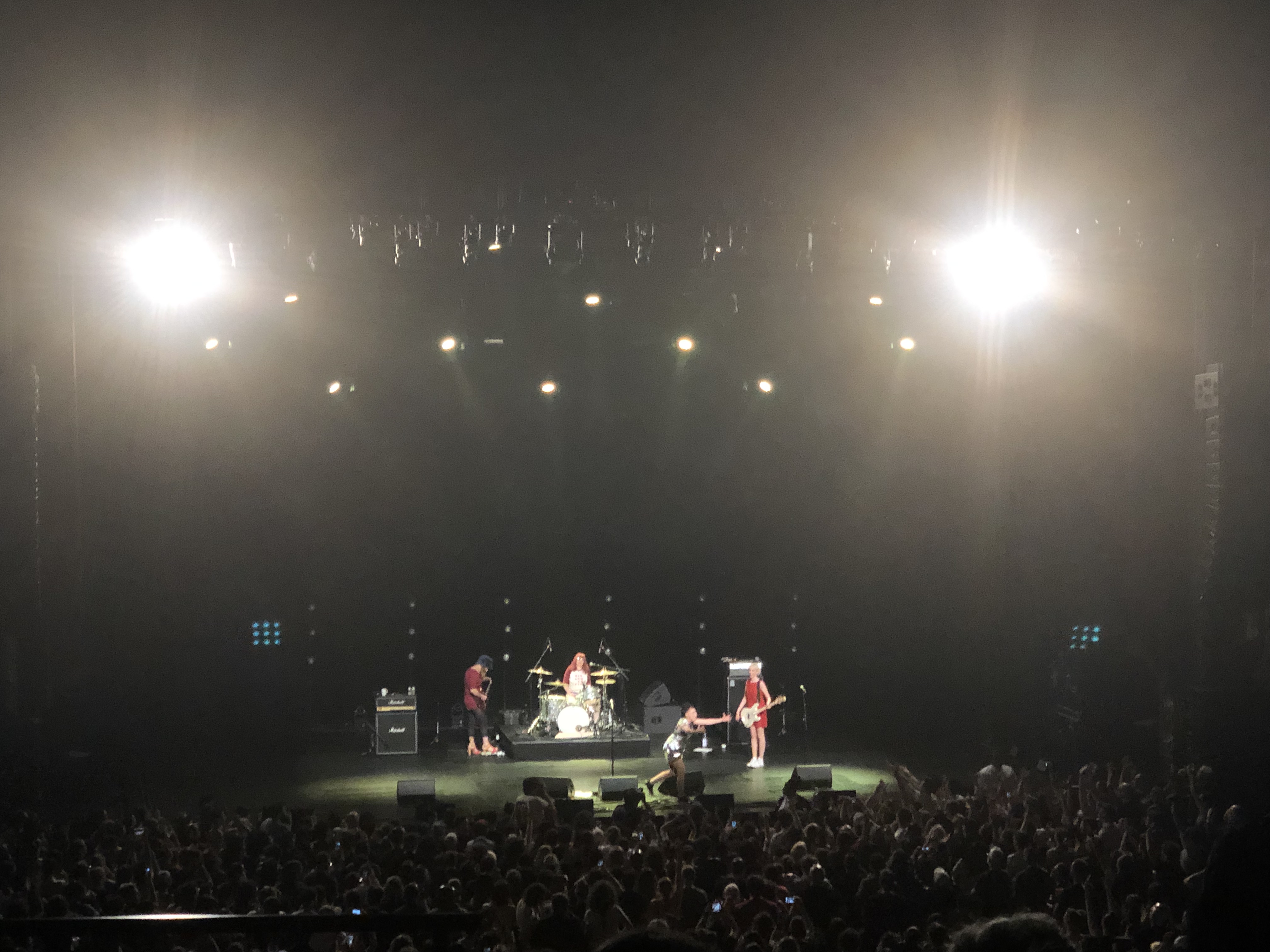 Overrated…. I mean, maybe there is no way to rate Bikini Kill accurately unless you are built into the demo, but overrated. Bikini Kill remains the same,  missing the  beat they have always missed: with exceptions, they compose punky, riff singalongs and not tunes. You remember tunes, right? Their peers Joan Jett and Sleater-Kinney sure do.

On the final night, of a  two night residency at Kings Theatre, and four nights in the Apple, Kathleen seemed not quite up to the job; there is something iffy about a 50 year old woman discussing reading feminist literature and adding lyriics to a song, it is a distancing effect, too received. And it has hampered Hanna since forever, coming out of the same place, at the same time, as Kurt and Courtney, Bikini Kill were about as lesbian as, say Ani DiFranco, and about as punk as Hole.

Quarter of a century later, the band reformed to hosannas from a generation of women, and the following generation of girls, as a sign post to a world that seems a little closer today. But then, compared to, say Sleater-Kinney, they had neither the material nor the chops, and last night at Kings Theatre, Bikini Kill were just about the same. You approach elder statesperson Kathleen with a certain wariness: her whiny bratness might be the point, but it is still a whiny brat point. The 90 minute set would have been faster paced without tech problems, and without Kathleen’s faux-cool personal taking on a past  where she finds herself, as always, the straight set up person for lesbians… The question is, where was the King Princess of 1990? Sleater were still four years away. But if you listen to SK, if you follow Call The Doctor with  Dig Me Out, people are comparing you with the Clash, if you follow Pussy Whipped with Reject All Americans, Bratmobile are being compared to you.

On stage, the band are tight and sloppy, sharing instruments, and lead vocals. Toby Vail is a terrific lead singer -so is Kathleen, guitarist Erica Dawn Lyle is a real presence (maybe because she’s so tall), and like all the best bands, their bassist Kathi Wilcox is killer. More positive, Kathleen can bray, but she can also tell a story, a very funny one about a Dyke March where an oblivious Joan Jett was followed by 100 dykes into a bodega was worth its weight in gold. And while I never thought the riot grrrls were all that great at pop feminism (if they wanna change the world, hand a copy of “The Second Sex” to every audience member), I get that I am not one to really lecture about feminism, and I get the world of women in rock, though highly developed since the 1950s and 1960s, was still a stacked deck.  I never thought anything the riot grrrls were doing was quite good enough. Personally, I considered Carebears On Fire a better band than Huggy Bear, or Brat Mobile, or Bikini Kill for that matter. BK have great moments from early “Rebel Girl” (their only great tune) through “Capri Pants” to “This Is Not A Test” to the magically named “Suck My Left One” -all great songs, all performed last night… as for the rest… I was in mid-Mezz and nobody was standing. These are heroes returning to conquer, and not doing so.

They made too many mistakes. For one, opening band Gauche are a good, young post-punk quasi-riot grrrl band, but they are certainly not Le Butcherette or Alice Bag, both of whom opened in LA. For another, the break between sets was too long, and  since all the band had too do was set up their instruments (no backing tapes to synch, absolutely no close circuit TV to bring in the nosebleeds) it should have taken fifteen minutes tops, and finally, the material isn’t strong enough to carry the band even if, in theory at least, the band are strong enough to carry the band. It reminds me a little of Kathleen’s husbands late band the Beastie Boys, who were consistently shitty on stage. Bikini Kill is thrilling if what you want is to sink into that vibe, if you were a riot grrrl, or if you came in late and never saw them, just having BK in front of you is a thrill: these Susan B Anthony’s of punk deserve accolades for what they did and have done. But they don’t deserve to be lied about. The thing about punk, the thing about The Au Pairs or Y Pants or the Raincoats (all of whom I saw live at the time), is that they lived and died with the songs: whatever else rock against sexism might have been, it was first about great music, and given their position, Bikini Kill don’t have the material.

As an MC, Kathleen is energetic and smart, she seems a bit of a wiseass (“I’m not your teacher” she snapped at an audience member), she moves very well and is self-deprecating to a degree, as the center of attention she speaks well but this is the USA, we want a little coddling, instead we get a sense that we aren’t  much. And as the center of attention, it is Kathleen’s fault the band are dull. The songs aren’t strong enough, you can’t see much, the audience was actually quite quiet, and while the band was tight and sharp, they weren’t great.

So fine, they were good not great, so what?

So why is everybody saying they are great when they clearly aren’t? Suck my left one, indeed.