Big Thief Are Apologizing For Their Shirt… For Nothing 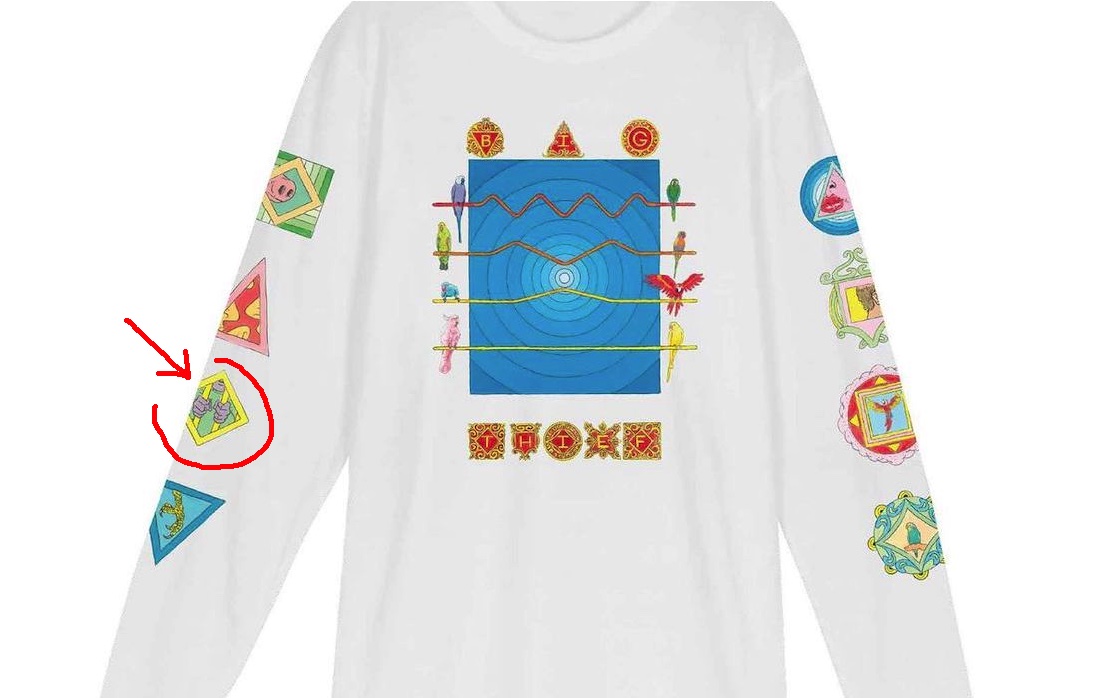 Big Thief are apologizing for this shirt

There are obviously much more important things happening in the world, this is actually such a non-story that this should not have been the subject of all these articles. However, everyone, from Brooklyn Vegan to Stereogum has mentioned it! This non-sense started after Big Thief posted the following apologies on their Instagram page:

‘Today, we want to take a moment to address something that has been brought to our attention. One of our t-shirts (multi-colored with parrots and sound waves on the front and many small images down the long sleeves) includes an illustration of cartoon purple arms and hands holding onto jail cell bars. We feel that this is reckless, offensive imagery. The jail cell was meant to be a metaphor symbolizing imprisonment and oppression of the mind and spirit because of constructs, etc… The arms were intended to be purple so as to avoid realism and race all together but we feel that that thinking was misdirected. We believe that something as pervasive, horrific and insidious as incarceration can not be lightly approached and most especially in avoidance of the issue of race, as the entire incarceration system is fueled by racism. The lack of attention we paid to this symbolism, to us, is a reason to bring it up. Letting this image get printed on a shirt is just another example of a symptom of being conditioned in a culture of normalized white supremacy and we apologize to anyone who may have felt hurt or uncomfortable with this image.

Our band t-shirt isn’t the main point here – Rather it is a piece of a much larger, much more important conversation which we have been having that considers all of the ways in which we have been steeped in and benefiting from a patriarchal white supremacist capitalist culture – about how the music industry which serves as the vehicle for our art getting into the world functions much the same as any other industry – and how we as a band of people who are white, benefit from a system that was built unfairly.

Going forward we will be allocating a portion of the money we make from all of our masters and publishing into causes that we feel will help start to address these injustices, starting with initially giving to the Equal Justice Initiative. On the touring side of things, we will be donating a portion of our earnings towards environmental justice and the climate emergency.

We are limited by our perspectives, and much of the time we have been able to move along in relatively peaceful, uninterrupted ignorance of how BIPOC communities and individuals are affected by the systems in place. As a queer woman, Adrianne has been passionate about dissolving and ripping apart the misogynistic, homophobic constructs that have worked to oppress her in the world, but we see clearly that it is not enough to address only the things that affect one of us, or even to simply express empathy for that which affects “others” (and this otherization in general may be the most dangerous of all pitfalls, fertilizing the thought pattern that one can live in avoidance of pain or discomfort or prejudice so long as we are not the direct recipient of it).

Almost everything that we as a band address in our songs has to do with internal and external healing of the wounded spirit body and the wounded earth body in some form. If there is suffering, it permeates, and those who feel unaffected by it are cutoff from true vitality. If music is to be a unifying force, which we have always believed it can be, then as a band we need to better acknowledge and recognize the stark differences in experience that people face. We are committed to facing up to our own conditioning and internalized racism.

We continue to be committed to the work of repatterning and reconditioning ourselves to being actively anti-racist and an ally to communities and individuals affected by oppression and, in turn, to ensure that energy is what encompasses every aspect of the physical and virtual spaces that envelop the culture we are co-creating with our audience.’

I had never seen the shirt and after such a lengthy statement I truly expected something different from the photo above? Are you kidding me, Big Thief are apologizing for this tiny cartoon on the sleeve? Have we reached this point of wokeness? And not only Big Thief took the time to address this non-polemic at length on their social media, calling it a ‘reckless, offensive imagery,’ and ‘a symptom of being conditioned in a culture of normalized white supremacy,’ but they have removed the shirt from their online store and they are planning to give a portion of their money to the Equal Justice Initiative and other causes. Of course, there’s nothing wrong with donating money to just causes, but did they need to admit this absurd white guilt to justify their donation?

The ‘something that has been brought to our attention’ part of the message probably means that someone complained about it. Did someone really take the time to write to Big Thief to let them know that their shirt was ‘racist’? This is so absurd, so petty, and so insane, considering the background of the band, that Big Thief should have totally ignored it. If someone is offended by Big Thief, this someone should get some serious help, and the band addressing the complaint achieves the opposite of their intention: finding racism where it doesn’t exist. Pick your battle, life is short.

I wonder what are they going to do with the shirts? I suppose they had a few in stock and the environmental cost for making just one shirt is not benign: it takes 2,700 liters of water to make a shirt which is enough water for one person to drink for 900 days, and the production of one shirt produces several kilograms of CO2, That’s probably why they are also giving to the climate emergency, but all this looks such a waste of everything