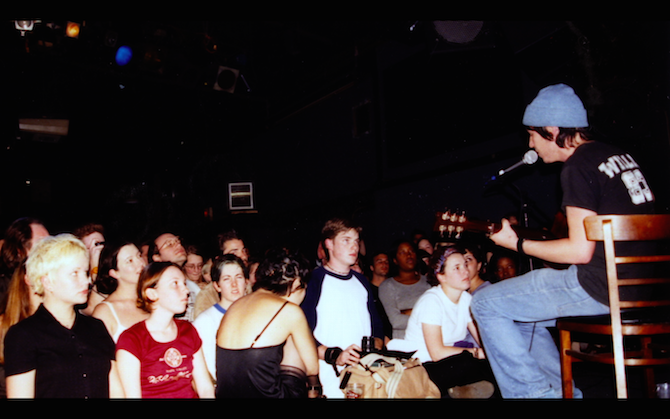 Elliott Smith’s show at Umbra Penumbra on September 17th, 1994 is said to be one of his earliest known recordings of a solo performance. The recording has been cleaned up and added to the expanded 25th anniversary edition of his self-titled album, and one of the 10 songs of the setlist, a clear version of ‘Big Decision,’ has been shared in advance of the release.

The song is one of the most anxious tunes Elliott has ever written, he plays a nervous fingerpicking guitar and spits his lyrics in an aggressive way, with an almost ferocious delivery. That’s the angriest you will ever find him, with complex guitar chord progressions executed in a speedy manner, departing from the fragile confession-tone he is often associated with – Elliott was certainly not a one-tone artist. He almost sounds breathless as if he was running through the song, trying to catch or escape someone, something, some trouble,…

The interpretation is up to everyone, but there is a dialogue in the song between ‘I’ and ‘you’ without being sure who are these ‘I’ and ‘you.’ The lyrics go back and forth between the two antagonists with an obsessive rhythm and a vertigo-like impression. There are enough drug references in the lyrics to make people believe Elliott is talking about drug addiction: ‘kick,’ ‘sick,’ ‘You can’t kick when you’re down,’ while the title could well be directly drawn from the Velvet Underground’s song ‘Heroin’: ‘I have made big decision/I’m gonna try to nullify my life.’ Is he asking a person to get sober, to kick an addiction, or is he dialoguing with the drug itself, in an internal exchange?

But just like his song ‘Between the Bars,’ dialogues with addictive substances are just metaphors for troubled relationships… I never understand the direct reading and the one-level meaning people want to give to songs, especially when you are talking about Elliott Smith’s work, this song is much more than a simple reference to heroin addiction. It’s well documented that Elliott was not using hard drugs when this song was written and used drug imagery and addiction as vehicles to talk about dependency and non-self-sufficiency. Plus, if the extreme anxiety of the song and its fast pace both convey the kick of addiction, it would rather parallel speed or coke than heroin.

‘Big Decision,’ which was rarely performed live – Elliott never played it after 1997 – was first released on ‘Various – A Slice of Lemon,‘ a Kill Rock Stars compilation released in 1995, while the song was also featured on ‘New Moon,’ Elliott Smith’s 2007 second posthumous album.