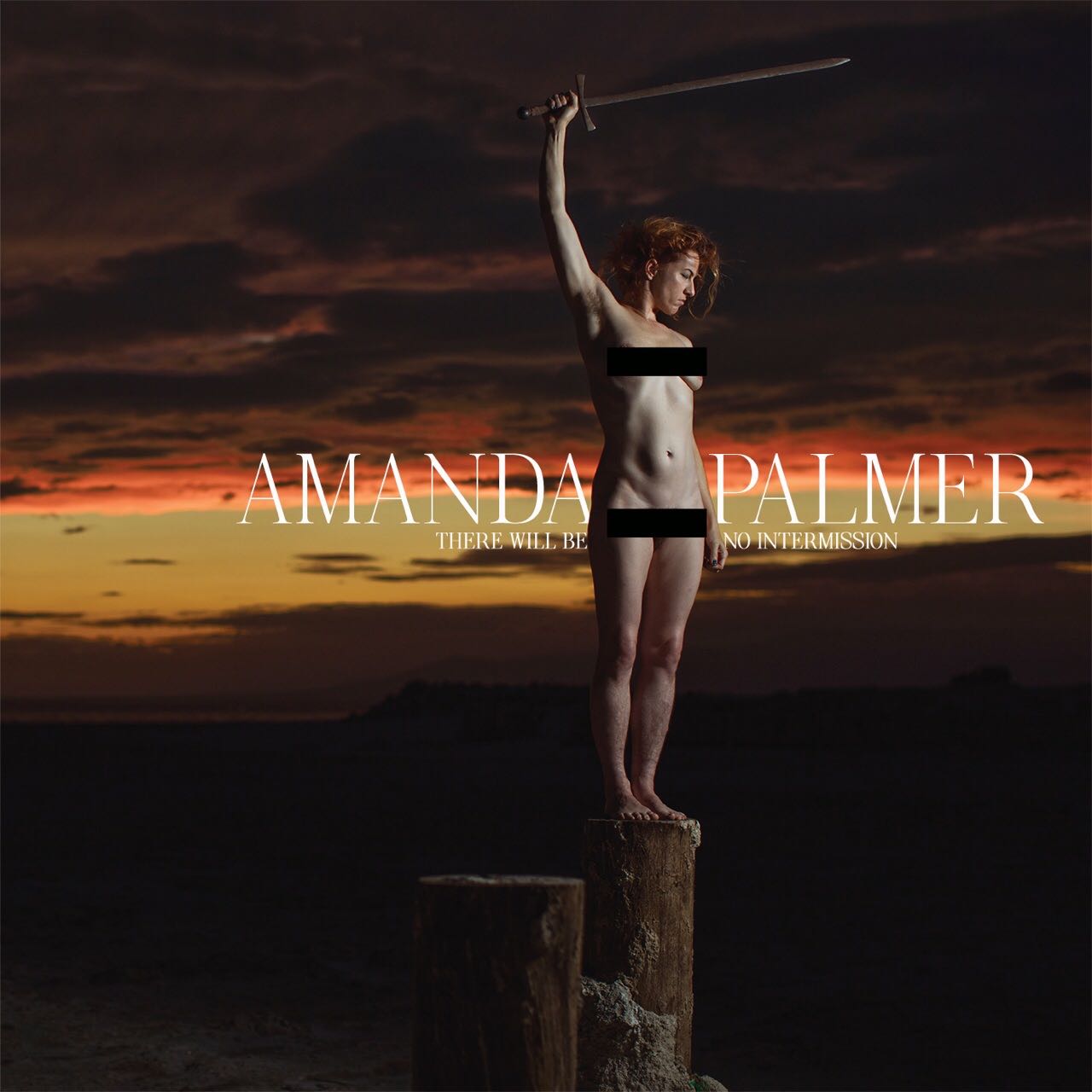 thank u, next – Ariana Grande – Maybe it isn’t the flat out masterpiece people think it is, but this “Sex In The City” 2019 songs of pop and love and romance and betrayal (and death) survives a dip around the halfway mark that  doesn’t affect the sheer brilliance of the first three and the last three songs. After Taylor Swift’s unintentional abdication last year as the best in pop,  Ariana has taken the position on this pop and mood, heavy duty EDM superstar distracted masterstroke

There Will Be No Intermission – Amanda Palmer – It is too long, too dusky, too quiet, the melodies are not sturdy enough to carry the sixteen real songs here, and ten minutes for a track without a melody line is pushing it. Sometimes, Amanda sounds so much like Leonard Cohen it is bizarre, other times she sounds like Tori Amos or Regina Spektor without the whimsy. But it is a titanic like the ship construction of self-awareness and political awareness born together and “The Death Song” is one of her greatest moments. Easily Amanda’s best work since 2008, they simply don’t make them like this anymore

American Football (LP3) – American Football – If emo must grow up, let it grow up like this, beautiful, sad, soundscape sorrow songs by the better than ever Mike Kinsella. You can start anywhere on this one and discover melodic, sweet, sorry gold. This is everything people think they hear with shoegaze

On The Line – Jenny Lewis – Between 2002 and 2004, Rilo Kiley released The Execution of All Things and More Adventurous and neither Jenny (nor Blake, nor anyone else in the band) have come close to reaching these heights since. On The Line comes close

Death Race For Love – Juice WRLD – The epitome of emo-rap: deeply depressingly, haunting songs of romance turned to ash with plenty of melody and plenty of autotune, leading to a spellbinding whole

While We Wait EP – Kehlani – A nine song holding action when we wait for her SweetSexySavage, she should have added a song and called it an album as the standard of pop moods is otherworldly. From the opening track, featuring Musiq Soulchild, this is grown up pop maneuvers to a chill beauty with 6lack, this is one of the best releases of the year

Don’t Tread On We! – The 1865 – Punk rock fast, hard, post-antebellum, black guitar uprising, the 1865 features multimedia artists and rock performers in pursuit of a pre-Jim Crow world and a post-Barack Obama backlash. Contextually, it is a rock opera and the good news is that the songs fit in every which way even as in a saturated marketplace they stand out as the rock and roll other

Assume Form – James Blake – A beautiful yet somehow slight modern singer songwriter piece of electronica set for his girlfriend Jameela Jamil (you might know as Tahani in “The Good Place”), and I am very happy for them. And their cast of first tier rapper friends. At first it didn’t work for me (I kinda panned it last week) but “I’ll Come To You” is the gateway drug of Assume Form, a deliriously yet restrained song of absolute emotional immersion (and the best indie love song since the Dirty Projectors “Impregnable Question” -though Blake be careful, we all know how that ended) and the rest of the album electronic love songs about the joy of love and sound, join in

Harverd Dropout – Lil Pump – 16 songs in forty minutes with everyone from Weezy to Ye to Lil Uzi Vert coming along for the ride on this nursery rhyme self-loving brag stuff about money, clothes, money, etc. It really has no right being so much fun

Not Changing – Jim Basnight – A King of power pop is more like a last man standing of classic rock. Basnight had a coupla great bands in the 90s and just kept on going ever since then. Not Changing is way too hard charging to sound like Big Star except for the title track with its background “woos” and getting no closer than the jingle with backbone “Best Lover In The World”. The former Moberly makes it seem simple here, the skills have soon imbued in the long performing together backing band, it jars and smooths all the way down

Highway Hypnosis – Sneaks – In a world where we have heard everything at least twice, this is experimental lo fi hip hop where a rap, a hook, and a song title might be the same line, “Holy Cow A Girl Like Her”,” with a bass lick holding it all day long

Prehysteria – T-Rextasy – Indie rockers with that all female vibe, it seems to allow bands to be fore more fluid sexual, or at least confused as per “Girl, Friend” (punchline? “IDK”). Everything here is tuneful, bright, clever and fun and this sophomore effort by the New York indie women is a great way to start the new year

For the Many – UB40 – The great UK reggae band is way on top of their game on their first album in six years. The lover’s rock stuff is ace, the dub stuff a little less so, but the Rasta is just fine. Is there anybody better at reggae pop in 2019, and keep in mind that Ali Campbell is no longer with the band (his brothers are!)

Grey Area – Little Simz -the UK has exceeded the US in the quality of rapping, there isn’t as much rap for sure but people like Little Simz and Giggs have better flow and better enunciation: not beats, not backing tracks or producers or mixes, but better rappers

Crush on Me – Sir Babygirl – Kelsie Hogue dubs herself a pop diva/producer and on her debut album she inhabits the queer world that Troye Sivan and King Princess live in, this is a strong collection with the great “Haunted House” leading the way and consistent, flirty songs like “Heel” and “Cheerleader”

When I Get Home – Solange – From the wilds of Houston, a gorgeous exercise in modern chill r&b that segues and stalks relentlessly for 19 tracks. It makes more sense if you catch the excellent video on Apple Music, without it the albums works through without any, actual, great songs or glueeyness

The Best Of Everything – The Definitive Career Spanning Hits Collection 1976-2016 – Tom Petty, Tom Petty and the Heartbreakers – This is the one that answers the world’s questions about Tom Petty – 38 songs as brilliantly compiled as humanly possible and two unreleased tracks including the demo od the absolutely fantastic title song “The Best Of Everything” . I don’t see the inner logic of the song placing, it feels a little random, but this covers all eras from Mudcrutch to WB

The Healing Game (Deluxe Edition) – Van Morrison – Present day Van isn’t the equal of the prolific man whose run of albums from 1989’s AValon Sunset through this one from this one in 2007 stands with all but the best moments in his career. My friend
Mark Reichenbach considers The Healing Game Morrison’s best album. The deluxe version, which includes a complete live album, outtakes, demos, as ell as songs with Carl Perkins and John Lee Hooker might well b

Ultimate Nat King Cole – Nat King Cole – Back in the 1990s I bought a triple Nat King Cole triple CD, it is better than this album -glaring omission on Ultimate:  “Answer Me, My Dear,”  and anyway 21 songs is nowhere near enough. However, it was what we have for NKG’s centennial

Keep On Keeping On: Curtis Mayfield Studio Albums 1970-1974 (Remastered) – Curtis Mayfield – Why not? But why? And they should have included Curtis/Live, Curtis In Chicago, and the Gladys Knight And The Pips album Claudine, and removed “studio” from the title

The Slim Shady LP (Expanded Edition) – Eminem – An additional ten songs, some of which are not worth your time (an instrumental “Guilty Conscience”) and some of which are (“Hazardous Material,” “Bad Guys Always Die”)

Spirit of the Stairs – B-Sides & Rarities – Nothing – Rare for you, unknown by me, this is some of the best shoegaze around