Ben Boecker Guests On “If These Walls Could Talk” With Hosts Wendy Stuart and Tym Moss Wednesday, January 25th, 2023

Who else but hosts Wendy Stuart and Tym Moss could “spill the tea” on their weekly show “If These Walls Could Talk” live from Pangea Restaurant on the Lower Eastside of NYC, with their unique style of honest, and emotional interviews, sharing the fascinating backstory of celebrities, entertainers, recording artists, writers and artists and bringing their audience along for a fantastic ride.

Ben Boecker will be a featured guest on “If These Walls Could Talk” with hosts Wendy Stuart and Tym Moss on Wednesday, January 25th, 2023 at 2 PM ET live from the infamous Pangea Restaurant. 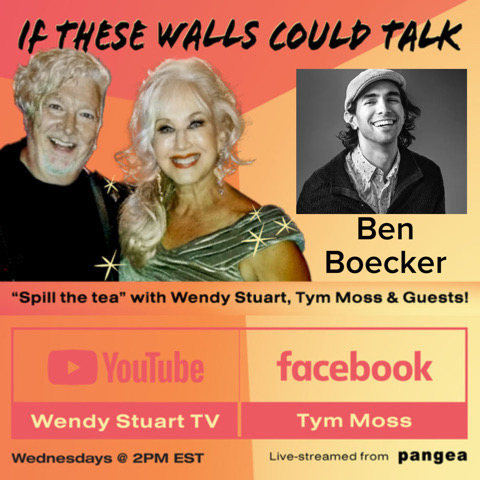 Wendy Stuart is an author, celebrity interviewer, model, filmmaker and along with If These Walls Could Talk she hosts TriVersity Talk, a weekly web series with featured guests discussing their lives, activism and pressing issues in the LGBTQ Community.

Ben Boecker is a singer-songwriter, cabaret artist, and voice teacher living and working in New York City.  Ben has performed internationally, from New York City, to the Poconos, to Frangipani Langkawi in Malaysia. In NYC, he’s performed one-man shows at Michiko Studios Stage 1, Shetler Studio’s Penthouse 1, and the Duplex, and recently made his 54 Below Debut with his solo show “Ten Years in New York”. He has also been featured in Pangea’s front room, and at Birdland Jazz Club on Suzie Mosher’s “The Line-Up,” where he is a frequent guest at Jim Caruso’s Cast Party!  Ben’s full-length musical, “My True Love! A Perfect Musical Fairytale” (NMI Search For New Musicals Grand Prize Winner 2017, Disney/NMI New Voices Award 2016) was recently premiered at USDAN Arts Camp, and has been developed at the BMI Workshop, Andrew Lippa’s Writers’ Bloc, and Ken Davenport’s Writers’ Group.  Ben has been a teaching artist in NYC for 11 years, with organizations including NYC City Center Encores, Brooklyn Acting Lab, and TADA Youth Theatre.  He is a proud member of the BMI Advanced Musical Theater Writing Workshop, the Dramatist’s Guild and Actor’s Equity.

Watch Ben Boecker on “If These Walls Could Talk” with hosts Wendy Stuart and Tym Moss on YouTube here: