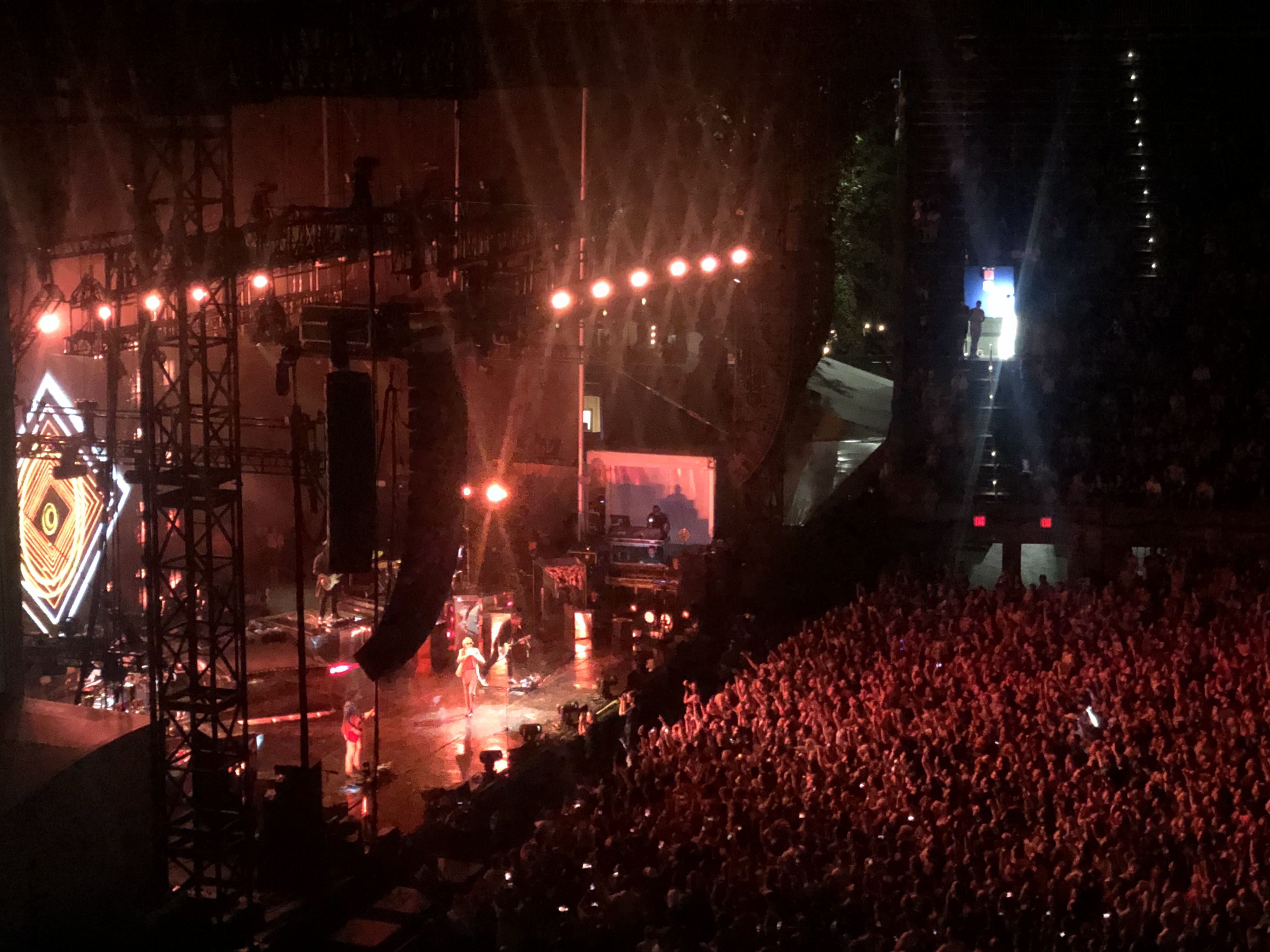 The last time I saw Beck was a little less than a year ago and, as Tomas Doncker noted, in attempting to replicate his 2017 album Colors, he was handcuffed to his loops and couldn’t break free of them. Last night a Forest Hills Stadium, with a hard rocking seven piece band behind him, all Beck had to contend with was backing tapes and still the short, 75 minute, set, failed to ignite. To quote Doncker again: maybe he can’t do it anymore.

Beck’s alt rock cavalcade of stars has spent the summer moving through the country, featuring Cage The Elephant and Spoon, in backup positions and opening, last night anyway, with Sunflower Bean. I missed Sunflower Bean but caught em earlier this year at Governors Ball and was verily impressed by their post-teen garage rock vigor. I did arrive in time for Spoon and am shocked to report they were the best band of the evening. Britt Daniel has been around as long as Beck has and is resolutely mediocre, a rock and roll alty duffer who never made it out of of the 00s. Last night Spoon performed a 30 minute, ten song sprint through their greatest hits including the bluesy r&b “I Turn My Camera On” and definition of indie rock “Don’t You Evah”. A tight, smart set promoting their current Everything Hits at Once: The Best of Spoon  album during an evening  that should be a blueprint of how they go about their business.

The audience appeared to be there for Bowling Green’s favorite sons, the aggressively hard rocking Cage The Elephant, who have a coupla huge hits under their belt, and a handful of bad albums, and a reputation of being really great live on stage. Really great? Brad Schultz came into his own at Lollapalooza in 2014 and Cage The Elephant joined the ranks of great rock bands based upon his astonishingly energetic live shows. Five years later, despite an adoring audience, Brad was lively and yet way too studied, from the oddly visaged first couple of songs, to the haranguing hard singer stand-up, and finally the asinine call and response, Cage The Elephant just about got away with it for an hour. However, David Allen Jones remains the best thing to ever come out of Bowling Green.

Finally (doors at 5, show at 845) Beck arrived to announce that his Grandfather used to work at a gas station in Queens and so he had absolutely nothing special planned for us, sprinting through the  songs with a setlist that he shuffled slightly as he has been doing every night this song. 21 songs with a sense of randomness as they neither ebbed nor flowed, didn’t build up, didn’t low down. Even big, big audience fave “The New Pollution” didn’t connect as it should have. By the end of the evening, Britt joined Beck for “Pump It Up” and  Cage for their new Beck featured single that gave the tour its name. But the highlight was encore opener “Where It’s At,” and it wasn’t very high. Beck and Britt have been doing this for a quarter of a century, Cage for over a decade. It shows.