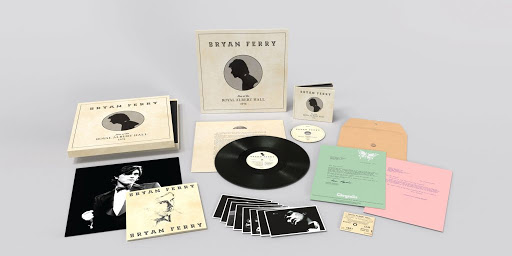 Not a great week, but try Bryan Ferry and if you are feeling adventurous, add Yorkston/Thorne/Khan, cap it off with Christopher Paul Stelling

The Boys of Summer (Live at EartH, London, 2019) – Bat For Lashes – she is somewhat boring in a Cat Power sort of way, but her Henley cover is delicious, and it carries this odd EP which includes three new arrangement of her low cast material – C+

Live at the Royal Albert Hall, 1974 – Bryan Ferry – a very early solo Ferry, circa the classic Another Time, Another Place debut and it is an absolute treasure… if they are going through the shelves I’d prefer one in 1978, you know, The Bride Stripped Bare, till then he kills “Don’t Worry Baby” -actually he kills everything – ALBUM OF THE WEEK – A

Fuck The World – Brent Faiyaz -smooth, chill r&b, a scoping bass and echo effect on song after song with a beautiful voice and a mellowness that is still boring  – B

The Movement Revisited: A Musical Portrait of Four Icons – Christian McBride – The icons are MLK, Malcolm X and Rosa Parks, the portrait is spoken word plus jazz musings – C+

Best Of Luck – Christopher Paul Stelling – The rock and roll folkie who used to build his own guitars has an upbeat, very well written collection of tuneful and uplifting songs, it is a real pleasure and worth listening to from one end to the other, nearly any track will do but if you want a taste try the rhythm chugging guitar of “Trouble Don’t Follow Me” – B+

UNLOCKED – Denzel Curry, Kenny Beats – Beats is a major producer who adds incredible samples and beats while keeping rapper’s DNAs in tact, Denzel is the youthful rapper (I saw him open for Billie Eilish at Radio City last year), and  a clever blur rhymer. Together they are always worth your time – B

Black Habits – D Smoke – The Rhythm And Flow season one winner is also S.I.R.’s brother and therefore a known entity in the hip hop community, so what the hell Smoke was doing on a reality show I can’t begin to fathom. The Kendrick comparisons are apt enough but despite the skills at work this won’t change anything but Smoke’s public image – C+

The Fallen Crimson – envy – Stereogum call it blackgaze, which means wall of guitars, occasional mbv style melodies, and a whole lotta screamo – B

Church – Galantis -The Swedish duo always hit me as a poor man’s Chainsmokers, way too hit and miss for pop music. Same here, only their better moments,  the excellent “Unless It Hurts” for instance, are better than usual – B-

Father Of All Motherfuckers – Green Day – It isn’t a bad album, and puts Green Day ahead of Foo Fighters on the greatest arena rockers anywhere not called the Stones or The E Street band, but it isn’t great, the songs aren’t memorable, and while it isn’t unpleasant it is a bore – B

Remote – Hamerkop – samples with vocals on top , certainly proper songs but a lot of effort to create a sound that isn’t immediately arresting – C+

Petals For Armor I – Hayley Williams – I’ve been wondering what it reminds me of, Paramore circa 2007 only much more self important – C+

There is No Other… (Deluxe) – Isobel Campbell – The former Belle And sebastian singer plays it soft, slow, sad, and on a Tom Petty track, just plain weird… and then there is the acoustic songs – C+

Dreamers Do – Kat Edmonson – typical super-sweet smooth jazz from Kat, indeed stuff like “A Dream Is A Wish Your Heart Makes” and “Chim-Chim-Cher-Ee” are too on the nose, it feels off hand, easy and self evident – C+

Never Not Together – Nada Surf – The around grunge but not grunge band from the 1990s remain creatures of habit, with a growing sophistication that does have its fans, think Fountains Of Wayne but more American rock and less snobbery. If you like em, this is one of their best albums ever, if you are on the fence, it is still pretty good with songs as worthy as “Live Learn And Forget” – B

Which Way is Forward? – Obongjayar – an arty take on Afrobeats via Nigeria via London, it all sounds a bit Peter Gabriel, but even so an original sound that might repay close listening – B

No One Else Can Wear Your Crown – Oh Wonder – Oh Wonder will never repeat “Landslide,” (the track Lil Uzi Vert sampled so well), but that was just perfect and if nothing else the pretty, tuneful duo have done is as good, they are good enough – B

ALTER EGO – Prince Royce – the Bachata guy is huge, he isn’t close to reggaeton except the beats can get emphatic, and if you love him maybe you can take 80 minutes of him. Me? I’m done after ten – C

LIMITLESS – Richard Marx – The very popular songwriter just won’t go away, he continues to hit us with middle of the road slop writing – MUST TO AVOID – D+

Quadra – Sepultura – “Thematically focused on the notion of society’s blind acceptance of predetermined ways of thinking and being, this is (a) cerebral and thoughtful” claims Dom Lawson on Blabbermouth (here), I’ll take his word for these hardcore guys brutal, earache attack on your sense, “Means To An End” will blow you away, a shuddered and loud roll of guitars and thundering drummers with one of the best screamers in the business on top, if you are not sure about hardcore, start here – B+

All Or Nothing – Shopping – post punk, geometric guitar angles and bass picked sounds plus sing spoke vocals – B

Play That Rock N’ Roll – Supersuckers – what Hot Country Knights is to Americana, the long running Supersuckers is to rock and roll, a borderline parody that can merge lanes into straight up, no chaser hard rock. A little too generic from either side (Spinal Tap was a long time ago), it’s still hard not to love “Dead, Jail, Or Rock N Roll” – C+

The Photograph (Original Motion Picture Soundtrack) – Robert Glasper – The Erykah Badu cover of Squeeze’s “Tempted” never got the exposure it deserved, Lucky Daye is dull, and Glasper performs smooth and intense piano based jazz moves all over – B-

Half Moon Light – The Lone Bellow – The three piece band offer more Americana, like a country band if country wasn’t here. Beautiful and well crafted quasi-folk, with great harmonies and 60s style pop arrangements, but still a bore – B-

Point of No Return – Those Damn Crows – classic rock , anthemic, big sound riffs and swagger but nothing special and missing a song or three to lift it up… from Wales? They sound American- C+

No Face No Case – T.R.U., 2 Chainz – T.R.U. (The Real University) is 2 Chainz Atlanta based label, and here he compiles releases from his roster, Hott LockedN, Skooly, Sleepy Rose, and Worl, as well as taking the lead himself, and it is different enough from song to song to hold your attention – B

Between Life – Typecaste – sing and scream hardcore sludgy metal – B-

Birds of Prey: The Album – Various Artists – The Doja Cat track is killer, Megan Thee Stallion less so, everything else is everything else, but where is “Barracuda” -the most inspired use of music in the movie – B-

Reliever – William Prince – Wow, that’s some voice from the Canadian Americana guy, it improves everything it touches. And it needs to, it isn’t illegitimate to raise an eyebrow or three when a song is called “Old Soul”. and the entire enterprise outlasts its welcome before you reach the third track – C

Navarasa : Nine Emotions – Yorkston/Thorne/Khan – Indian-jazz fusion and if you think that sounds cool it, in fact, sounds very cool though not always, listen to “Sukhe Phool”  and pass on “The Shearing’s Not for You “. Khan is a master sarangi (an Indian stringed instrument) and it adds an otherness on this their third album, though there is something awful blah behind the concept (the emotions of art?) – B