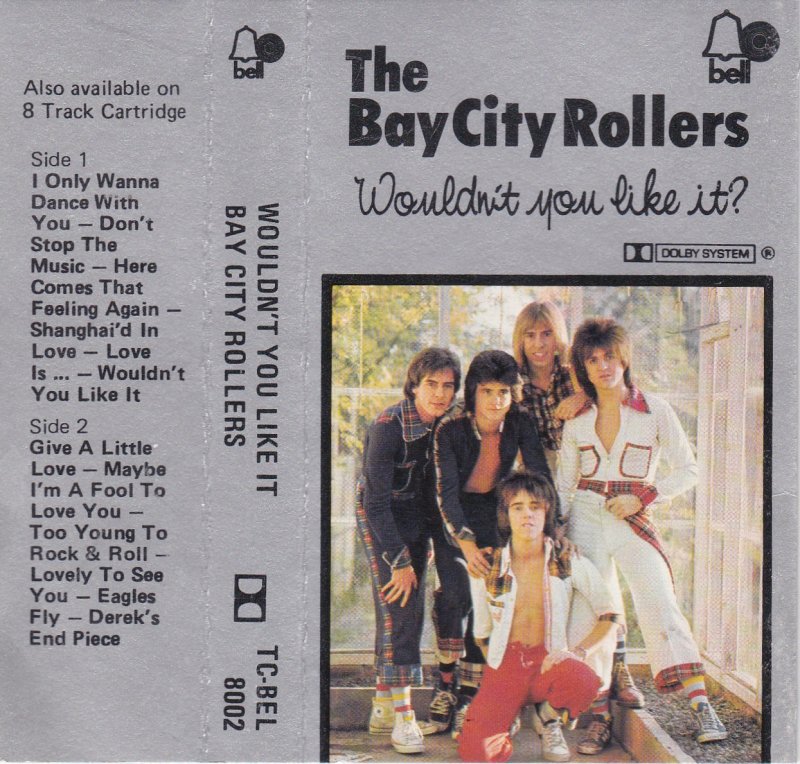 1975 was the tale of two music scenes, on the one hand Bob Dylan, Joni Mitchell, Little Feat, Bob Marley and more, were releasing career highs, and on the other glam rock were taking the ponderousness out of rock lead by Marc Bolan self-produced “Zip-Gun” odds and sods from his previous album,  and changes two Bowie’s Young Americans. By 1976, the change in the UK had arrived and the Sex Pistols would rule Britannia within a year.

Given the circumstances, Bay City Rollers Wouldn’t You Like It? wasn’t a last hurrah, but the future in the back mirror was a warning they could shrug off as the US broke wide open for them but would catch em available. The styles would change on them completely, their tween and teen audience were five years older and leaving them, the personal had been cremated by the political, and Bay City Rollers, proving an adage I just made up, it is always lighter before the dark were a supernova, that hadn’t exploded yet.

BCR’s third  album (fourth including a compilation) was released in December 1975, “Saturday Night” was released in the US in January 1976, and was the best selling single of 1976. A change was going to come, but the boys had another coupla years in em of world beating Tartan pop. And so, for BCR, recording between tours with 95% self-composed material, Wouldn’t You Like It? was another hit machine, featuring a top ten smashe, and a sound maturing without molding, and older and not old. By the time you reach the section on “Here Comes That Feeling Again” they feel like Chris Nolan’s “Tenet,” going forward and backwards at the same time. Strings appear on “Lovely To See You” as well.

Would You Like It can not be compared with, say, The Hissing Of Summer Lawns on one hand and Cockney Rebel’s The Best Years of Our Lives, it was growing up with but still necessary to reach its base audience. Th album got to # 3 in the UK, only one song released as a single (producer Phil Wainman’s “Give A Little Love”), probably because “Saturday Night” had exploded in the US, didn’t help.

Musically, BCR’s are growing but stiltedly, they open with two songs composed by lead singer and primary heartthrob Les McKeown’s blueprint tartan glam “I Only Want To Dance With You,” including horns and a guitar solo on the bridge and a lead up like “Twist And Shout” reduced to a moment. “Don’t Stop The Music” is also a reduction disco ala Kool And The Gang. The album leads the Tartan horde straight to the dancefloor. But after that they aim for the middle of the road with Yacht Rocker “Shanghai’d in Love” which sounds like soft rockers Bread, written by Eric Faulkner and Woody Wood. The rest of the first side belongs to Les, who musters the crew for the final song of the first side, “Too Young To Rock And Roll”.

Side Two opens with the single, “Give A Little Love” -a blatantly ear candy song built to be sung along to. The title track is a crisp little rocker, Alan Longmuir gets a song in with the plodder “Here Comes That Feeling Again” and the last song on the twelve song album is the instrumental “Derek’s End Piece” which starts with a drum solo (I know but good for Derek) and climaxes with Derek’s spoken word declaration of love.

It makes you wonder what would have happened to the boys if Clive Davis hadn’t taken an interest in them, and “Saturday Night” hadn’t blown up in the states while punk rock was putting the boot in in the UK. Wouldn’t You Like It? is BCR’s equivalent to Headquarters, and then they never quite reached Pisces, Aquarius, Capricorn And Jones, Ltd.  “Saturday Night” derailed the band and they never figured out how to regroup and move on, they would have two more hit albums but the old glory will have passed.

But not yet, 1977 was a bigger year for pop, BCR still had Japan in their back pocket, and they were, as always, never just throwing albums out. Everything else not withstanding, these were the guys in charge of their fate even while playing a middle ground that would eventually eat em up. Here the world was still enthrall, and their army remained too young to rock and roll but not too young to Bay City Rock and Roll.

a defiant snub to death