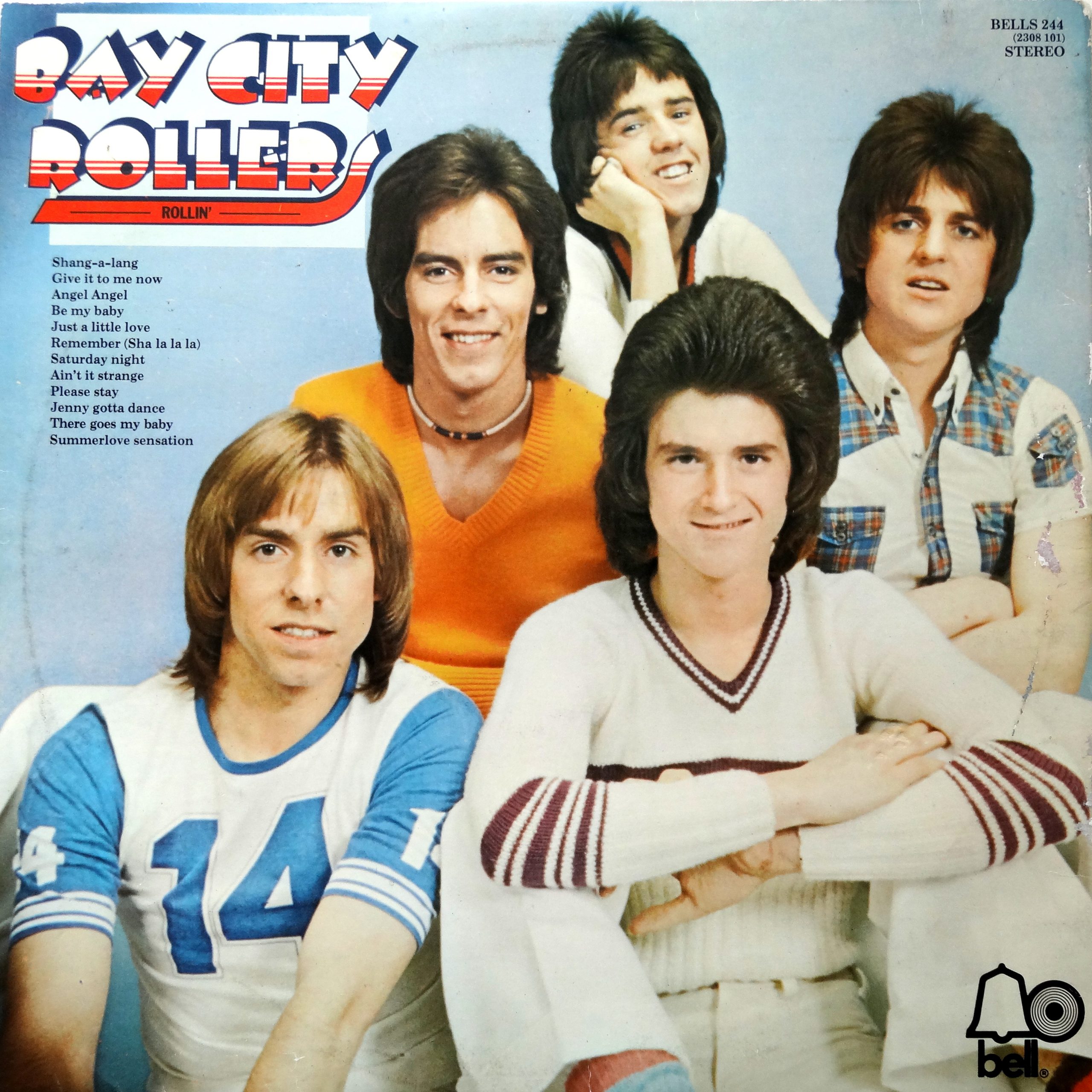 Between two Harold Wilson  lead governments, Edward Heath, the leader of the conservative party, was Prime Minister from 1970 to 1974, during the years bassist Alan Longmuir’s  third band, Bay City Rollers, were taking their mix of bubblegum and Motown guitar rock to world domination. And paradise in the UK was indeed deferred, Heath was battered by the UK’s fall from economic power, the British working class was in disarray, and with the future of a United Kingdom who had to finally deal with the death throes of the Empire, the Brits were looking for the sort of exuberance associated with… The Beatles. And they got it.

Bay City Rollers were a capable rock band with a sturdy rhythm section featuring Alan on bass and his brother Derek on drums,and similar to just about any band toying with American r&b they moved on their stomach, that was the lynchpin. Listening to their debut album Rollin’ what surprises is how manufactured it isn’t. The open shirt, ankle bearing, tartan wearing and waving  Scotland uber alles were based around their gay (when it was a scary business to be gay) manager Tam Paton well documented penchant for teenage boys. Once nineteen year old Les McKeown joined the Rollers as lead singer, the teenage girls of the time joined Paton and fell hard for the five men, the oldest Alan at twenty-six, the heart of the band’s music guitarists Woody Wood and Eric Faulkner whose ringing and toned guitars gave the band that shimmer, and Les -a heartthrob’s heartthrob.

The Rollers were not pop  bubblegum like Mud and Sweet, they weren’t a Chinn and Chapman manufactured glam boys, and they weren’t on Mickie Most’s RAK Records -they were on Bell, owned by Arista, owned by, wait for it, Clive Davis: they were immediately playing with the big boys. The band themselves had their roots precisely where the British liked their rock heroes in the 1960s and 1970s: among the working class. At first, the Rollers appealed clearly to the kid sisters of Beatlemania girls (yes, sisters, not daughters), while also representing the place where the initial teen and tween fans came from. Like the Beatles before them (and not so long before them, the Beatles ended in 1970), the Bay City Rollers broke through in the arms of teenage girls, in 1974.

Bay City Rollers were a triple threat, like Brian Epstein before him Tam tried to manufacture the bands look in keeping with his own sexual desires, the band themselves had a taste for US black pop, harmonies, and early sixties folk rock morphed, and the final ingredient was the songwriting team of Phil Coulter (music) (toldja we’d see his name again here) and Bill Martin (words). Coulter and Martin had  run out a string of smashes including “Puppet On A String” and “Congratulations,” as well as being go to guys for early 70s glam boys. Tam pressed them into arranging, producing, as well as writing half the songs for Bay City Rollers debut album, Rollin’, released  in October 1974, it went platinum (more powerful when you realize it wasn’t released in the US).

Heralded by the Coulter- Bell “Shang-A-Lang” in early 1974, it went to # 6 in the charts, Rollin’ stands as one of the great debut albums: a twelve song delve between rock, pop, black pop, white blues, and four smashes two on either side of the vinyl release. Les McKeown had something we hear now from people like singer Anne-Marie -who can appear on a Rudimental track as a featured artist without hijacking the entire song: Les was strong, melodic, but not overwhelming, he both stood out and blended in and with his thick hair, and twinkling pretty boy looks he was both ineffectual and affective, he was the face among faces.

Rollin’ is a brilliantly constructed 36 minute encapsulation of a nascent boy band greatness. Eric and Woody wrote four songs, Coulter-Bell wrote six songs, and there were two covers. This was a tight, pop conceptualisation that falters precisely once, the second song on the first side, “Give It To Me Now”  is a twelve bar blues that doesn’t quite function the way you might want it to, though if I was a teenage girl its blatant sexuality might have been a turn on. And it is the parenthetical switch up between “Shang-A-Lang” and “Angel Angel”. The four ringing chords intro to the album and Derek’s steady thump lead to the anonematiepia on one hand, self mythologizing, hook laden rock and roll call to the dance and the anthem of millions on the other: it was the Rollers in musical standard terms, it was the invite to enjoy yourself. As for “Angel Angel,” it is unreal that it was Faulkner-Wood’s first release, a mid-tempo heartacher with a twist in its tail, a title hook that captures you immediately and puts the duo up there as serious songwriters, and a conceptual constant with “Shang-A-Lang”.  If the complaint here is that the songs aren’t as hard as even something like “Ballroom Blitz” released in 1973, BCR were hard in a different way, they were a rallying cry that wouldn’t undercut themselves with oversell.

We’ve been mentioning the Beatles quite a bit and Rollin”s antecedent was not Sweet but the Beatles first two albums, especially Please Please Me, something that becomes crystal clear with their cover of “Be My Baby” from the same well of inspired theft as where the Beatles took  “Baby It’s You” . “Baby It’s You” was composed by Burt Bacharach, so was “Please Stay” on the second side of Rollin’. And while Les was no Lennon as a singer, neither was anyone else. Lennon covered “Baby It’s You” three years after the Shirelles, the Rollers covered “Be My Baby” twelve years after the Ronettes: my point is, BCR’s version had both distance and a revision in your head of the clanging glam sound ruling the UK. Side Two is the equal of side one though it might not have sounded like that at the time as “Saturday Night” failed to hit the charts two years earlier and wouldn’t for another year, till the US discovered it. The re-recorded version, with Les on lead vocals, was their biggest hit, a dream song of love, romance, always dance, a hopeful and youthful cool dreamy track of fun with the one you love, and a chant that would stand well in any football stadium. As epic hits go, “Saturday Night” was the sort of song that radio stations in the States would play for 24 hours straight. The album ends with the lovely hit single (not including “Saturday Night” there were three), “Summertime Sensation” -yet another anthem for teens, yet another song that would blow first Scotland, then the UK, then Asia and the US, on their butts.

Bay City Rollers were more than capable of playing the music, everything clangs and rings out, the songs are rock singalongs and they are performed with verve and complete conviction that evolve to nonsense hooks, all shangers and bangers, on a great collection of  dance tracks (though with a ballad a side as well! “Please Stay” and “Just A Little Love”). This is not early One Direction, despite early changes in personnel BCR were a clear band aesthetic, the album is not proforma and not a manufactured sound, but a clear eyed vision of where UK pop was going to: harmonies meet singalongs and tunes tunes tunes, with shirts wide open, tartan flares, and an innocent sensuality that girls could embrace without being devoured by. BCR would become the biggest band in the world based upon this album and they would travel the world and play for hundreds of thousands of fans with an album built to be sung along to. 12 songs, 36 minutes, it changed the world for a little while and it remains a masterwork of pop studiousness.