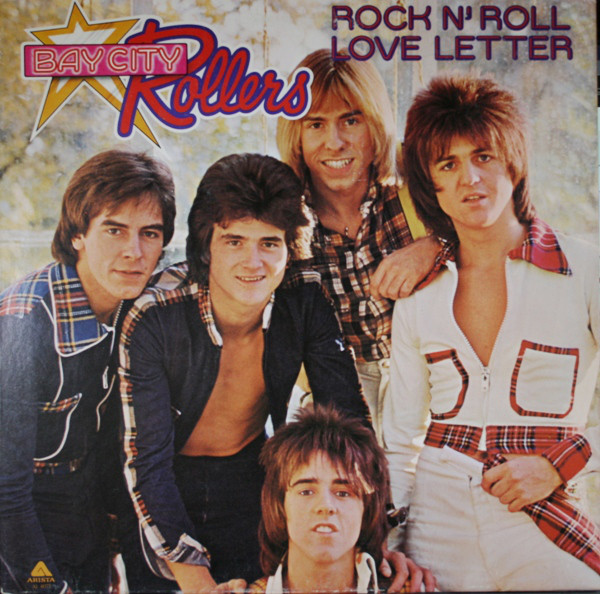 The tough thing about reviewing Bay City Rollers’ albums is that it is a tragedy in waiting. we know how it ends, we lived through it, and you want to remain in the mid-1970s, when you were a  tweenie girl member of the Tartan horde and Les McKeown was an Olympus God of cuteness. Fortunately, it is now May 1976 and the dreadful hasn’t yet happened. Quite the opposite. The North America/Japan  only Rock n’ Roll Love Letter, a mix and match follow up to the late 1975 international smash “Saturday Night” as Clive Davis, no fool when it comes to selling records, took an interest in them, was their fifth release and a huge hit in Canada, the USA , and Japan (it didn’t make it to Western Europe). .

It was still the beginning of the end  with the classic line up Eric Faulkner,  Stuart Wood, Les McKeown, Alan Longmuir, and his brother  Derek Longmuir losing Alan in the same year after a suicide attempt (the homosexual Tom Paton was blamed for his inappropriate behavior with bands members) but still intact for the two new songs on Rock n’ Roll Love Letter. The album is an equivalent to The Beatles Second Album, though it isn’t Brian Epstein, not a manager you can feel hurling BCR into the world of pop superstardom, but Clive Davis, the master pop music man who saw what was clearly there: a chance to do what pop mastermind minds have done to boy stars at least since Sinatra at the end of the second world war, make them huge stars for bobby soxers, or the Tartan Hordes -whichever you prefer.

The album takes two from Once Upon a Star; seven off Wouldn’t You Like It? and two newbies, for a collection that holds together well even today. Clive’s Arista Records were savvy enough to push the Eric  and Stuart songwriting duo, and ten of the songs are from their catalog, and while US didn’t warm to the BCR the way Canada and Japan did,  #31 in the Hot 100 was much bigger than it it is in 2020 and the songs were sweet enough to stick and strong enough to birth pop teen r&b  with “Money Honey” (no, you’re quite right not Presley’s), which reached # 9 on the US Top Ten, the second of two songs Davis had the band record and the second of two hits -it would arrive in Scotland the following year on Dedication. Since all the songs were recorded within a year, the skim works as more than a hits, as a self fulfilling pop prophecy, the piano pounding “Money Honey” a slam dunk intro to the # 6 (in the US) reaching title track.

If the rest of the album isn’t as combustible, certainly  “Rock And Roll Love Letter” is a perfect “Saturday Night” DNA’d boy band masterwork, written by American singer songwriter of the 70s Tim Moore Asylum Records star, Clive Davis had wanted him for Arista and when he lost to David Geffen, moved to get the Roller’s Moore’s  “Rock And Roll Love Letter” the moment it was released, a song that would take a specifically excellent pair of ears. (Moore is an interesting pop story, two parts warning and one part live your life exemplified).  It cemented Bay City Rollers in the States. The inclusion of “La Belle Jeane” suggests Davis, who was clearly calling the shots on this one, saw them as a band with a future beyond the Tartans, and the inclusion of “The Disco Kid” found them part of the moment. Two top ten singles blared mission accomplished. There is nothing not to like about the album, it was a huge success and in 1976 Bay City Rollers continued their world domination.