Bay City Rollers “Once Upon A Star” Reviewed 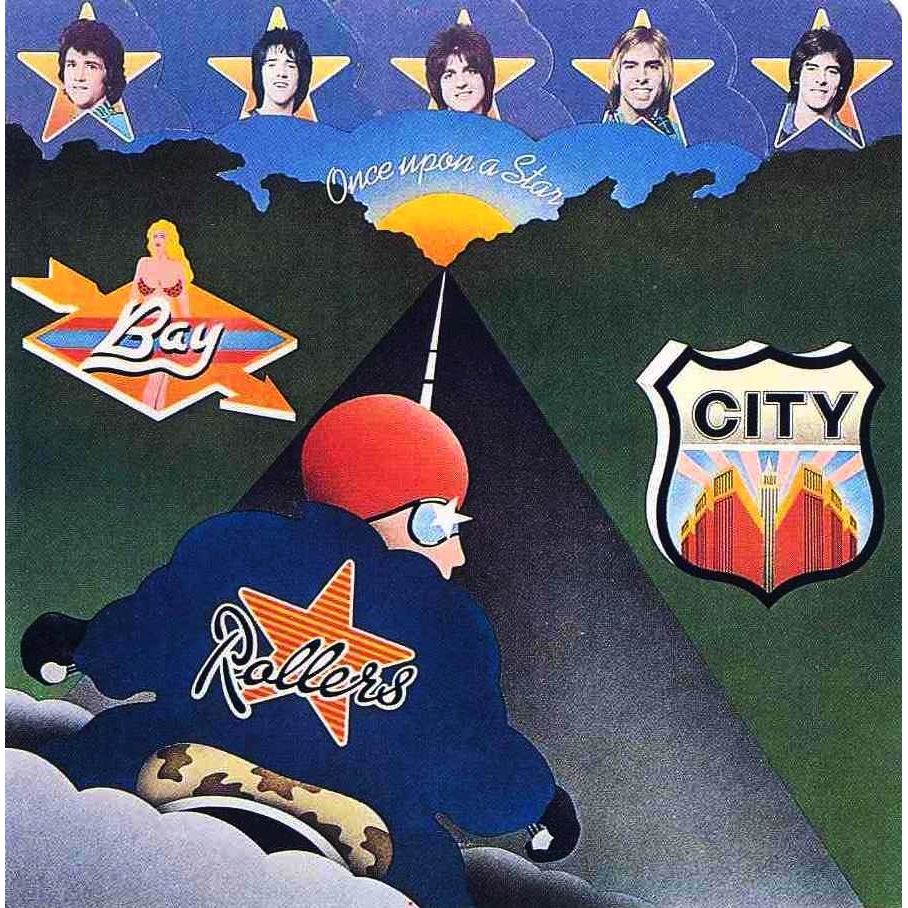 Four years after “Keep On Dancing,” their first single re-recorded with Les McKeown taking the vocal on their sophomore effort, and a year after Rollin’ (my review here) and things are successful but bumpy. A week after his brother ran over and killed a septuagenarian woman, Les did the same thing on the same street (76-year-old Euphemia Clunie), meanwhile two Rollers had had nervous breakdowns, the scene of concert after concert was pandemonium resulting in photographers being bashed by microphones and teenage girls destroying entire theatres (if you can find it, read Harry Doherty’s 1976 Melody Maker review of their New Victoria gig: “When the boys finally came on, the stage was stormed, and one could only feel sorry for the fraught security men who were confronted with the maniacal tendencies of the females. The Rollers left the stage after the second number until the situation had been brought under control.”). And all the while the USA beckoned, lead by Beatles at Shea Stadium promoter Sid Bernstein and  record label starfinder Clive Davis, who had just purchased Arista Records and got Bell Records and BCR in the bargain.

But before that there was still Bay City Rollers second album, Once Upon A Star,  released in the UK, May 1975, just three months before  “Saturday Night” hit the US two years after its initial release  and BCR beat down the USA. The album opens with “Bye Bye Baby,”  an old Four Seasons, Bob Crewe and Bob Gaudio classic, and Bay City Rollers stripped it down to the essentials, Les’s lead, back up harmonies, thump drums and guitars: nothing too great, no magic dust except BCR were magical at the time, and it went to # 1 in the UK as it should have,their second release also going platinum. The rest of the album adds an Everly Brothers rewrite to a mix of Eric Faulkner and Stuart Wood composing seven of the twelve songs, including the terrific pop harmony oom pah pah title track, the bass ridden “The Disco Kid”  and the faux baroque French pop of “La Belle Jean”. If people were noticing, Faulkner was emerging as the utility man on multi instruments (that’s a mandolin on “Marlina”),  and Les, the handsome kid who took over lead vocals and lead the boys to the promised land. Within the confines of  teeny bop pop, BCR played with genres and were charming to boot, but they could have used a little Slade, a little bang for your buck. Not that the fans minded so much, in (somewhat) modern terms this was their Take Me Home, and it did what it was meant to do.

At 37 minutes in length, Once Upon A Star is the definition of a successful second album, it consolidates the strengths, moves forward musically, gives full reign to two of its own musicians as songwriter, and was a smash hit with # 1 single and album (though it could’ve used another hit single), and set the place for insane tours and the invasion of the USA …