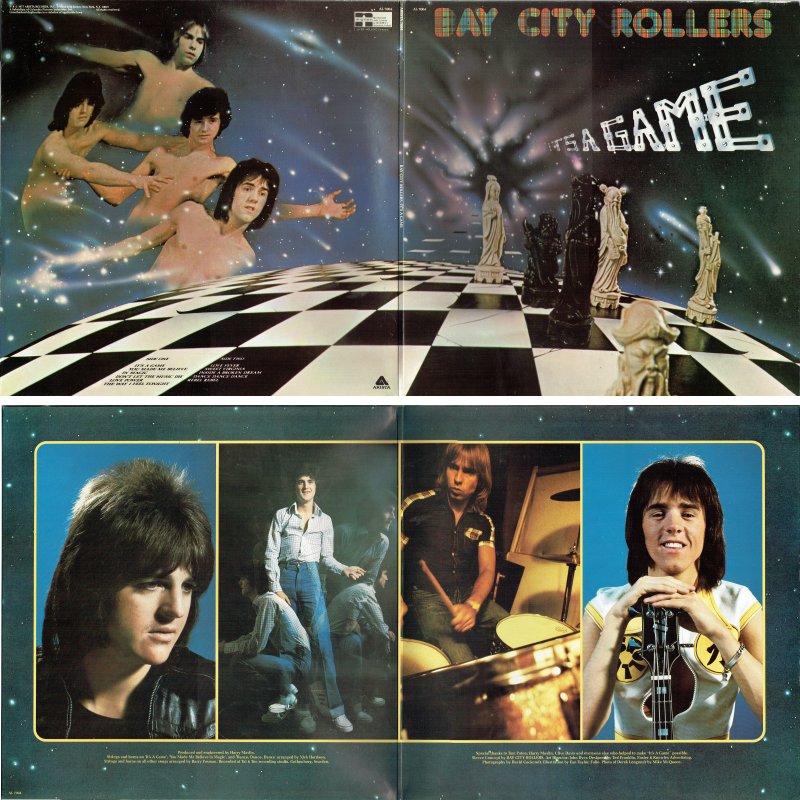 Arista says they love it but the kids can’t dance to it -Nick Lowe’s two line put down on Clive Davis’ 1970s record label was simple but it says it, and true. As Clive tried to re-position the band for the 1980s, in 1977 his lack of courage hurt the Bay City Rollers as punk rock and new wave loomed ahead.

Davis did things that should have worked. He had producer Harry Maslin, fresh from “Fame” (US No. 1) in 1975 and “Golden Years” (US No. 10) in 1976, the entire Station To Station, and about to repay Clive’s belief in him with six consecutive number ones for Air Supply in the early 1980s, mostly wrap BCR in AOR gauze, and let Woody and Eric have their way composing half the ten songs. Stuck between the Tartan Hordes and Yacht Rock mainstream acceptance, they didn’t appeal to either.

1977 was not a terrible year for BCR but the writing was on the wall.  Rhythm guitarist Ian Mitchell was replaced by Pat McGlynn for a couple of moths (he later sued manager Tam Paton for attempted rape) and lead to Alan Longmuir’s return to the fold, though It’s  A Game, the result, was recorded s a four piece.  It’s A Game would go gold in the US, “You Made Me Believe In Magic” was a hit(ish) single, and the album did quite alright and yet not the huge successes of their earlier incarnation.

The game had changed, what BCR needed to do was not to embrace adult oriented rock with a side of disco and way too much musicologist, but to strip it down with modern guitar rockers and attack. What they needed to do was reach out to Chris Spedding to produce and Nick Lowe to compose pop hits for them, so they could settle down as a rock pop new wave scene. At the very start of the album, the keyboard flourish promises well, it sounded as pop as ABBA, it is pure “Dancing Queen” -but the arty title track isn’t great, having to make room for the harmonies the song had one flourish too many, it is a turkey. It ends with a misjudged shout out to their core audience with David Bowie’s “Rebel Rebel”. In between they are hopelessly old fashioned, when they should have held on tight to the Tartan Hordes, they loosened their grip with a series of songs that just aren’t good enough. Within three years they’d turn to new wave but it was too late.

On the plus side, the band sound very strong, Les has seldom sung better (Les was born at the wrong time: he is built to jump on rap songs and add his voice to EDM tracks by the Calvin Harris’ of the world). BCR take the material seriously and execute it well but with the exception of “The Way I Feel Tonight” (a beauty and the best song here) that settles the middle of side one, side two, 4 woody-Eric and the Bowie, is a disaster.

This was the other side of the mountain for BCR, Davis had screwed up and it cost the band.