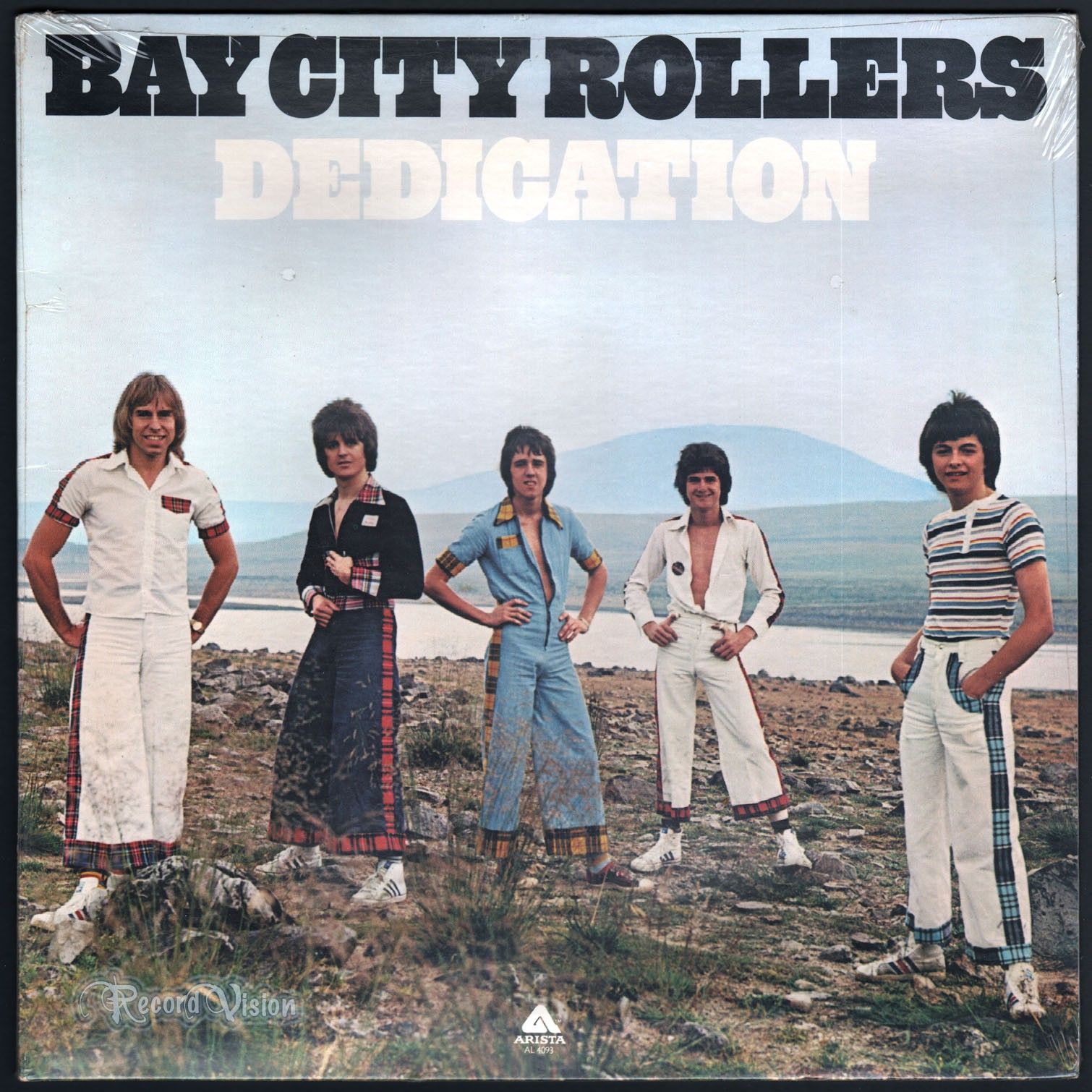 First, I am reviewing the US and not the UK release of Dedication for one excellent reason, dealing solely with the September 1976 release, the changes aren’t huge, the US drops “Money Honey” and “Rock N Roll Love Letter” (previously released) and received their epic “I Only Wanna Be With You” and Russ Ballard’s “Are You Cuckoo” and went away with a better album. Side Two is specifically superior in the English version.

The UK would see 1977 -the year punk went big, as a washing away of boyband MOR, and in the UK the Tartan Hordes considered it a “crack in the armor” according to Allmusic (here). But it really wasn’t. Here are the chart placing for Dedication per Wikipedia (here)

Which hits me as worldwide success.

But is it bottoming out aesthetically?

I say no, covering Dusty Springfield and the Beach Boys can be very problematic but “I Only Wanna Be With You” was not “Son Of A Preacher Man’ by any stretch of the imagination and “Don’t Worry Baby” was sung by Brian Wilson and not the better singer, his brother Carl, plus a huge song for the Beach Boys, often covered, and one that would be real  good for the fans (though they should have used Bryan Ferry’s lyric from 1973’s rewrite). The two songs show the Bay City Rollers at their best. In a different era, Les McKeown could have had a career singing for Rudimental or Clean Bandit, EDM bands where he can impress and get out of the way at the same time. “I Only Want To Be With You” is puppy love (though Michael Hawker wrote it for his wife, a back up singer for the likes of Helen Shapiro and Cilla Black) and the boys don’t compete with the original, instead they perform a trick that is beginning to come into fruition, it is underplayed so the sound is both thin and also addictive, it lets the fans all the way in. That’s why they don’t change the sexes

It remains that way so the girls can comfortably singalongaLes

“Don’t Worry Baby” is a very tense song, get rid of the car racing text and it is about teenage insecurities and also, how love can save you from the insecurities, it is empathic from the girl’s POV, she is saving him through her faith that her love will keep him safe.

Dedication was the first album without Alan Muir, replaced by Ian Mitchell on bass (he sadly died this year), on the only album he performed on. And Ian coulda been a contender, his lead vocal on the title track, not an easy one with its spoken word interludes, was handled with the ease we expect from BCR. On all streaming services you get Les’s take and Ian beats it by a nose. Mitchell absolutely looked the part, he was adorable, and if the band missed Alan, you can’t hear it. The seventeen year old, Irish lad quit Bay City Rollers after nine months because all the infighting (not to mention the unwanted regards of the manager) was too upsetting.

All of that upsetting of being in the Bay City Rollers bubbles on the surface of “Yesterday’s Hero”, a song I coulda sworn was by Woody and Eric, with the same rock glam for children they had perfected, and a storyline (imagining the end of success) with crowd noise as they worry “we don’t wanna be…” and fall into their epithet. It was, in fact, written by a former Easybeat who would definitely understand the form.

Dedication is an excellent album (the UK version I’d give a B+) at what it does, maintain the brand and improve just a little bit on it. From the Eric Carmen composed “Let’s Pretend” to the back of side two , all the songs are perfect glam rock pop for the teenyboppers with the promise of a little more. Notice Les’ excellent lead on “You’re A Woman” on the Woody-Eric softcore yacht rock. Bread beware. It fits and it clicks, standout art rocker “Are You Cuckoo” next to butter wouldn’t melt in its  mouth “Write A Letter” is just how the album goes.

Bad things would happen, but they wouldn’t happen this time.