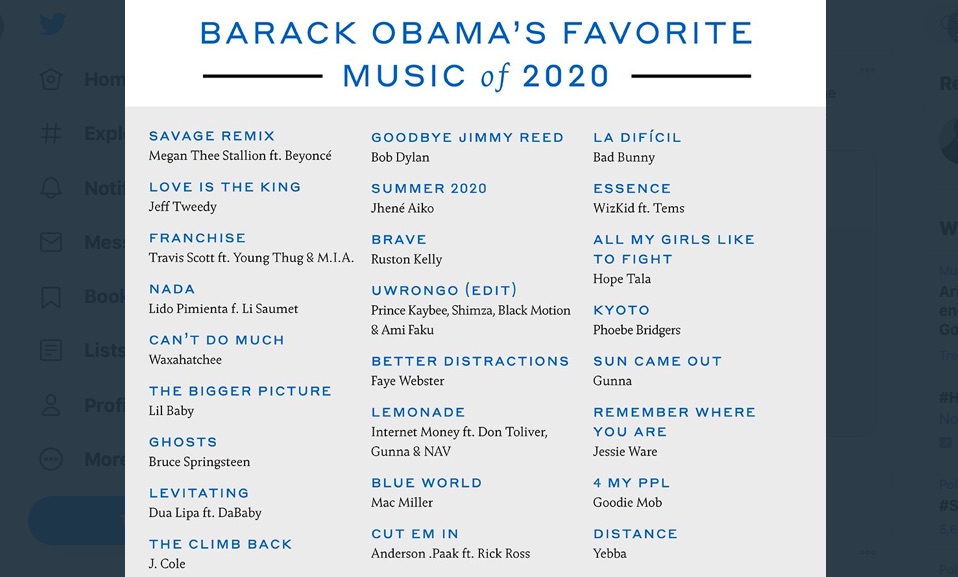 Barack Obama continues to be the hip( ex-)president he has always been, looking more in touch with pop culture and culture in general than he has ever been, and releasing his lists of favorite books, movies, TV shows, and music of 2020. Despite the current situation of complete confusion, endless isolation, and threatening contagion, Obama managed to publish his lists for this year, and the music list is remarkably in sync with this year‘s releases, while including some relatively obscure tracks and artists I had never heard about.

The list is a mix of highly recognizable names, from Megan Thee Stallion to Bruce Springsteen or Bob Dylan, side by side with some of the indie favorites of this year: Waxahatchee, Dua Lipa or Phoebe Bridgers or other sad girl Faye Webster (although less obvious to me). That’s the thing with Obama, he drops a bunch of famous names, like Jessie Ware, H.E.R., Bad Bunny, Mac Miller, a collaboration between Travis Scott, Young Thug, and M.I.A., another one between Anderson .Paak and Rick Ross, then he follows with a series of much more obscure discoveries. Country and alt-country have Jeff Tweedy, poignant balladeer Ruston Kelly, and the more upbeat Chris Stapleton, embedded between much more exotic ones: Colombian pop and collaboration between Lido Pimienta and Li Saumet, front-woman of Colombian group Bomba Estereo, an ambient African track by Uwrongo, a soulful sound with a hip hop twist by Atlanta collective, Spillage Village, voluptuous flamenco-injected instrumentations by Hope Tala, completed by the delicate jazzy soul of Yebba, and the sultry sexy vocals of Jhené Aiko. How does he find all these artists?

Contemporary rap is very present with echoes of last summer protests (Lil Baby, Goodie Mob)  but also J. Cole, Little Simz, another collaboration between Internet Money, Don Toliver, Gunna & NAV,… His list is actually filled with hip hop or hip hop-derived songs (12 out of 30) while I had to look up the names of 14 out of the 30 bands!

This is a very eclectic list, and I don’t believe a minute Obama had the time to compile all this by himself. If he admits having received some help from the ‘family music guru,’ his daughter Sasha — and this explains a lot — there is also an obvious desire to produce a very inclusive and international list, touching all the bases, almost all the genres, and countries. This is an interesting list, which has been curated with plenty of thoughts and consideration.